Welcome to the LitCharts study guide on Gillian Flynn's Gone Girl. Created by the original team behind SparkNotes, LitCharts are the world's best literature guides.

A concise biography of Gillian Flynn plus historical and literary context for Gone Girl.

A quick-reference summary: Gone Girl on a single page.

In-depth summary and analysis of every chapter of Gone Girl. Visual theme-tracking, too.

Explanations of Gone Girl's symbols, and tracking of where they appear.

An interactive data visualization of Gone Girl's plot and themes.

Gillian Flynn was born and raised in Kansas City, Missouri. The child of professor parents, Flynn was shy as a young girl and retreated into the world of books and writing. After receiving degrees from the University of Kansas and the prestigious Northwestern University, Flynn worked for years as a journalist and television critic, all the while writing her own stories in her spare time. With the publication of her critically acclaimed debut novel Sharp Objects in 2006, Flynn established herself as a major voice in the literary world. The themes and ideas she explored in her first book—violence, abuse, secrets and lies, and the false idea of the “innately good” woman—would go on to make her third novel, Gone Girl, a riotous bestseller and a veritable literary phenomenon. The novel sold two million copies in its first year and went on to be translated into 40 languages, adapted into a major motion picture, and hailed as one of the most shocking novels in contemporary literature. Flynn lives in Chicago with her husband and two children. She has also written a number of screenplays, including for Gone Girl.
Get the entire Gone Girl LitChart as a printable PDF.
"My students can't get enough of your charts and their results have gone through the roof." -Graham S.
Download 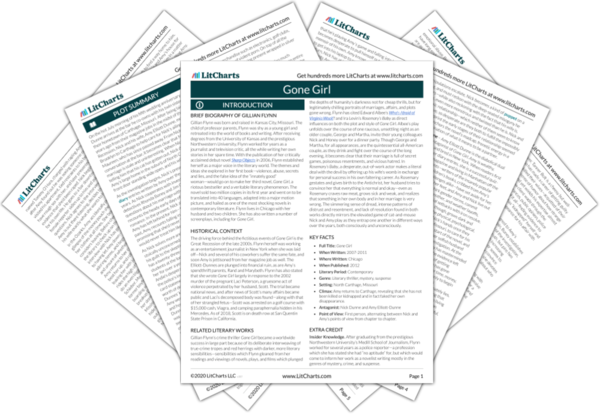 The driving force behind the fictitious events of Gone Girl is the Great Recession of the late 2000s. Flynn herself was working as an entertainment journalist in New York when she was laid off—Nick and several of his coworkers suffer the same fate, and soon Amy is jettisoned from her magazine job as well. The Elliott-Dunnes are plunged into financial ruin, as are Amy’s spendthrift parents, Rand and Marybeth. Flynn has also stated that she wrote Gone Girl largely in response to the 2002 murder of the pregnant Laci Peterson, a gruesome act of violence perpetrated by her husband, Scott. The trial became national news, and after news of Scott’s many affairs became public and Laci’s decomposed body was found—along with that of her strangled fetus—Scott was arrested on a golf course with $15,000 cash, Viagra, and camping paraphernalia hidden in his Mercedes. As of 2018, Scott is on death row at San Quentin State Prison in California.

Other Books Related to Gone Girl

Gillian Flynn’s crime thriller Gone Girl became a worldwide success in large part because of its deliberate interweaving of true-crime tropes and red herrings with darker, more literary sensibilities—sensibilities which Flynn gleaned from her readings and viewings of novels, plays, and films which plunged the depths of humanity’s darkness not for cheap thrills, but for legitimately chilling portraits of marriages, affairs, and plots gone wrong. Flynn has cited Edward Albee’s Who's Afraid of Virginia Woolf? and Ira Levin’s Rosemary’s Baby as direct influences on both the plot and style of Gone Girl. Albee’s play unfolds over the course of one raucous, unsettling night as an older couple, George and Martha, invite their young colleagues Nick and Honey over for a dinner party. Though George and Martha, for all appearances, are the quintessential all-American couple, as they drink and fight over the course of the long evening, it becomes clear that their marriage is full of secret games, poisonous resentments, and vicious hatred. In Rosemary’s Baby, a desperate, out-of-work actor makes a literal deal with the devil by offering up his wife’s womb in exchange for personal success in his own faltering career. As Rosemary gestates and gives birth to the Antichrist, her husband tries to convince her that everything is normal and okay—even as Rosemary craves raw meat, grows sick and weak, and realizes that something in her own body and in her marriage is very wrong. The simmering sense of dread, intense patterns of distrust and resentment, and lack of resolution found in both works directly mirrors the elevated game of cat-and-mouse Nick and Amy play as they entrap one another in different ways over the years, both consciously and unconsciously.
Key Facts about Gone Girl

Insider Knowledge. After graduating from the prestigious Northwestern University’s Medill School of Journalism, Flynn worked for several years as a police reporter—a profession which she has stated she had “no aptitude” for, but which would come to inform her work as a novelist writing mostly in the genres of mystery, crime, and suspense. 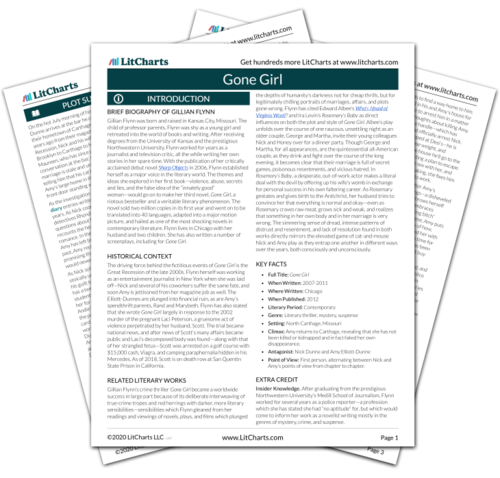 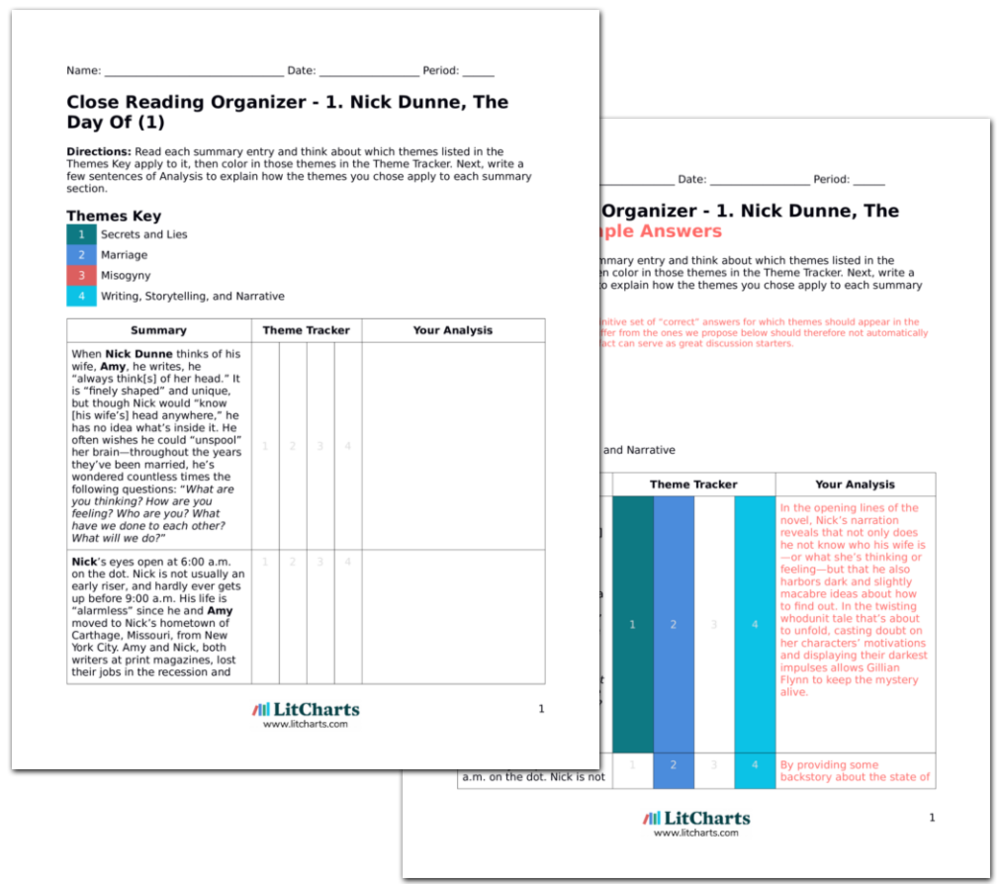