Download this LitChart! (PDF)
Teachers and parents! Struggling with distance learning? Our Teacher Edition on Gooseberries can help.

Welcome to the LitCharts study guide on Anton Chekhov's Gooseberries. Created by the original team behind SparkNotes, LitCharts are the world's best literature guides.

A concise biography of Anton Chekhov plus historical and literary context for Gooseberries.

A quick-reference summary: Gooseberries on a single page.

In-depth summary and analysis of every of Gooseberries. Visual theme-tracking, too.

Explanations of Gooseberries's symbols, and tracking of where they appear.

An interactive data visualization of Gooseberries's plot and themes.

Anton Chekov was raised in Taganrog, a port city in Southern Russia. Chekov’s mother was a wonderful storyteller and instilled a love of stories in Chekov and his five siblings—his father, however, had a volatile personality and often mishandled money. This culminated in Chekov’s parents and siblings fleeing to Moscow in 1876 so that his father could avoid debtor’s prison, leaving the teenage Chekov behind in Taganrog to finish his education. Chekov did odd jobs to fund his studies and support his family, all the while reading a wide range of literature in his spare time. In 1879, he was admitted to medical school at I.M. Sechenov First Moscow State Medical University. To support himself and his family while attending school, he published short, satirical vignettes of Russian life in newspapers. By 1884, Chekov had become a practicing doctor, though he made little money and treated the poor for free. Over the next decade, he became chronically ill with tuberculosis but hid his condition from his friends and family, continuing to write short stories that garnered praise from literary critics. Chekov also began to travel throughout Eastern Europe and even to a penal colony in Japan, experiences that deeply influenced his writing. In 1898, after his father’s death, Chekov built a villa in Yalta, Crimea, where he continued to write stories and plays. He married actress Olga Knipper in 1901. Chekov eventually succumbed to his tuberculosis in 1904, after which his writing continued to receive critical acclaim. He is widely considered to be one of the greatest short story writers and playwrights of all time.
Get the entire Gooseberries LitChart as a printable PDF.
"My students can't get enough of your charts and their results have gone through the roof." -Graham S.
Download 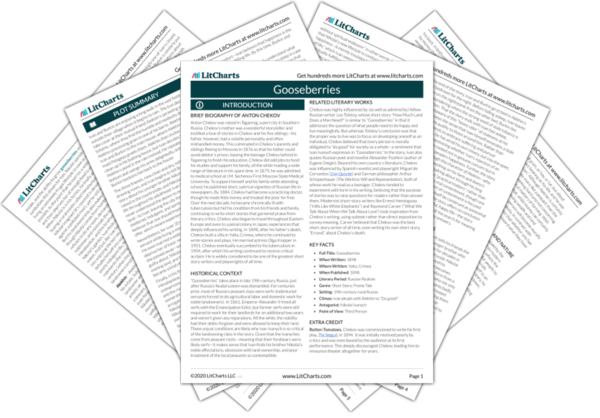 “Gooseberries” takes place in late 19th-century Russia, just after Russia’s feudal system was dismantled. For centuries prior, most of Russia’s peasant class were serfs (indentured servants forced to do agricultural labor and domestic work for noble landowners). In 1861, Emperor Alexander II freed all serfs with the Emancipation Edict, but former serfs were still required to work for their landlords for an additional two years and weren’t given any reparations. All the while, the nobility had their debts forgiven and were allowed to keep their land. These unjust conditions are likely why Ivan Ivanych is so critical of the landowning class in the story. Given that the Ivanyches come from peasant roots—meaning that their forebears were likely serfs—it makes sense that Ivan finds his brother Nikolai’s noble affectations, obsession with land ownership, and poor treatment of the local peasants so contemptible.

Other Books Related to Gooseberries

Chekov was highly influenced by (as well as admired by) fellow Russian writer Leo Tolstoy, whose short story “How Much Land Does a Man Need?” is similar to “Gooseberries” in that it addresses the question of what people need to be happy and live meaningfully. But whereas Tolstoy’s conclusion was that the proper way to live was to focus on developing oneself as an individual, Chekov believed that every person is morally obligated to “do good” for society as a whole—a sentiment that Ivan Ivanych expresses in “Gooseberries.” In the story, Ivan also quotes Russian poet and novelist Alexander Pushkin (author of Eugene Onegin). Beyond his own country’s literature, Chekov was influenced by Spanish novelist and playwright Miguel de Cervantes (Don Quixote) and German philosopher Arthur Schopenhauer (The World as Will and Representation), both of whose work he read as a teenager. Chekov tended to experiment with form in his writing, believing that the purpose of stories was to raise questions for readers rather than answer them. Modernist short-story writers like Ernest Hemingway (“Hills Like White Elephants”) and Raymond Carver (“What We Talk About When We Talk About Love”) took inspiration from Chekov’s writing, using subtext rather than direct exposition to convey meaning. Carver believed that Chekov was the best short-story writer of all time, even writing his own short story, “Errand,” about Chekov’s death.
Key Facts about Gooseberries

Rotten Tomatoes. Chekov was commissioned to write his first play, The Seagull, in 1894. It was initially received poorly by critics and was even booed by the audience at its first performance. This deeply discouraged Chekov, leading him to renounce theater altogether for years. 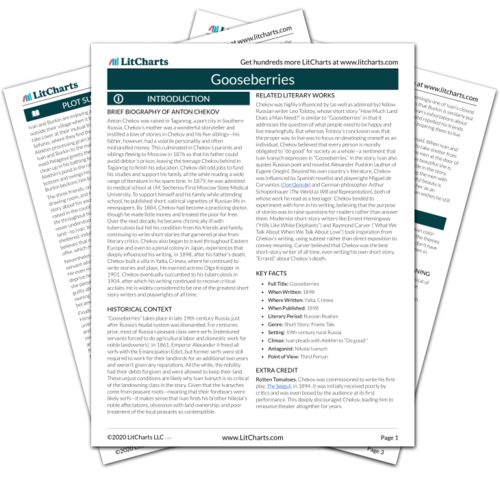 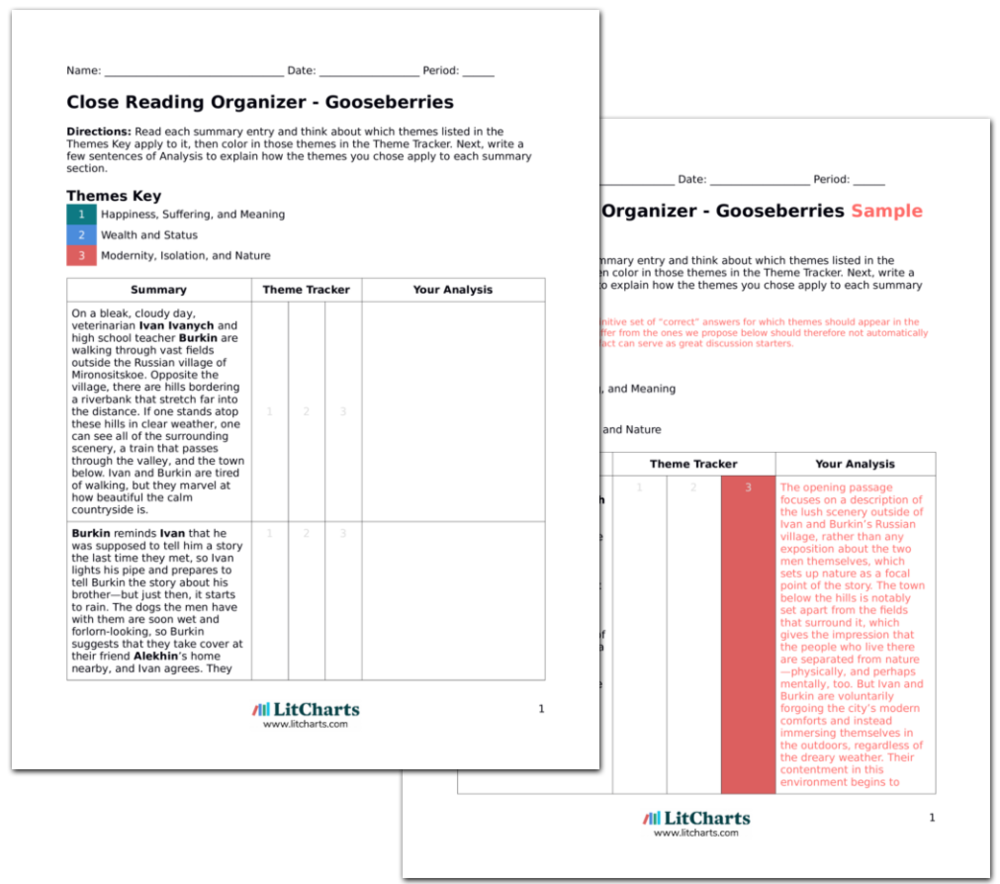