Download this LitChart! (PDF)
Teachers and parents! Struggling with distance learning? Our Teacher Edition on Gorilla, My Love can help.

Welcome to the LitCharts study guide on Toni Cade Bambara's Gorilla, My Love. Created by the original team behind SparkNotes, LitCharts are the world's best literature guides.

A concise biography of Toni Cade Bambara plus historical and literary context for Gorilla, My Love.

A quick-reference summary: Gorilla, My Love on a single page.

In-depth summary and analysis of every of Gorilla, My Love. Visual theme-tracking, too.

Explanations, analysis, and visualizations of Gorilla, My Love's themes.

Gorilla, My Love's important quotes, sortable by theme, character, or .

Description, analysis, and timelines for Gorilla, My Love's characters.

Explanations of Gorilla, My Love's symbols, and tracking of where they appear.

An interactive data visualization of Gorilla, My Love's plot and themes.

Toni Cade Bambara was born Miltona Mirkin Cade in Harlem and raised by a single mother. She earned her B.A. in theater arts and English at Queens College and her M.A. in modern American fiction from City College of the City University of New York. She worked as a social worker and occupational therapist while pursuing her master’s degree. Later, Bambara taught at City College, Rutgers University, and Spellman College. She took the name Bambara in 1969 after finding it in one of her great-grandmother’s sketchbooks. In 1970, she published and edited The Black Woman: An Anthology, which consisted of writing from African American women of various class backgrounds. In 1972, she published Gorilla, My Love—her first short story collection. From 1973 to 1975, she visited Cuba and Vietnam to learn about women’s political movements in each country. Themes of racial, gender, and class justice also featured prominently in her second collection of short stories, The Sea Birds Are Still Alive (1977), and in her first novel, The Salt Eaters (1980). The latter won the American Book Award in 1981. Bambara and her daughter relocated to Philadelphia in the 1980s, where she wrote two novels and nine screenplays. She died of colon cancer at the age of 56.
Get the entire Gorilla, My Love LitChart as a printable PDF.
"My students can't get enough of your charts and their results have gone through the roof." -Graham S.
Download 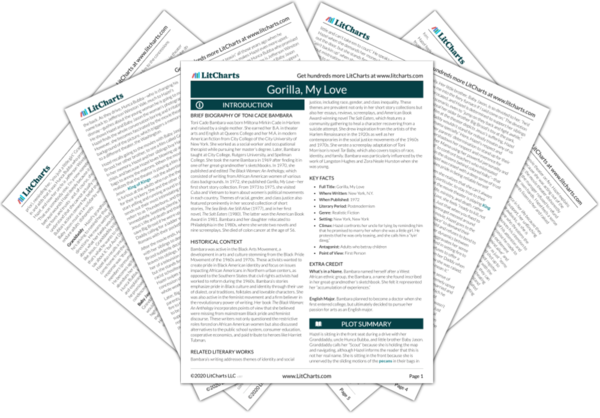 Historical Context of Gorilla, My Love

Bambara was active in the Black Arts Movement, a development in arts and culture stemming from the Black Pride Movement of the 1960s and 1970s. These activists wanted to create pride in Black American identity and focus on issues impacting African Americans in Northern urban centers, as opposed to the Southern States that civil rights activists had worked to reform during the 1960s. Bambara’s stories emphasize pride in Black culture and identity through their use of dialect, oral traditions, folktales and loveable characters. She was also active in the feminist movement and a firm believer in the revolutionary power of writing. Her book The Black Woman: An Anthology incorporates points of view that she believed were missing from mainstream Black pride and feminist discourse. These writers not only questioned the restrictive roles forced on African American women but also discussed alternatives to the public school system, consumer education, cooperative economics, and paid tribute to heroes like Harriet Tubman.

Other Books Related to Gorilla, My Love

Bambara’s writing addresses themes of identity and social justice, including race, gender, and class inequality. These themes are prevalent not only in her short story collections but also her essays, reviews, screenplays, and American Book Award-winning novel The Salt Eaters, which features a community gathering to heal a character recovering from a suicide attempt. She drew inspiration from the artists of the Harlem Renaissance in the 1920s as well as her contemporaries in the social justice movements of the 1960s and 1970s. She wrote a screenplay adaptation of Toni Morrison’s novel Tar Baby, which also covers topics of race, identity, and family. Bambara was particularly influenced by the work of Langston Hughes and Zora Neale Hurston when she was young.
Key Facts about Gorilla, My Love

Extra Credit for Gorilla, My Love

What’s in a Name. Bambara named herself after a West African ethnic group, the Bambara, a name she found inscribed in her great-grandmother’s sketchbook. She felt it represented her “accumulation of experiences.”

English Major. Bambara planned to become a doctor when she first entered college, but ultimately decided to pursue her passion for arts as an English major. 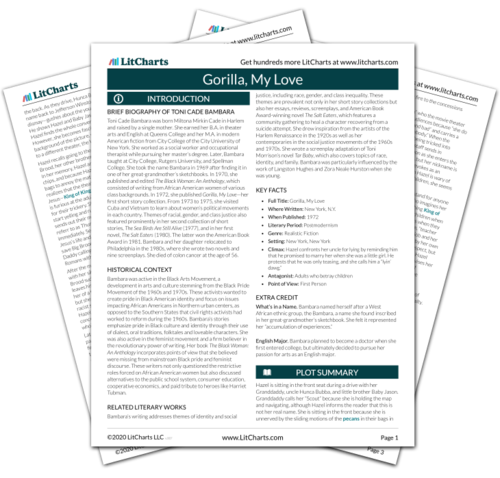 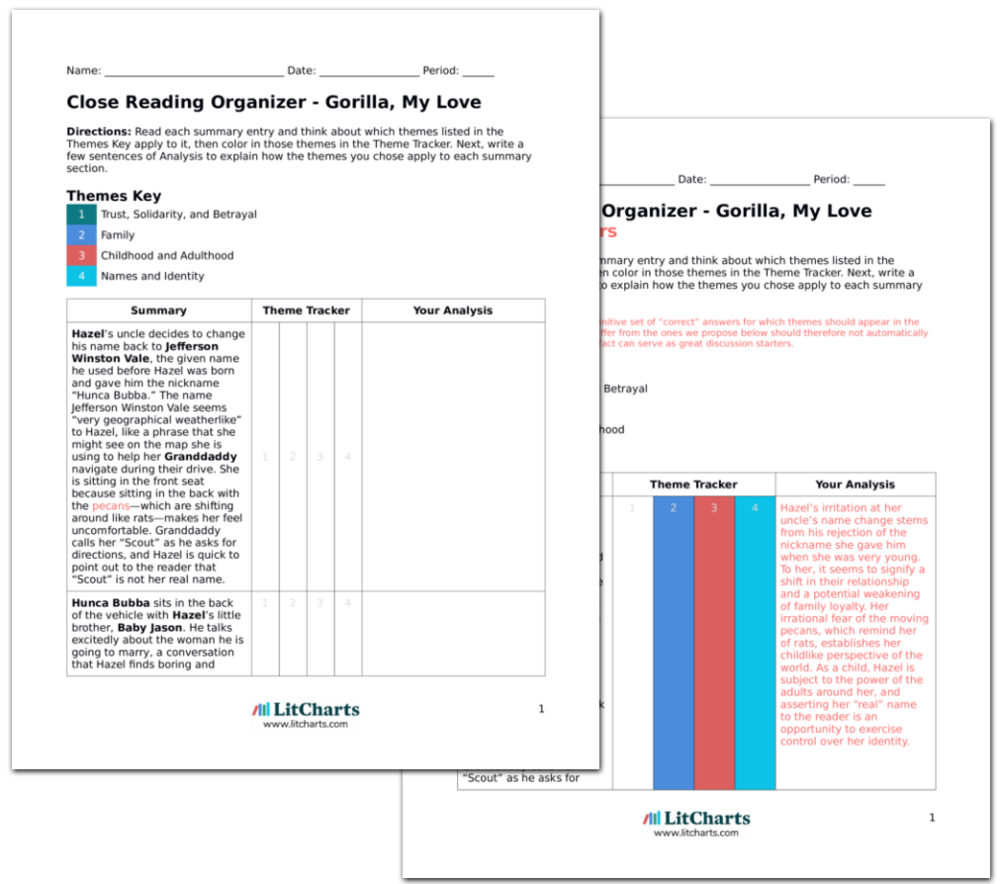