Download this LitChart! (PDF)
Teachers and parents! Struggling with distance learning? Our Teacher Edition on Grace can help.

Welcome to the LitCharts study guide on James Joyce's Grace. Created by the original team behind SparkNotes, LitCharts are the world's best literature guides.

A concise biography of James Joyce plus historical and literary context for Grace.

A quick-reference summary: Grace on a single page.

In-depth summary and analysis of every of Grace. Visual theme-tracking, too.

Explanations of Grace's symbols, and tracking of where they appear.

An interactive data visualization of Grace's plot and themes.

James Joyce grew up in Rathgar, a suburb of Dublin, and studied at University College, where he began to publish literary reviews, poems, and plays. After college, he moved to Paris, where he briefly studied medicine. In 1903, just one year later, Joyce’s mother got sick, and he moved back to Dublin to take care of her. After meeting his wife Nora Barnacle, a chambermaid from Galway, the couple left Dublin and lived in various European countries, including Yugoslavia and Italy. They later fled to Zurich during World War I. Joyce only returned to Dublin four times after moving away, but much of his writing remained heavily focused on the city or on Ireland more generally. Two years after publishing his first book, Dubliners (the short-story collection that includes “Grace”), Joyce received guidance from the poet Ezra Pound that helped him publish his first novel, A Portrait of the Artist as a Young Man, in 1916. These books brought Joyce some fame and a reputation as one of the foremost Modernist writers, which only increased after the publication of his highly experimental book Ulysses (1922), which was both hailed as a masterpiece and banned in numerous countries for indecency. Joyce continued writing after Ulysses, producing the even more avant-garde Finnegans Wake in 1939. Joyce was always a heavy drinker, and he died in 1941 from complications of surgery on a perforated ulcer.
Get the entire Grace LitChart as a printable PDF.
"My students can't get enough of your charts and their results have gone through the roof." -Graham S.
Download 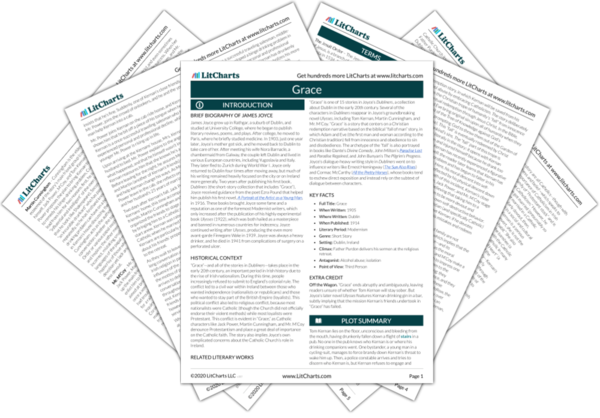 “Grace”—and all of the stories in Dubliners—takes place in the early 20th century, an important period in Irish history due to the rise of Irish nationalism. During this time, people increasingly refused to submit to England’s colonial rule. The conflict led to a civil war within Ireland between those who wanted independence (nationalists or republicans) and those who wanted to stay part of the British Empire (loyalists). This political conflict also led to religious conflict, because most nationalists were Catholic (though the Church did not officially endorse their violent methods) while most loyalists were Protestant. This conflict is evident in “Grace,” as Catholic characters like Jack Power, Martin Cunningham, and Mr. M’Coy denounce Protestantism and place a great deal of importance on the Catholic faith. The story also implies Joyce’s own complicated concerns about the Catholic Church’s role in Ireland.

Other Books Related to Grace

“Grace” is one of 15 stories in Joyce’s Dubliners, a collection about Dublin in the early 20th century. Several of the characters in Dubliners reappear in Joyce’s groundbreaking novel Ulysses, including Tom Kernan, Martin Cunningham, and Mr. M’Coy. “Grace” is a story that centers on a Christian redemption narrative based on the biblical “fall of man” story, in which Adam and Eve (the first man and woman according to the Christian tradition) fell from innocence and obedience to sin and disobedience. The archetype of the “fall” is also portrayed in books like Dante’s Divine Comedy, John Milton’s Paradise Lost and Paradise Regained, and John Bunyan’s The Pilgrim’s Progress. Joyce’s dialogue-heavy writing style in Dubliners went on to influence writers like Ernest Hemingway (The Sun Also Rises) and Cormac McCarthy (All the Pretty Horses), whose books tend to eschew direct exposition and instead rely on the subtext of dialogue between characters.
Key Facts about Grace

Off the Wagon. “Grace” ends abruptly and ambiguously, leaving readers unsure of whether Tom Kernan will stay sober. But Joyce’s later novel Ulysses features Kernan drinking gin in a bar, subtly implying that the mission Kernan’s friends undertook in “Grace” has failed. 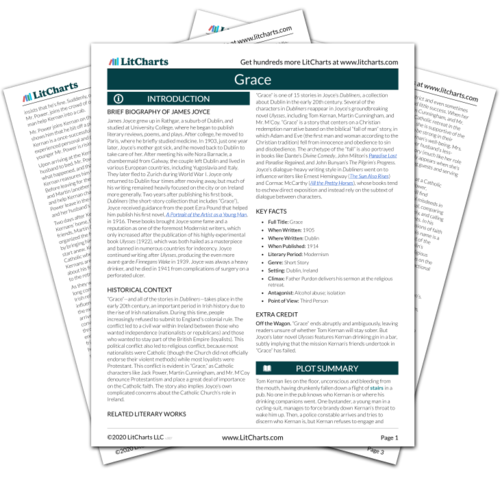 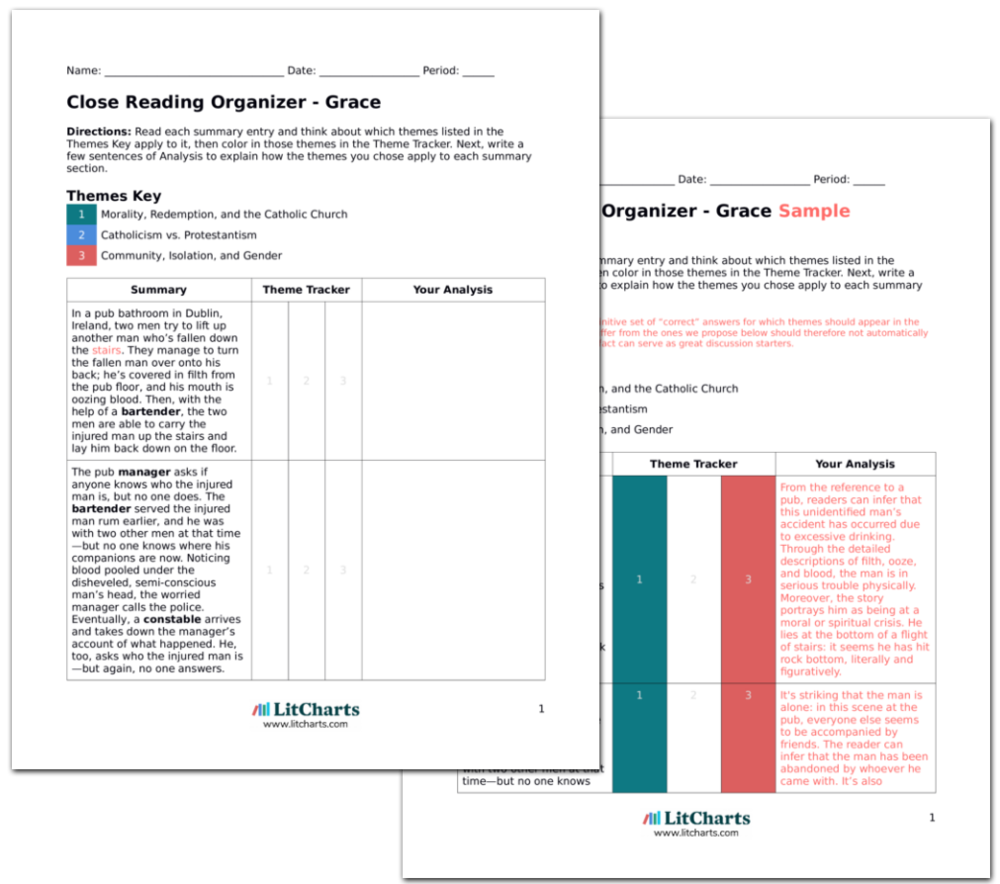