In Grit, psychologist Angela Duckworth argues that, contrary to popular belief, the secret to extraordinary achievement isn’t talent, “genius,” or IQ, but rather effort. Specifically, over more than a decade of intensive psychological research, Duckworth has found that the most successful people tend to have grit—which combines a sustained commitment to specific long-term goals (or passion) with the ability to work tirelessly toward those goals and easily bounce back from failure (or perseverance).

Grit predicts achievement because it fosters the most effective approach to problem-solving. Gritty people clearly understand what they want to accomplish and why. They dedicate time and energy to building the skills they need to succeed, then consistently apply those skills until they do. Perhaps most importantly, they never give up on their primary goals. Duckworth’s book has three parts. In the first, she introduces the fundamentals of grit. Next, she explains how to identify and develop the four key traits of grit—interest, practice, purpose, and hope. Finally, she teaches parents, educators, and leaders how to help others cultivate grit.

Duckworth opens by recalling how, when she was growing up, her father always told her that she was “no genius.” Like many people, he believed that talent is inherent and fixed. But ironically, Duckworth won a MacArthur “Genius Grant” for proving him wrong and showing that grit matters more than talent. For instance, at the U.S. Military Academy at West Point, academic scores and athletic performance don’t predict who makes it through the grueling six-week summer program called Beast Barracks. But grit does, at least when measured by Duckworth’s Grit Scale questionnaire. Similarly, Duckworth has found that grittier salespeople are more likely to stay in their jobs, grittier high schoolers are more likely to graduate, and grittier spelling bee contestants are more likely to make it far in the National Spelling Bee.

Duckworth first became interested in grit while teaching middle-school math in New York City. She realized that her hardworking students earned higher grades than her more mathematically talented students, which flew in the face of conventional wisdom—most Americans attribute success to talent, not hard work. So does McKinsey, the prestigious consulting firm where Duckworth worked before becoming a teacher. But focusing on talent has clear downsides. For instance, students who see themselves as untalented tend to give up on academic challenges rather than working to improve their skills. In other words, people who focus on talent miss out on the opportunity to grow.

Yet all the scientific evidence shows that true achievement almost always comes from hard work. It’s tempting to attribute the success of extraordinary athletes and artists to natural talent, especially because that suggests that normal people haven’t done anything wrong and can’t possibly hope to compete with them. But, in reality, anyone can achieve greatness if they work hard enough, under the right conditions. Duckworth explains her theory of achievement in two equations: “talent × effort = skill,” and then “skill × effort = achievement.” Notably, “effort counts twice.” That’s why grit is so much more important than talent. Accomplished figures like lifelong potter Warren MacKenzie and dyslexic novelist John Irving show that to truly achieve great things, people must work hard to build their skills and then work just as hard to apply them.

Duckworth includes her Grit Scale and encourages the reader to measure their own grit. The scale uses 10 questions to measure grit’s two key components: passion and perseverance. Passion isn’t about committing to something very intensely for a short period of time, but rather about pursuing the “same ultimate goal in an abiding, loyal, steady way” over the course of years. Gritty people understand how all of their smaller goals fit into their quest for their major goal, which guides them through life like a compass. They also persevere in difficult situations, like longtime New Yorker cartoonist Bob Mankoff, who sent thousands of cartoons to the magazine in the 1970s before it finally accepted his first one. Fortunately, Duckworth explains, people’s grit scores tend to change over time, which shows that both passion and perseverance can be learned. So can gritty people’s four key underlying traits: interest, practice, purpose, and hope.

First, gritty people almost always genuinely love what they do, which strongly motivates them to succeed at it. But people don’t find their interests in a flash of inspiration—instead, they have to gradually discover and develop them over time. Duckworth argues that young people should experiment with a wide variety of different interests—and it’s fine to discard ones that aren’t a good fit. Later, as gritty people age, they deepen their interests: they stick with their field but learn to find novelty and excitement within it.

Second, gritty people put in endless practice to improve their skills. Specifically, they put in years of what psychologist Anders Ericsson calls deliberate practice, which means they identify their weaknesses and working as hard as possible to improve them. While deliberate practice is a grueling and repetitive way to develop skills, when gritty people actually use those skills, they often experience the state of total immersion and concentration known as flow.

Third, gritty people generally feels a sense of purpose, which means that they do their work in part because it benefits other people. Of course, they can also be motivated by self-interest—in fact, the combination of selfish and other-oriented motives tends to be most effective. To find a sense of purpose, Duckworth argues, young people should look for the connections between their work and their values, and they should seek out role models who also live purposefully.

Fourth and finally, gritty people have hope—specifically, they believe that they can overcome obstacles and improve their lives through their own effort. Psychologists Marty Seligman and Steve Maier have famously shown that people and animals who are exposed to uncontrollable suffering often learn to view themselves as helpless, while those who have some control over their suffering often become more optimistic and resilient. In fact, optimists are generally healthier, grittier, and more successful. They believe that they can overcome obstacles, so they try much harder to do so—and often, they succeed. Similarly, psychologist Carol Dweck has found that people with a growth mindset (who believe that they can improve their abilities through effort) tend to perform much better over time than those with a fixed mindset (who think that their level of ability is set in stone). Like Seligman and Maier, Dweck has shown that the key to developing a growth mindset is overcoming obstacles early in life.

In her last three chapters, Duckworth asks how people can teach others grit. First, she examines parenting. Some parents, like football player Steve Young’s, believe that strict rules and high expectations are the key to raising gritty children. Others, like comedian Francesca Martinez’s, favor “unconditional affection and support.” But really, both are right: effective parents (and other adult role models) have to be both supportive and demanding. In other words, they have high standards for young people but support them through the process of achieving those standards.

Duckworth concludes by reiterating that the importance of grit is good news for her readers. If inherent talent were the only route to success, most people would simply have to give up, since few people are born geniuses. But since grit is more important—and it’s possible to become grittier over time—anyone can become a genius and succeed if they work hard enough. 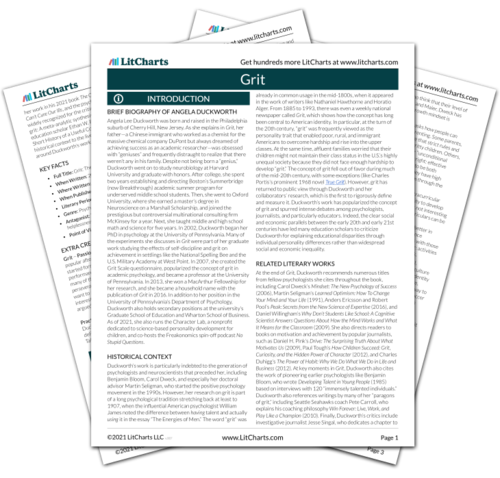 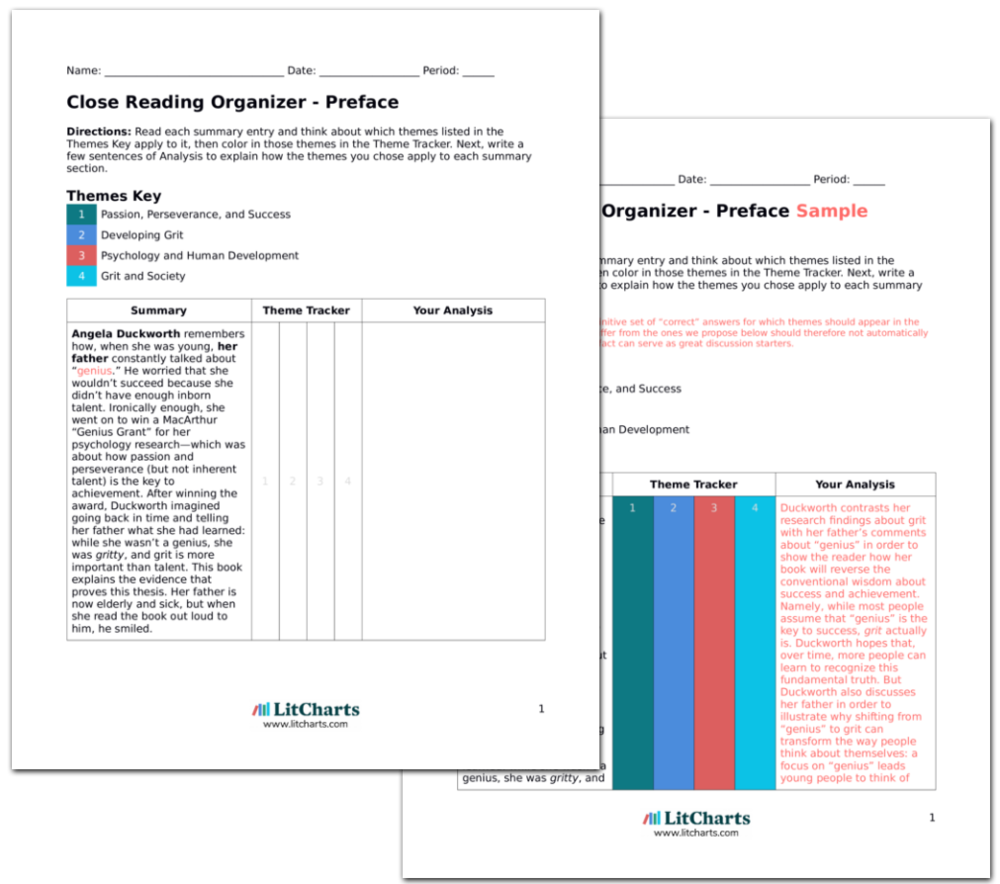