One of the most important aspects of Diamond’s theory of geographic determinism is the concept of diffusion: the many different ways that technologies, ideas, goods, and resources are transported and spread both within a society and between separate societies.

One of the most important and representative forms of diffusion that Diamond discusses is trade. Trade is particularly important because it often involves the literal exchange of goods and ideas, meaning that a society that trades with its neighbors can benefit from its neighbors’ natural resources and its intellectual breakthroughs. A society that trades with its neighbors can remain on the cutting edge: either the society itself discovers an important resource or idea, or a neighboring society does and the first society acquires it through trade. In many ways, Diamond suggests that a society would be better off in the long run with normal citizens and connections to many neighbors than with brilliantly talented citizens but no neighbors to trade with. No matter how advanced and self-sufficient a society might be, there are big historical advantages to trading with neighbors. This is one reason why China, a highly technologically advanced society that deliberately cut itself off from other societies during the 15th century, fell behind Europe, a less technologically advanced region that nonetheless benefited from diffusion between itself many other cultures.

One “side effect” of trade between societies—but also a form of diffusion in its own right—is the spread of disease, since societies exchange germs and viruses when they interact. While the spread of disease has caused countless deaths, it also acts as a net benefit to dense, agriculture-based societies. Frankly put, the steady diffusion of disease strengthens large populations by gradually eliminating humans with weak immune systems and replacing them with humans with stronger immune systems. The result is that societies benefit from “germ diffusion,” building up immunities to deadly diseases like smallpox—furthermore, when such societies encounter a non-agricultural society that’s never participated in large-scale diffusion, the latter society is often wiped out by the spread of unfamiliar new diseases. Large agricultural societies benefit greatly from the diffusion of diseases, but not because of any deliberate action on their part—emphasizing the role of “geographic luck” in history.

In all, diffusion generally benefits the societies that participate, whether they’re fully aware of what they’re gaining or not. The role of diffusion in Guns, Germs, and Steel reinforces the importance of environment in human history, and, more abstractly, the notion that history is largely beyond conscious human control. 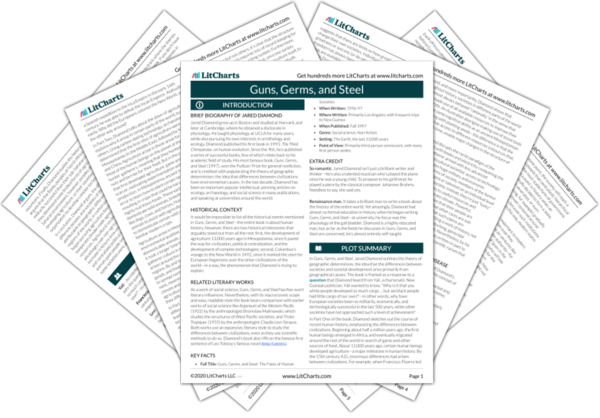 Diffusion, Trade, and Disease Quotes in Guns, Germs, and Steel

Below you will find the important quotes in Guns, Germs, and Steel related to the theme of Diffusion, Trade, and Disease.
Chapter 4 Quotes

As we'll see, food production was indirectly a prerequisite for the development of guns, germs, and steel. Hence geographic variation in whether, or when, the peoples of different continents became farmers and herders explains to a large extent their subsequent contrasting fates.

The same pattern of an abrupt start of food production dependent on domesticates from elsewhere, and an abrupt and massive population replacement, seems to have repeated itself in many areas in the prehistoric era. In the absence of written records, the evidence of those prehistoric replacements must be sought in the archaeological record or inferred from linguistic evidence.

Plant domestication is not a matter of hunter-gatherers domesticating a single plant and otherwise carrying on unchanged with their nomadic lifestyle. Suppose that North American wild apples really would have evolved into a terrific crop if only Indian hunter-gatherers had settled down and cultivated them. But nomadic hunter-gatherers would not throw over their traditional way of life, settle in villages, and start tending apple orchards unless many other domesticable wild plants and animals were available to make a sedentary food-producing existence competitive with a hunting-gathering existence.

Why was the spread of crops from the Fertile Crescent so rapid? The answer depends partly on that east-west axis of Eurasia with which I opened this chapter. Localities distributed east and west of each other at the same latitude share exactly the same day length and its seasonal variations. To a lesser degree, they also tend to share similar diseases, regimes of temperature and rainfall, and habitats or biomes (types of vegetation).

Given enough time, the societies lacking writing might also have eventually developed it on their own. Had they been located nearer to Sumer, Mexico, and China, they might instead have acquired writing or the idea of writing from those centers, just as did India, the Maya, and most other societies with writing. But they were too far from the first centers of writing to have acquired it before modern times.

This cultural barrier at Torres Strait is astonishing only because we may mislead ourselves into picturing a full-fledged New Guinea society with intensive agriculture and pigs 10 miles off the Australian coast. In reality, Cape York Aborigines never saw a mainland New Guinean. Instead, there was trade between New Guinea and the islands nearest New Guinea, then between those islands and Mabuiag Island halfway down the strait, then between Mabuiag Island and Badu Island farther down the strait, then between Badu Island and Muralug Island, and finally between Muralug and Cape York.

Many readers may already be protesting: don't stereotype people by classifying them into arbitrary "races"! Yes, I acknowledge that each of these so-called major groups is very diverse. To lump people as different as Zulus, Somalis, and Ibos under the single heading of "blacks" ignores the differences between them. We ignore equally big differences when we lump Africa's Egyptians and Berbers with each other and with Europe's Swedes under the single heading of "whites." In addition, the divisions between blacks, whites, and the other major groups are arbitrary, because each such group shades into others: all human groups on Earth have mated with humans of every other group that they encountered.