Download this LitChart! (PDF)
Teachers and parents! Struggling with distance learning? Our Teacher Edition on Hag-Seed can help.

Welcome to the LitCharts study guide on Margaret Atwood's Hag-Seed. Created by the original team behind SparkNotes, LitCharts are the world's best literature guides.

A concise biography of Margaret Atwood plus historical and literary context for Hag-Seed.

A quick-reference summary: Hag-Seed on a single page.

In-depth summary and analysis of every chapter of Hag-Seed. Visual theme-tracking, too.

Explanations of Hag-Seed's symbols, and tracking of where they appear.

An interactive data visualization of Hag-Seed's plot and themes.

The second of three children, Margaret Atwood was born in 1939 in Ottawa. Because her father was an entomologist frequently conducting field research, Atwood spent much of her childhood in the wilderness of Quebec, only attending school sporadically (an unusual lifestyle that reemerges in her novel Cat’s Eye). However, she became an avid reader at a young age, and by her teenage years, she was determined to become a professional writer. After graduating from the University of Toronto in 1961, Atwood published some collections of poetry, followed by her first novel, The Edible Woman. Throughout the next decades Atwood taught writing at various Canadian universities, while writing prolifically and becoming widely acclaimed. Today, she’s published sixteen novels, seventeen collections of poetry, as well as collections of essays, short stories, and children’s books. She’s best-known for her 1985 novel The Handmaid’s Tale, which envisions a dystopian misogynist regime taking over America, and which has been adapted into a successful television series. Atwood’s partner since the 1970s is Canadian novelist Graeme Gibson; the couple have one daughter, Eleanor Gibson.
Get the entire Hag-Seed LitChart as a printable PDF.
"My students can't get enough of your charts and their results have gone through the roof." -Graham S.
Download 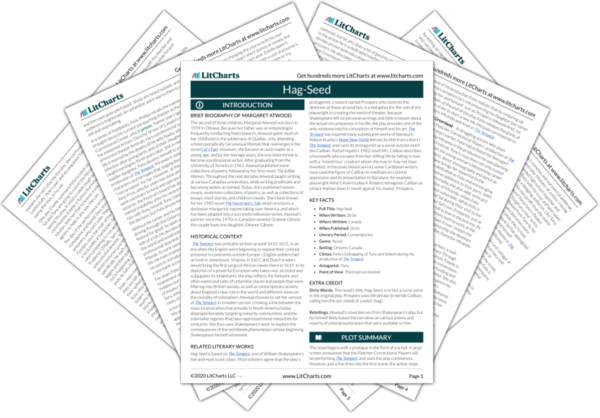 The Tempest was probably written around 1610-1611, in an era when the English were beginning to expand their colonial presence in continents outside Europe—English settlers had arrived in Jamestown, Virginia, in 1607, and Dutch traders would bring the first cargo of African slaves there in 1619. In its depiction of a powerful European who takes over an island and subjugates its inhabitants, the play reflects the fantastic and often exoticized tales of unfamiliar places and people that were filtering into British society, as well as contemporary anxiety about England’s new role in the world and different views on the morality of colonialism. Atwood chooses to set her version of The Tempest in a modern prison, creating a link between the mass incarceration that prevails in North America today, disproportionately targeting minority communities, and the colonialist regimes that have oppressed those minorities for centuries. She thus uses Shakespeare’s work to explore the consequences of the worldwide phenomenon whose beginning Shakespeare himself witnessed.

Other Books Related to Hag-Seed

Hag-Seed is based on The Tempest, one of William Shakespeare’s last and most iconic plays. Most scholars agree that the play’s protagonist, a wizard named Prospero who controls the destinies of those around him, is a metaphor for the role of the playwright in creating the world of theater; because Shakespeare left no personal writings and little is known about the actual circumstances in his life, the play provides one of the only windows into his conception of himself and his art. The Tempest has inspired many subsequent works of literature. Aldous Huxley’s Brave New World derives its title from a line in The Tempest, and casts its protagonist as a social outcast much like Caliban. Rachel Ingalls’s 1982 novel Mrs. Caliban describes a housewife who escapes from her stifling life by falling in love with a “monstrous” creature whom she may or may not have invented. In the postcolonial period, some Caribbean writers have used the figure of Caliban to meditate on colonial oppression and its presentation in literature: for example, playwright Aimé Césaire’s play A Tempest reimagines Caliban as a black Haitian slave in revolt against his master, Prospero.
Key Facts about Hag-Seed

Dirty Words. The novel’s title, Hag-Seed, is in fact a curse word in the original play. Prospero uses the phrase to deride Caliban, calling him the son (seed) of a witch (hag).

Retellings. Atwood’s novel derives from Shakespeare’s play, but he himself likely based the narrative on various poems and reports of colonial exploration that were available to him. 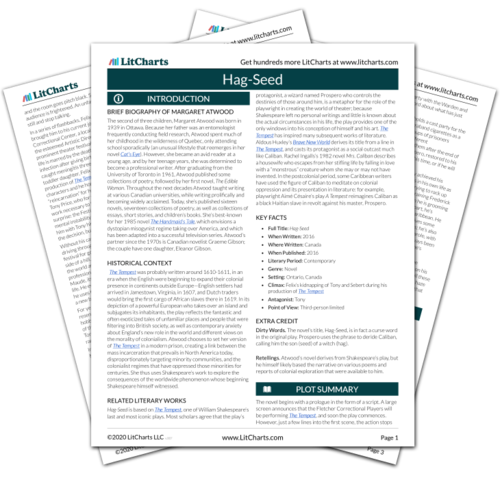 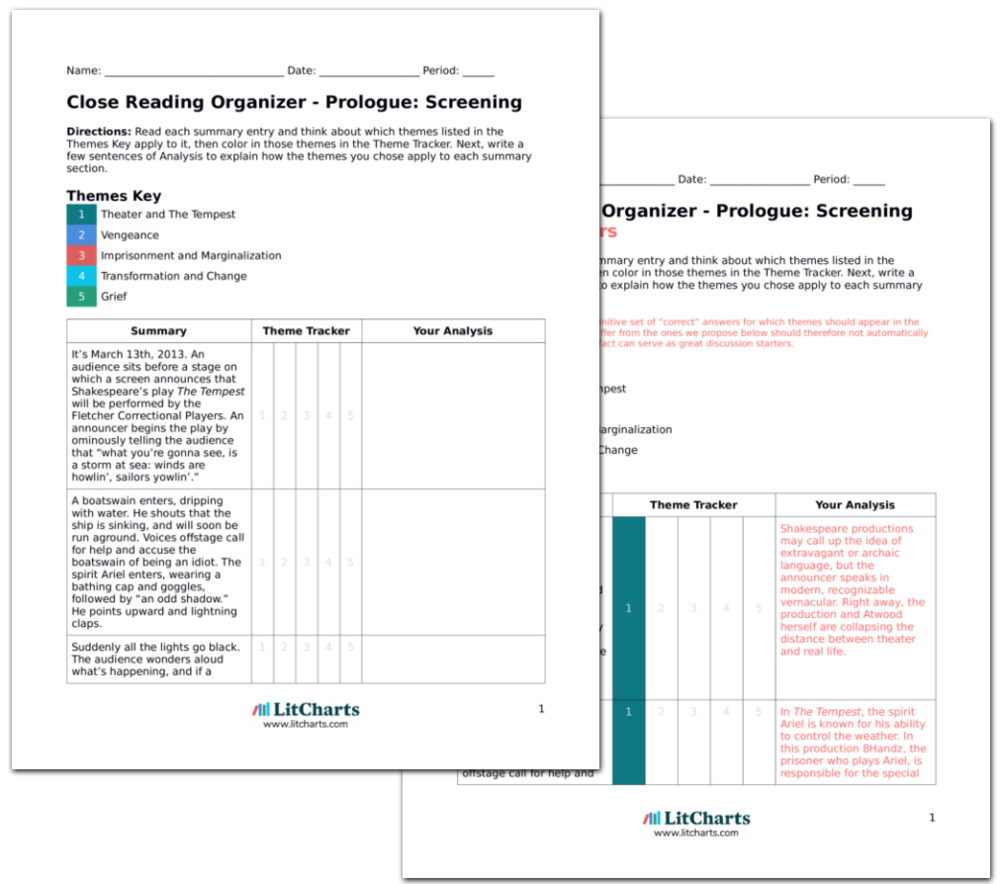