In Harry Potter and the Half-Blood Prince, a brave teenage wizard fights against his increasingly powerful enemy, Lord Voldemort. While Harry and his best friends, Ron and Hermione, have faced challenges from Voldemort since their childhood, they’ve usually been supported and protected by powerful adult figures. However, in this installment of the series many of these adults die or prove unable to fight Voldemort, forcing the trio to take a riskier and more independent role in the struggle. For Harry and his friends, growing up is linked to the loss of loved ones and the increasing awareness of their own vulnerable position. While the novel applauds the trio’s development into brave and competent young adults, it presents coming of age not as a gradual and positive process but an abrupt and often painful reckoning with one’s own mortality.

The novel is bookended by the deaths of the two most important parental figures in Harry’s life. It opens with Harry’s devastation at his godfather Sirius’s death at the end of Order of the Phoenix. The strongest link to Harry’s biological parents, Sirius has been a source of advice and support since the third book, and Harry has always hoped to make a home with his godfather – a possibility now abruptly closed off.

At the end of novel, Dumbledore himself is killed when Death Eaters storm the castle. Since the start of the series he’s made most of the major decisions about Harry’s life; when he reprimands the Dursleys at the beginning of the novel for failing to adequately care for Harry, he implicitly contrasts their neglect with the protection and care he’s provided, if often from a distance. Throughout Half-Blood Prince he takes on an additional mentoring role by giving Harry private classes, and Harry displays his growing sense of closeness with Dumbledore by taking his side in a quarrel with Rufus Scrimgeour, proudly telling the Minister of Magic that he’s “Dumbledore’s man through and through.” By stressing their bond throughout the year, the novel creates the sense that at its end Harry loses not just a teacher but a parent.

It’s not just Harry who suffers the loss of trusted authority figures. At one point Hannah Abbott, another student in their year, finds out suddenly that her mother has been killed. Additionally, at the beginning of the novel Cornelius Fudge comments to the Muggle Prime Minister on a series of murders, including of Amelia Bones, head of the Department of Magical Law Enforcement. The sudden loss of someone entrusted with protecting the entire Wizarding community reflects on a larger scale the losses that Harry experiences personally.

Because of the prevalence of death and loss at this time, Harry and his friends experience the process of coming of age not as a gradual development of independence but as an abrupt and unwelcome lurch into a world in which they are extremely vulnerable and must learn to protect themselves. At this time, the trio should be looking forward to the possibilities of adult life, and indeed at the beginning of the novel they’re excited to receive their O.W.L. results and think about the careers they might pursue; however, as the novel progresses they shift to contemplating the prospect that they too might become casualties in the fight against Voldemort. As Hermione reads the Daily Prophet each morning, Ron asks her “in a determinedly casual voice” if “anyone we know [is] dead”; for him, growing up means learning to feign toughness about the increasing danger in which he lives. Dumbledore himself comments that Sirius’s death is “a brutal ending to what should have been a long and happy relationship,” articulating the sense of sudden vulnerability that Harry feels in the wake of this loss.

At the end of the novel, as Harry decides to leave Hogwarts to seek out Voldemort’s Horcruxes, his new adult responsibility comes with the feeling of being completely unprotected. At Dumbledore’s funeral he thinks that “all the people who cared about him had stood in front of him one by one” and are now dead; he chastises himself for ever having believed “that the shelter of a parent’s arms meant nothing could hurt him.” Even though Ron and Hermione insist on accompanying him on his quest, he ends the novel imagining the “dark and twisted path…stretching ahead for himself.” For Harry, coming of age doesn’t just entail learning to care for himself but radical disillusionment with the idea that anyone else could take care of him.

In its relatively grim portrayal of the process of growing up, Half-Blood Prince diverges from the previous Harry Potter books, in which the trio takes on increasing responsibility but is always bolstered by protective adults. By chronicling Harry’s changing attitudes towards the adults who have always cared for him, the novel argues that coming of age is as much a matter of loss as it is of growth. 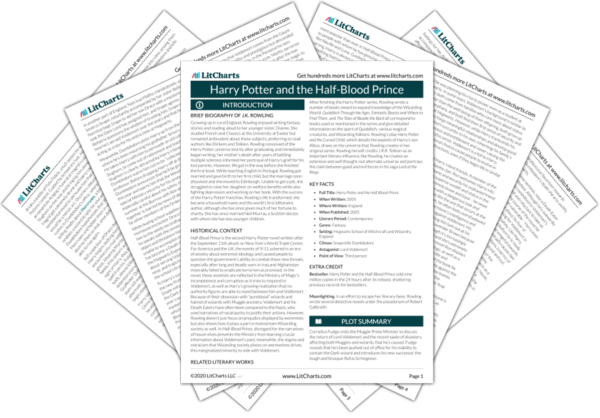 Below you will find the important quotes in Harry Potter and the Half-Blood Prince related to the theme of Coming of Age.
Chapter Four: Horace Slughorn Quotes

Moreover, it had seemed the right destiny for him since he had heard the prophecy a few weeks ago…Neither can live while the other survives…Wouldn’t he be living up to the prophecy, and giving himself the best chance of survival, if he joined those highly trained wizards whose job it was to find and kill Voldemort?

It would have been a happy, peaceful holiday had it not been for the stories of disappearances, odd accidents, even of deaths now appearing almost daily in the Prophet…To Mrs. Weasley’s displeasure, Harry’s sixteenth birthday celebrations were marred by grisly tidings brought to the party by Remus Lupin, who was looking gaunt and grim, his brown hair streaked liberally with gray, his clothes more ragged and patched than ever.

“Anyone we know dead?” asked Ron in a determinedly casual voice; he posed the same question every time Hermione opened her paper.

But unbidden into his mind came an image of that same deserted corridor with himself kissing Ginny instead…the monster in his chest purred…but then he saw Ron ripping open the tapestry curtain and drawing his wand on Harry, shouting things like “betrayal of trust”… “supposed to be my friend”…

Unlock with LitCharts A+
Chapter Seventeen: A Sluggish Memory Quotes

“He accused me of being ‘Dumbledore’s man through and through.’”

…To Harry’s intense embarrassment, he suddenly realized that Dumbledore’s bright blue eyes looked rather watery, and stared hastily at his own knees.

It was, he thought, the difference between being dragged into the arena to face a battle to the death and walking into the arena with your head held high. Some people, perhaps, would say that there was little to choose between the two ways, but Dumbledore knew – and so do I, thought Harry, with a rush of fierce pride, and so did my parents – that there was all the difference in the world.

Unlock with LitCharts A+
Chapter Twenty-Six: The Cave Quotes

“I am not worried, Harry,” said Dumbledore, his voice a little stronger despite the freezing water. “I am with you.”

…People who cared about him had stood in front of him one by one, his mother, his father, his godfather, and finally Dumbledore, all determined to protect him; but now that was over. He could not let anybody else stand between him and Voldemort; he must abandon forever the illusion he ought to have lost at the age of one, that the shelter of a parent’s arms meant that nothing could hurt him. There was no waking from this nightmare, no comforting whisper in the dark that he was safe really…the last and greatest of his protectors had died, and he was more alone than he had ever been before.

…In spite of everything, in spite of the dark and twisting path he saw stretching ahead for himself, in spite of the final meeting with Voldemort he knew must come, whether in a month, in a year, or in ten, he felt his heart lift at the thought that there was still one last golden day of peace left to enjoy with Ron and Hermione. 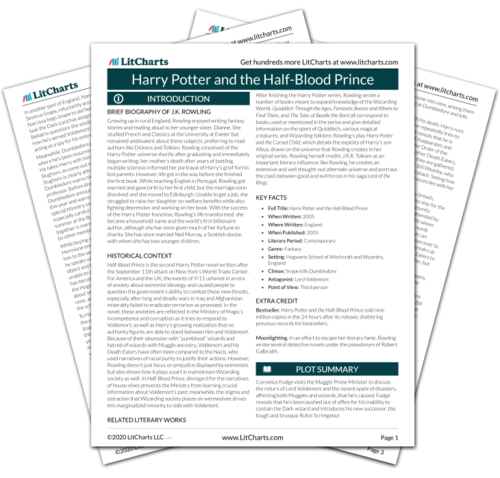 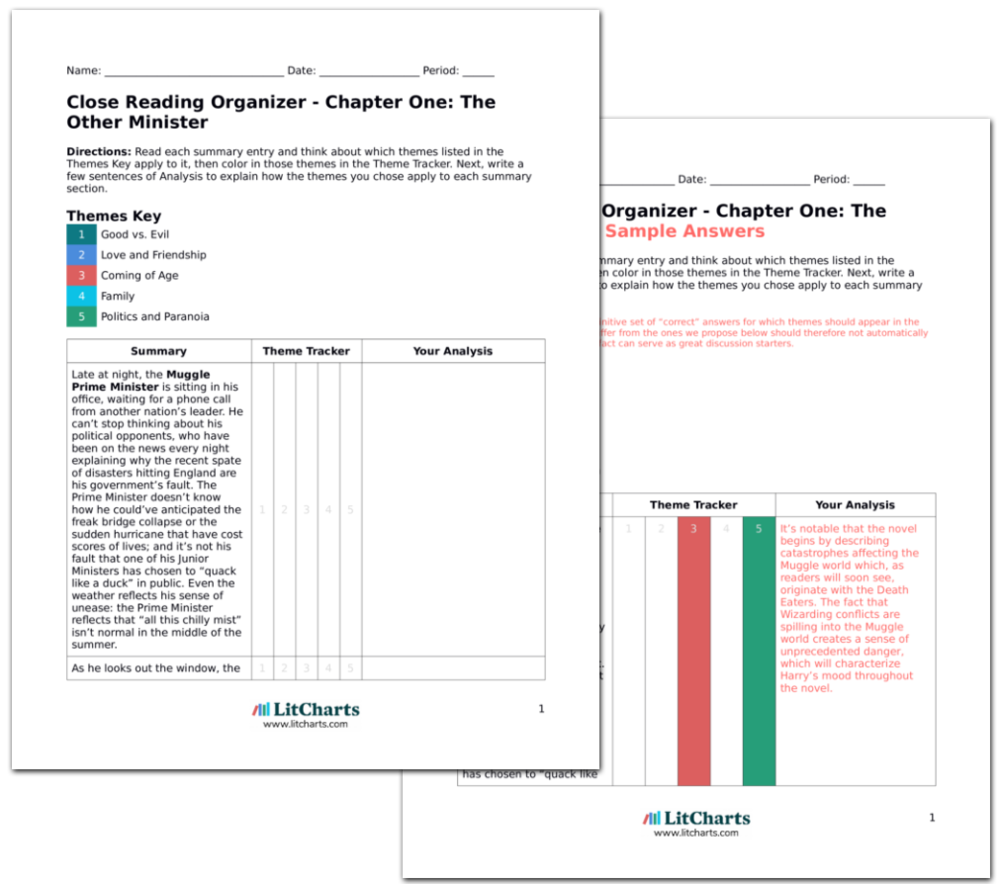