Download this LitChart! (PDF)
Teachers and parents! Struggling with distance learning? Our Teacher Edition on Her First Ball can help.

Welcome to the LitCharts study guide on Katherine Mansfield's Her First Ball. Created by the original team behind SparkNotes, LitCharts are the world's best literature guides.

A concise biography of Katherine Mansfield plus historical and literary context for Her First Ball.

A quick-reference summary: Her First Ball on a single page.

In-depth summary and analysis of every of Her First Ball. Visual theme-tracking, too.

Explanations, analysis, and visualizations of Her First Ball's themes.

Her First Ball's important quotes, sortable by theme, character, or .

Description, analysis, and timelines for Her First Ball's characters.

Explanations of Her First Ball's symbols, and tracking of where they appear.

An interactive data visualization of Her First Ball's plot and themes.

Katherine Mansfield Murry grew up in Wellington, New Zealand as part of a distinguished family. When Mansfield was 19, she moved to England, where she attended Queen’s College. After graduating, she temporarily returned to New Zealand and began to publish short stories under the pen name “K. Mansfield,” but eventually she moved back to London, where she lived for most of her adult life. In a German Pension, Mansfield’s first collection of short stories, was published in 1911; the stories satirize German sensibilities, and Mansfield would later renounce them, refusing a reprint. After the military death of her brother Leslie in 1915, Mansfield’s work began to focus on her childhood memories of New Zealand. Her best-known collections emerged during this period, including The Garden Party, and Other Stories in 1922, and her novel The Aloe, published posthumously in 1930. While she lived in England, Mansfield was connected to Bloomsbury writers such as E.M. Forster and Virginia Woolf, had affairs with both men and women, and married editor John Middleton Murry in 1918. She died of tuberculosis in 1923 while she was living in France seeking treatment for the disease.
Get the entire Her First Ball LitChart as a printable PDF.
"My students can't get enough of your charts and their results have gone through the roof." -Graham S.
Download 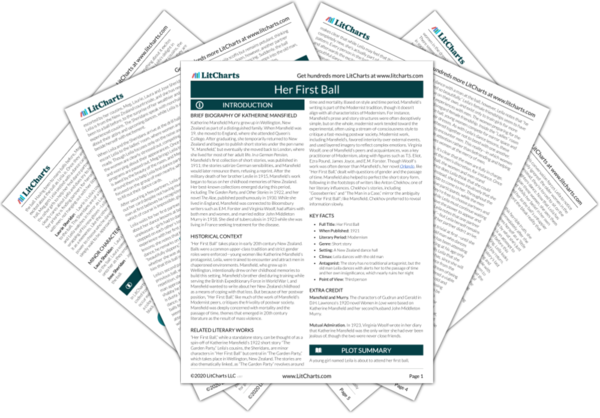 Historical Context of Her First Ball

“Her First Ball” takes place in early 20th century New Zealand. Balls were a common upper-class tradition and strict gender roles were enforced—young women like Katherine Mansfield’s protagonist, Leila, were trained to encounter and attract men in chaperoned environments. Mansfield, who grew up in Wellington, intentionally drew on her childhood memories to build this setting. Mansfield’s brother died during training while serving the British Expeditionary Force in World War I, and Mansfield wanted to write about her New Zealand childhood as a means of coping with that loss. But because of her postwar position, “Her First Ball,” like much of the work of Mansfield’s Modernist peers, critiques the frivolity of postwar society. Mansfield was deeply concerned with mortality and the passage of time, themes that emerged in 20th century literature as the result of mass violence.

Other Books Related to Her First Ball

“Her First Ball,” while a standalone story, can be thought of as a spin-off of Katherine Mansfield’s 1922 short story “The Garden Party.” Leila’s cousins, the Sheridans, are minor characters in “Her First Ball” but central in “The Garden Party,” which takes place in Wellington, New Zealand. The stories are also thematically linked, as “The Garden Party” revolves around time and mortality. Based on style and time period, Mansfield’s writing is part of the Modernist tradition, though it doesn’t align with all characteristics of Modernism. For instance, Mansfield’s prose and story structures were often deceptively simple, but on the whole, modernist work tended toward the experimental, often using a stream-of-consciousness style to critique a fast-moving postwar society. Modernist work, including Mansfield’s, favored interiority over external events, and used layered imagery to reflect complex emotions. Virginia Woolf, one of Mansfield’s peers and acquaintances, was a key practitioner of Modernism, along with figures such as T.S. Eliot, Ezra Pound, James Joyce, and E.M. Forster. Though Woolf’s work was often denser than Mansfield’s, her novel Orlando, like “Her First Ball,” dealt with questions of gender and the passage of time. Mansfield also helped to perfect the short story form, following in the footsteps of writers like Anton Chekhov, one of her literary influences. Chekhov’s stories, including “Gooseberries” and “The Man in a Case,” mirror the ambiguity of “Her First Ball”; like Mansfield, Chekhov preferred to reveal information slowly.
Key Facts about Her First Ball

Extra Credit for Her First Ball

Mansfield and Murry. The characters of Gudrun and Gerald in D.H. Lawrence’s 1920 novel Women in Love were based on Katherine Mansfield and her second husband John Middleton Murry.

Mutual Admiration. In 1923, Virginia Woolf wrote in her diary that Katherine Mansfield was the only writer she had ever been jealous of, though the two were never close friends. 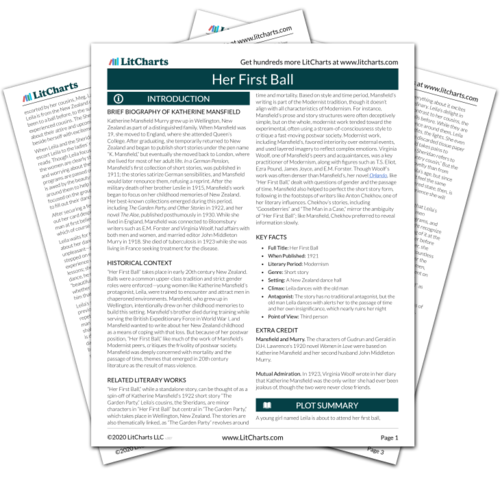 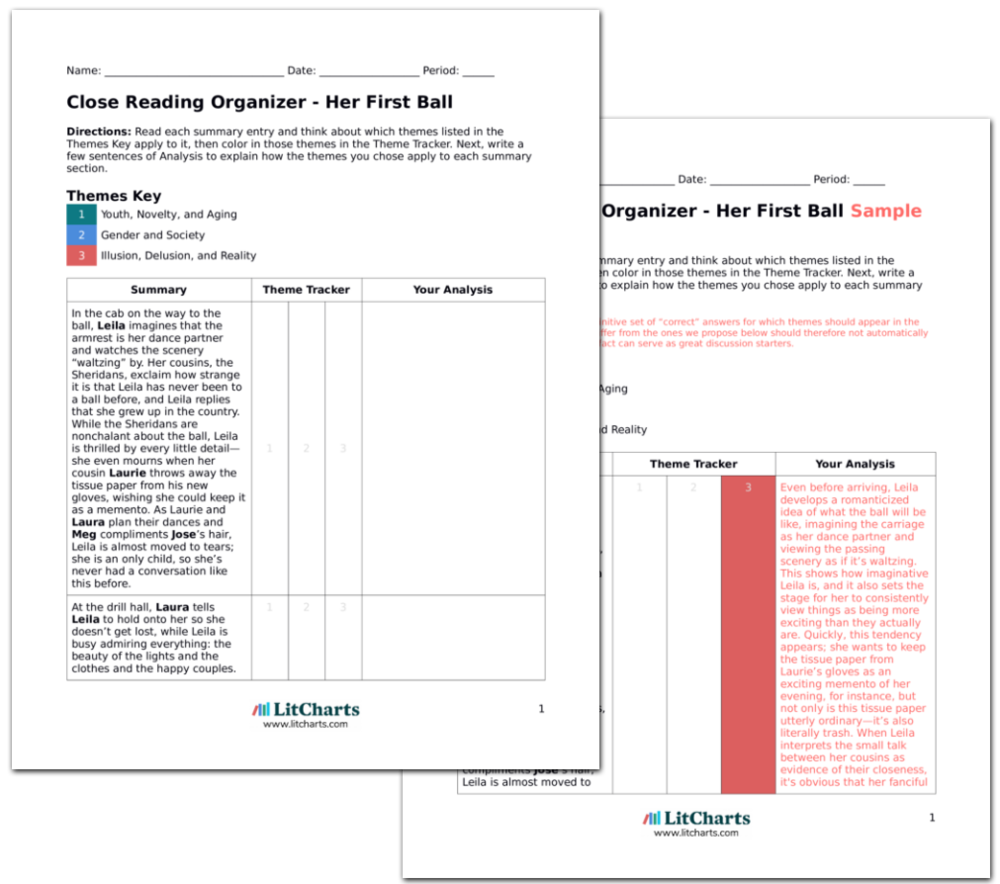