Emerson argues that all things—God, humanity, and nature—are inherently connected, and that history serves as a record of this divine unity. He begins the essay with the claim that a “universal mind” unites the individual with all other people and that the experiences, ideas, and feelings of one person reflect the “universal nature” of human beings. While historical texts tend to set apart certain events or figures as distinct from the rest of humanity, Emerson believes that notable differences between peoples are merely the result of external circumstances acting on the same intrinsic spark of divinity that exists in everyone.

Since this universal mind is the author of history, argues Emerson, it must also be its reader. All experiences are universal, so history is biographical for each individual. Drawing on the transcendentalist philosophy of oneness, Emerson claims that the “universal nature” of the spirit unites everyone and everything across time. All of history, therefore, happened “for us” in the present, and the individual can understand past events through the parallel events of their own life. Emerson values the spiritual intuition of human beings over objective facts (another transcendentalist principle) and believes that laws are a based upon humanity’s collective aspiration toward an “unattained but attainable self” of morality and intellectuality.

Emerson further outlines this inherent connection of all things, suggesting that the individual can see aspects of themselves in other people, artifacts, and events of the past. He argues that humanity’s everyday connection to nature is their most tangible link to the past, as a spiritual oneness with the natural world has pervaded all individuals over time. Nature repeats the same divine patterns in all living things, and human beings seek to immortalize nature’s beauty in their art and architecture. Emerson believes that art and nature unite people across time by conjuring the same images and emotional connotations for all individuals. And just as an artist must “become” their subject to effectively portray it, human beings must see the essence of themselves in history (and vice versa) to understand the past.

Emerson also addresses literature as a means of personalizing and making sense of the past. Characters are the written extensions of human beings, often serving as allegorical archetypes for universal human principles such as pain, truth, or justice. Emerson argues that the lessons of the “eternal figures” embodied in literature convey the true essence of life and should therefore be valued over detached empirical facts. By studying literature, the individual can come to realize how the universal mind has been developed and preserved throughout the ages.

Ultimately, Emerson believes that the personal development and experiences of the individual reflect the same historical patterns at different levels of resolution. A person’s private life is a single iteration of the united spirit and consciousness of all things. Emerson points out that the history of all things is synergistic, as mankind could not have achieved any of its greatest feats without his connection to the rest of the natural world. He concludes the essay with a call to action, imploring the individual read and write history from a “broader and deeper” perspective in order to contextualize their life’s meaning within the spiritual unity that links everyone and everything over time. 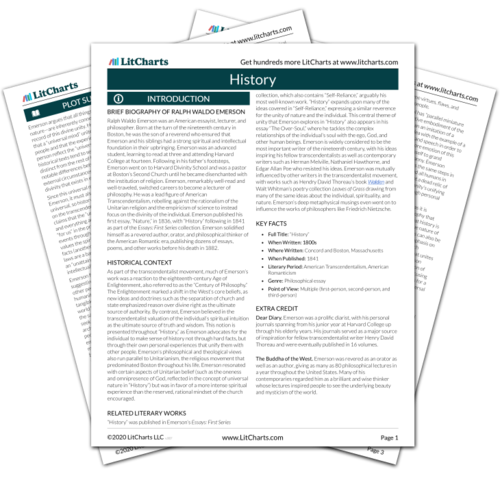 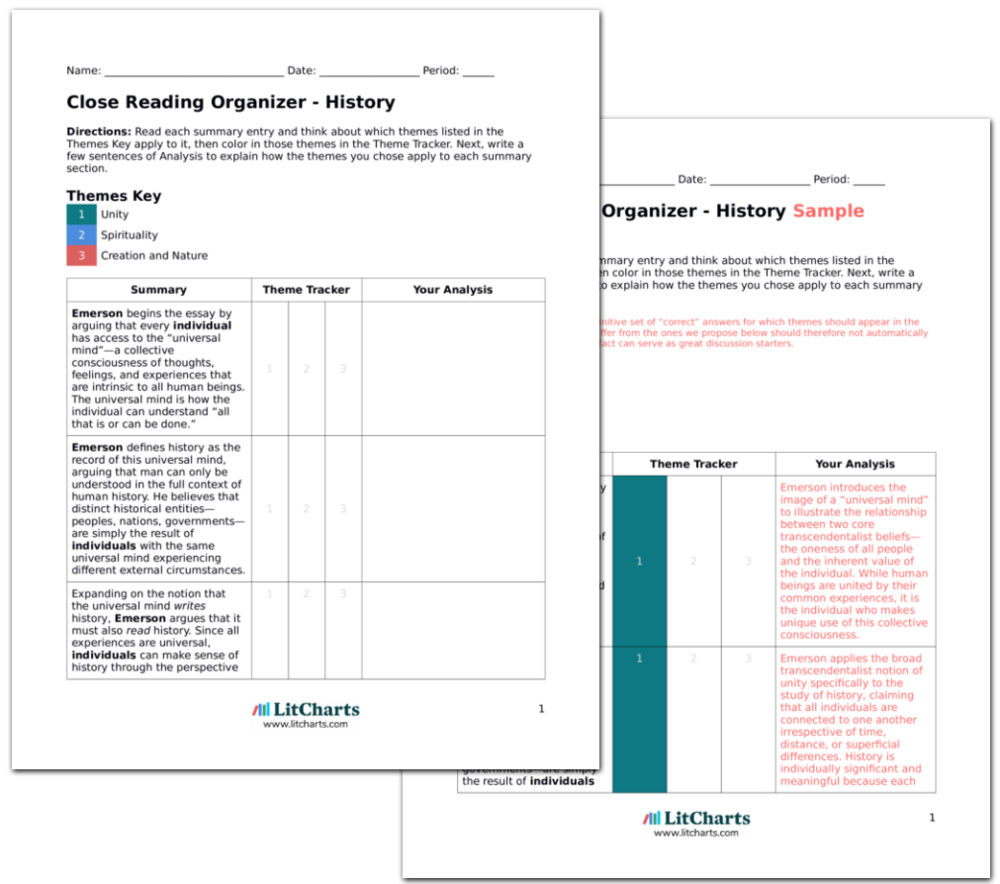