Download this LitChart! (PDF)
Teachers and parents! Struggling with distance learning? Our Teacher Edition on Hope Leslie can help.

Welcome to the LitCharts study guide on Catharine Sedgwick's Hope Leslie. Created by the original team behind SparkNotes, LitCharts are the world's best literature guides.

A concise biography of Catharine Sedgwick plus historical and literary context for Hope Leslie.

A quick-reference summary: Hope Leslie on a single page.

In-depth summary and analysis of every chapter of Hope Leslie. Visual theme-tracking, too.

Explanations of Hope Leslie's symbols, and tracking of where they appear.

An interactive data visualization of Hope Leslie's plot and themes.

Catharine Maria Sedgwick was born to Theodore and Pamela Dwight Sedgwick, the sixth of their ten children. Theodore Sedgwick served as Speaker of the U.S. House of Representatives and as a Massachusetts senator. As a lawyer, he also fought to abolish slavery in his home state, a fact in which Catharine took great pride. Elizabeth Freeman, a former slave whose freedom Theodore secured and who was subsequently employed by the family, helped raise Catharine and had a noted influence on her. Catharine was close to her many siblings, two of whom, Harry and Theodore, were especially encouraging of Catharine’s writing, helping her publish and promote it. While still a young woman, Sedgwick became a prominent figure on America’s early literary scene. Having converted from Calvinism to Unitarianism, she published a pamphlet promoting religious tolerance, and she began making a living by publishing short stories, some of them specifically for young people. Among her novels, Hope Leslie gained an international readership and has had the most enduring popularity. Many of her novels included themes of patriotism, understanding between people of different cultures and religions, and women transcending the social roles expected of them. Though Catherine received several proposals throughout her life, she remained unmarried, and she divided her time between New York City and the Massachusetts Berkshires.
Get the entire Hope Leslie LitChart as a printable PDF.
"My students can't get enough of your charts and their results have gone through the roof." -Graham S.
Download 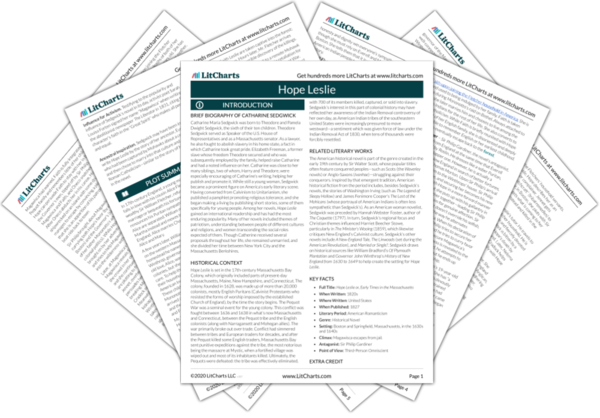 Hope Leslie is set in the 17th-century Massachusetts Bay Colony, which originally included parts of present-day Massachusetts, Maine, New Hampshire, and Connecticut. The colony, founded in 1628, was made up of more than 20,000 colonists, mostly English Puritans (Calvinist Protestants who resisted the forms of worship imposed by the established Church of England), by the time the story begins. The Pequot War was a seminal event for the young colony. This conflict was fought between 1636 and 1638 in what’s now Massachusetts and Connecticut, between the Pequot tribe and the English colonists (along with Narragansett and Mohegan allies). The war primarily broke out over trade. Conflict had simmered between tribes and European traders for decades, and after the Pequot killed some English traders, Massachusetts Bay sent punitive expeditions against the tribe, the most notorious being the massacre at Mystic, when a fortified village was wiped out and most of its inhabitants killed. Ultimately, the Pequots were defeated: the tribe was effectively eliminated, with 700 of its members killed, captured, or sold into slavery. Sedgwick’s interest in this part of colonial history may have reflected her awareness of the Indian Removal controversy of her own day, as American Indian tribes of the southeastern United States were increasingly pressured to move westward—a sentiment which was given force of law under the Indian Removal Act of 1830, when tens of thousands were forcibly resettled.

Other Books Related to Hope Leslie

The American historical novel is part of the genre created in the early 19th century by Sir Walter Scott, whose popular titles often feature conquered peoples—such as Scots (the Waverley novels) or Anglo-Saxons (Ivanhoe)—struggling against their conquerors. Inspired by that emergent tradition, American historical fiction from the period includes, besides Sedgwick’s novels, the stories of Washington Irving (such as The Legend of Sleepy Hollow) and James Fenimore Cooper’s The Last of the Mohicans (whose portrayal of American Indians is often less sympathetic than Sedgwick’s). As an American woman novelist, Sedgwick was preceded by Hannah Webster Foster, author of The Coquette (1797). In turn, Sedgwick’s regional focus and Christian themes influenced Harriet Beecher Stowe, particularly in The Minister’s Wooing (1859), which likewise critiques New England’s Calvinist culture. Sedgwick’s other novels include A New-England Tale, The Linwoods (set during the American Revolution), and Married or Single?. Sedgwick draws on historical sources like William Bradford’s Of Plymouth Plantation and Governor John Winthrop’s History of New England from 1630 to 1649 to help create the setting for Hope Leslie.
Key Facts about Hope Leslie

Influence for Activism. Testifying to the popularity and influence of Sedgwick’s novel in its day, activist poet Sarah Louisa Forten signed her name “Magawisca” when writing in the abolitionist newspaper The Liberator in 1831, citing that character’s faith in the “Great Spirit” who makes all people free and equal.

Ancestral Inspiration. Sedgwick may have been inspired to write Hope Leslie by the story of her ancestor, Eunice Williams, who had been captured by Mohawks about a century earlier and then chose to marry into that culture and convert to Roman Catholicism—similar to the story of Hope’s sister, Faith, in the novel. 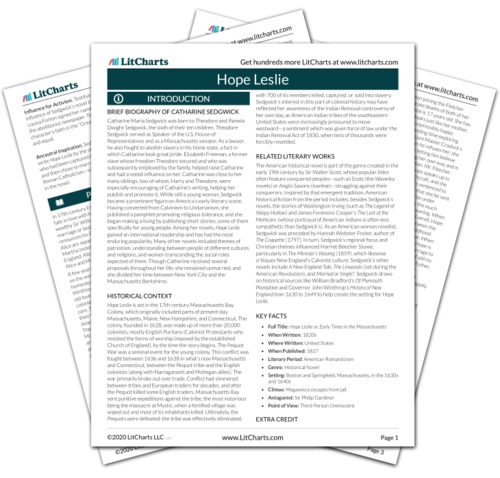 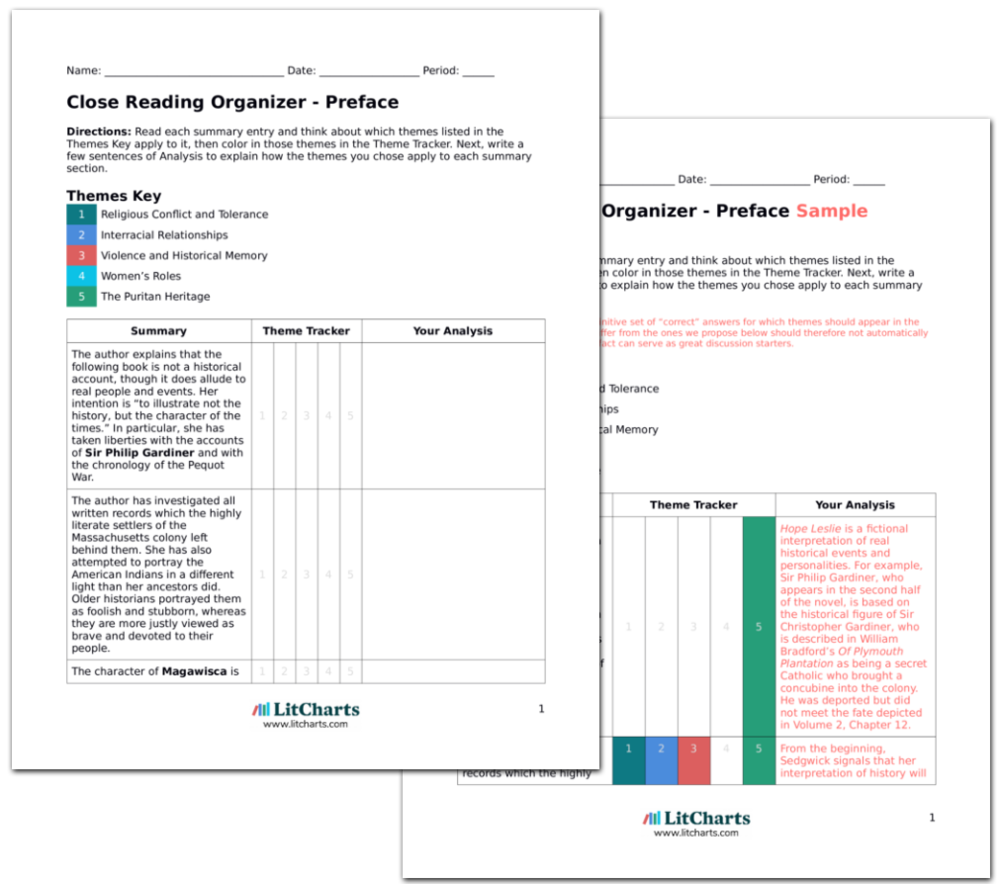