Download this LitChart! (PDF)
Teachers and parents! Struggling with distance learning? Our Teacher Edition on Housekeeping can help.

Welcome to the LitCharts study guide on Marilynne Robinson's Housekeeping. Created by the original team behind SparkNotes, LitCharts are the world's best literature guides.

A concise biography of Marilynne Robinson plus historical and literary context for Housekeeping.

A quick-reference summary: Housekeeping on a single page.

In-depth summary and analysis of every chapter of Housekeeping. Visual theme-tracking, too.

Explanations of Housekeeping's symbols, and tracking of where they appear.

An interactive data visualization of Housekeeping's plot and themes.

Marilynne Robinson was born Marilynne Summers in Sandpoint, Idaho in 1943. She was close with her brother, who also grew up to become a writer and an art historian. After studying American Literature at Pembroke College (the former women’s college at Brown University), she went on to earn a doctorate in English from the University of Washington, where she wrote her dissertation on Shakespeare’s Henry VI, Part 2. She penned Housekeeping in the late 1970s, and though she expected it to receive little attention, it became an object of national acclaim and the winner of the prestigious PEN/Hemingway Award for best first novel. After the publication of Housekeeping, Robinson turned to nonfiction and completed several books of critical work—she would not release her next novel, Gilead, for over twenty years. In 2005, Gilead won the Pulitzer Prize for Fiction, and Robinson wrote two follow-up novels, which follow the characters from Gilead over the course of the next ten years. She received a 2012 National Humanities Medal from President Barack Obama, and currently lives in Iowa City, where she is Professor Emeritus and a former faculty member at the distinguished Iowa Writers’ Workshop. She lectures regularly around the country, and is rumored to be at work on a fourth installment in the Gilead saga.
Get the entire Housekeeping LitChart as a printable PDF.
"My students can't get enough of your charts and their results have gone through the roof." -Graham S.
Download 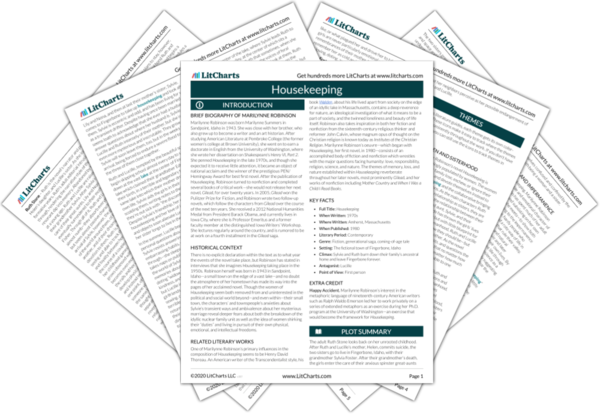 There is no explicit declaration within the text as to what year the events of the novel take place, but Robinson has stated in interviews that she imagines Housekeeping taking place in the 1950s. Robinson herself was born in 1943 in Sandpoint, Idaho—a small town on the edge of a vast lake—and no doubt the atmosphere of her hometown has made its way into the pages of her acclaimed novel. Though the women of Housekeeping seem both removed from and uninterested in the political and social world beyond—and even within—their small town, the characters’ and townspeople’s anxieties about Sylvie’s transient ways and ambivalence about her mysterious marriage reveal deeper fears about both the breakdown of the idyllic nuclear family unit as well as the idea of women shirking their “duties” and living in pursuit of their own physical, emotional, and intellectual freedoms.

Other Books Related to Housekeeping

One of Marilynne Robinson’s primary influences in the composition of Housekeeping seems to be Henry David Thoreau. An American writer of the Transcendentalist style, his book Walden, about his life lived apart from society on the edge of an idyllic lake in Massachusetts, contains a deep reverence for nature, an ideological investigation of what it means to be a part of society, and the twinned loneliness and beauty of life itself. Robinson also takes inspiration in both her fiction and nonfiction from the sixteenth-century religious thinker and reformer John Calvin, whose magnum opus of thought on the Christian religion is known today as Institutes of the Christian Religion. Marilynne Robinson’s oeuvre—which began with Housekeeping, her first novel, in 1980—consists of an accomplished body of fiction and nonfiction which wrestles with the major questions facing humanity: love, responsibility, religion, science, and nature. The themes of memory, loss, and nature established within Housekeeping reverberate throughout her later novels, most prominently Gilead, and her works of nonfiction including Mother Country and When I Was a Child I Read Books.
Key Facts about Housekeeping

Happy Accident. Marilynne Robinson’s interest in the metaphoric language of nineteenth-century American writers such as Ralph Waldo Emerson led her to work privately on a series of extended metaphors as an exercise during her Ph.D. program at the University of Washington—an exercise that would become the framework for Housekeeping. 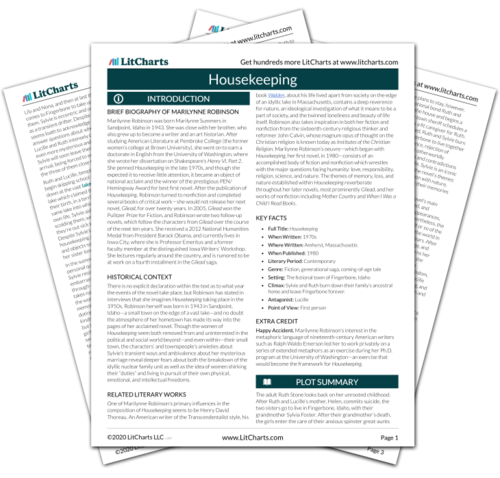 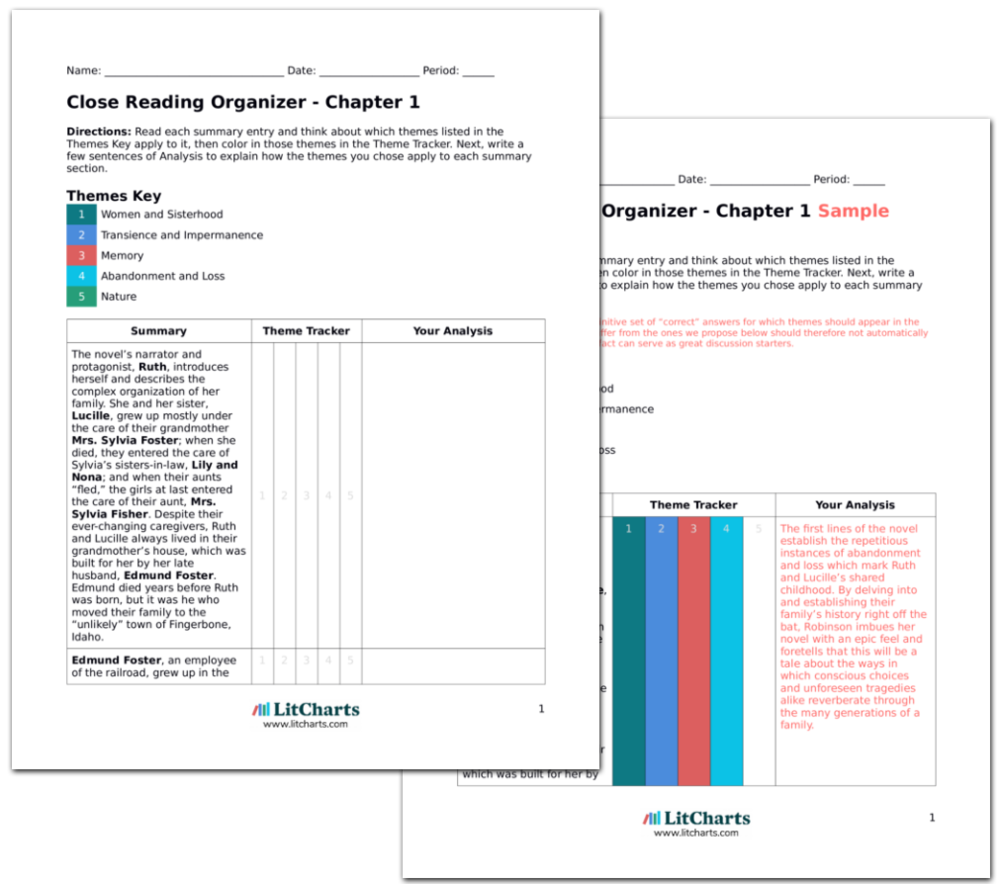