Get LitCharts A+
LitCharts assigns a color and icon to each theme in How to Read Literature Like a Professor, which you can use to track the themes throughout the work.

Foster argues that intertextuality creates richness through the harmonious mix of “strangeness and familiarity” within a piece of literature. Surface-level reading that does not consider other texts as being part of a given literary work tends to leave that work looking rather thin or opaque. Paying attention to intertextuality, however, illuminates many further layers of meaning within a given literary work, and can clarify part of the text that would otherwise be obscure or confusing.

Furthermore, looking out for intertextual references is useful even in contexts in which the reader might not actually be able to correctly identify the text being referenced. As Foster writes, “But we haven’t read everything. Neither have I. Nor has anyone.” It would be impossible to expect anyone—particularly a “beginning reader”—to correctly identify all the intertextual elements in a given literary work. However, paying attention to intertextuality is important because it builds confidence and encourages readers to view texts in a comparative way, which is vital in examining the significance of literature in society. 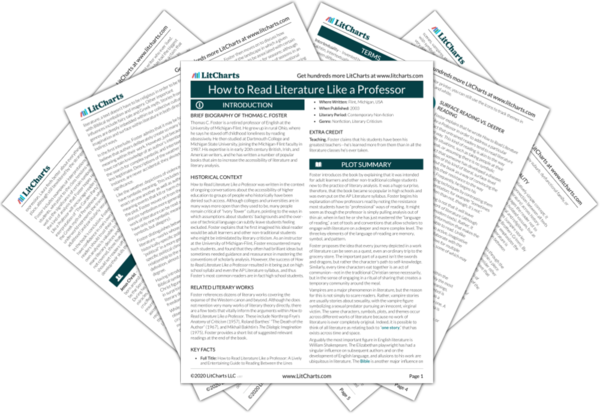 Intertextuality Quotes in How to Read Literature Like a Professor

Below you will find the important quotes in How to Read Literature Like a Professor related to the theme of Intertextuality.
Introduction Quotes

The professor, as the slightly more experienced reader, has acquired over the years the use of a certain "language of reading," something to which the students are only beginning to be introduced. What I'm talking about is a grammar of literature, a set of conventions and patterns, codes and rules, that we learn to employ in dealing with a piece of writing.

Memory. Symbol. Pattern. These are the three items that, more than any other, separate the professorial reader from the rest of the crowd.

Unlock with LitCharts A+
Chapter 1 Quotes

"Always" and "never" are not words that have much meaning in literary study. For one thing, as soon as something seems to always be true, some wise guy will come along and write something to prove that it's not.

There is only one story. Ever. One. It's always been going on and it's everywhere around us and every story you've ever read or heard or watched is part of it.

The devil, as the old saying goes, can quote Scripture. So can writers. Even those who aren't religious or don't live within the Judeo-Christian tradition may work something in from Job or Matthew or the Psalms.

What we mean in speaking of "myth" in general is story, the ability of story to explain ourselves to ourselves... That explanation takes the shape of stories that are deeply ingrained in our group memory, that shape our culture and are in turn shaped by it, that constitute a way of seeing by which we read the world and, ultimately, ourselves.

Unlock with LitCharts A+
Interlude: One Story Quotes

Don't bother looking for the originals, though. You can't find the archetype, just as you can't find the pure myths. What we have, even in our earliest recorded literature, are variants, embellishments, versions, what Frye called "displacement" of the myth.

We—as readers or writers, tellers or listeners—understand each other, we share knowledge of the structures of our myths, we comprehend the logic of symbols, largely because we have access to the same swirl of story.

By "reading" here, I am taking a liberal view. You read novels and poems, of course. But you also "read" a play even if you see it in its proper setting, a theater, and not between the covers of a book. Well, then, do you also "read" a movie? I believe so, although some films may reward reading more than others.

Unlock with LitCharts A+
Postlude Quotes

A reader’s only obligation, it seems to me, is to the text. We can’t interrogate the writer as to intentions, so the only basis of authority must reside in the text itself.