Get LitCharts A+
LitCharts assigns a color and icon to each theme in Howards End, which you can use to track the themes throughout the work.

The Edwardian era (approximately 1901–1910) during which Forster wrote Howards End is widely considered to be the last period of English global supremacy, before the country would be devastated by two world wars and would reluctantly relinquish her authority over her vast overseas colonies. Forster subtly critiques the subjugation of foreign territories and populations that granted England her supposed preeminence, describing the temptation of and justification for imperialism as well as illustrating its inherent flaws.

Margaret, Helen, and Tibby’s father forcefully denounces the zeal for imperialism and colonialism that afflicts the European powers of the day, from his native Germany to his adopted England. “It is the vice of a vulgar mind to be thrilled by bigness, to think that a thousand square miles are a thousand times more wonderful than one square mile, and that a million square miles are almost the same as heaven,” he declares to them as children. Instead of continuing the mad rush to conquer distant territories, he suggests, Germany and England should seek to rekindle the intellectual mastery that once enlightened the world.

The Wilcoxes’ staunchly colonialist ideology could not be more dissimilar. Henry and his sons run the Imperial and West African Rubber Company, an enterprise that Margaret finds impressive despite her father’s beliefs. She greatly admires Paul Wilcox for traveling all the way to Nigeria to work for the sake of the British colony there. She voices her admiration to Tibby: “He doesn’t want the money, it is work he wants, though it is beastly work—dull country, dishonest natives, an eternal fidget over fresh water and food [...] A nation that can produce men of that sort may well be proud. No wonder England has become an Empire.”

Margaret has evidently not embraced her father’s convictions to the letter, and lines like this from the heroine of Howards End may startle readers who assume that Forster is voicing his own opinion through his protagonist. However, looking at the book’s overall treatment of imperialism—and of Margaret—makes it clear that Forster characterizes British colonialism as fundamentally unethical and untenable, and Margaret is actually an example of the flawed prevailing mindset that struggles to renounce the belief that British superiority entitles England to hold other people in subjection. Forster writes later, “Imperialism always had been one of [Margaret’s] difficulties.” Her characterization of the colonies as “beastly,” “dull,” and “dishonest” exposes her extremely narrow, racially-prejudiced conception of Africa.

Forster criticizes this racism and objectification on the part of the British towards native populations that justify the profitable system of colonial exploitation. He describes a map hanging on the wall in Henry’s company office “on which the whole continent appeared, looking like a whale marked out for a blubber.” Evoking the bloody slaughter of whales and the foul labor of harvesting their blubber suggests that the work of the British in their African colonies is similarly monstrous. Likening the continent to a dead whale also suggests how the British coldly view Africa and its people as merely another commodity to be mined.

Forster further illustrates how the Wilcoxes and their like conduct their predatory and exploitative colonialism largely outside of the public eye, the better to prevent objections from an informed domestic populace. As Margaret notes, “Henry had implied his business rather than described it, and the formlessness and vagueness that one associates with Africa itself had hitherto brooded over the main sources of his wealth.” While the means by which Henry extracts his enormous fortune from Africa are never spelled out in great detail, he apparently specializes in the trade of rubber, a substance which was known to be harvested by coerced African laborers under extremely brutal conditions. Cultivating an aura of “formlessness and vagueness” rather than acknowledging the cruel conditions under which he reaps his riches allows him to operate free from scrutiny. At the same time, Margaret’s apparent disinterest in piercing the fog surrounding his operations, an indifference that is highly uncharacteristic of a woman so intelligent, perceptive, and reflective, is an indication that she indeed suspects the dark truth but does not want to hear it confirmed. She is unwilling to consider the idea that England’s glory rests upon suffering.

The last word that Forster offers on imperialism prefaces Charles’s fatal assault on Leonard. As the latter walks from the train to Howards End, Charles passes him on the road, driving the short distance to the house from his home nearby. Forster writes, “In [the vehicle] was another type, whom Nature favours—the Imperial. Healthy, ever in motion, it hopes to inherit the earth. It breeds as quickly as the yeoman, and as soundly; strong is the temptation to acclaim it as a super-yeoman, who carries his country’s virtue overseas. But the Imperialist is not what he thinks or seems. He is a destroyer.” Forster unfavorably contrasts “the Imperialist”—Charles—with “the yeoman,” or the self-sufficient farmer Leonard could have possibly become if he had been born in the country instead of the city. Forster idealizes the yeomen of England’s pre-industrial past, those who were firmly connected to the natural world and were content to simply provide for their families. He envisions the original occupants of Howards End to be this type of humble landowner, and he wishes for England to remember this modest spirit and renounce her destructive imperial ambitions. The nation’s colonies enrich a handful of people like the Wilcoxes, at too great a cost to the soul of all who support British imperialism. 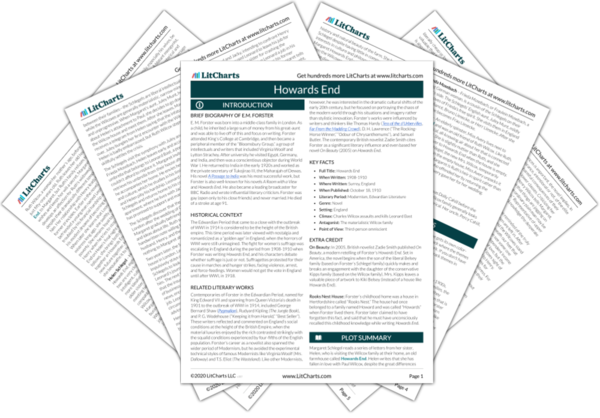 Below you will find the important quotes in Howards End related to the theme of Colonialism and Imperialism.
Chapter 4 Quotes

[Leonard] understood his own corner of the machine, but nothing beyond it…To him, as to the British public, the Porphyrion was the Porphyrion of the advertisement—a giant, in the classical style, but draped sufficiently, who held in one hand a burning torch, and pointed with the other to St. Paul’s and Windsor Castle. A large sum of money was inscribed below, and you drew your own conclusions…A giant was of an impulsive morality—one knew that much. He would pay for Mrs. Munt’s hearthrug with ostentatious haste, a large claim he would repudiate quietly, and fight court by court. But his true fighting weight, his antecedents, his amours with other members of the commercial Pantheon—all these were as uncertain to ordinary mortals as were the escapades of Zeus.

It was the first [Margaret] had heard of the mews behind Ducie Street. When she was a possible tenant it had suppressed itself, not consciously, but automatically. The breezy Wilcox manner, though genuine, lacked the clearness of vision that is imperative for truth. When Henry lived in Ducie Street he remembered the mews; when he tried to let he forgot it; and if any one had remarked that the mews must be either there or not, he would have felt annoyed, and afterwards have found some opportunity of stigmatising the speaker as academic. So does my grocer stigmatise me when I complain of the quality of his sultanas, and he answers in one breath that they are the best sultanas, and how can I expect the best sultanas at that price? It is a flaw inherent in the business mind, and Margaret may do well to be tender to it, considering all that the business mind has done for England.

[Margaret] was glad to go there, for Henry had implied his business rather than described it, and the formlessness and vagueness that one associates with Africa itself had hitherto brooded over the main sources of his wealth. Not that a visit to the office cleared things up…even when she penetrated to the inner depths, she found only the ordinary table and Turkey carpet, and though the map over the fireplace did depict a helping of West Africa, it was a very ordinary map. Another map hung opposite, on which the whole continent appeared, looking like a whale marked out for blubber.

Here men had been up since dawn. Their hours were ruled, not by a London office, but by the movements of the crops and the sun…They are England’s hope…

At the chalk pit a motor passed [Leonard]. In it was another type, whom Nature favours—the Imperial. Healthy, ever in motion, it hopes to inherit the earth. It breeds as quickly as the yeoman, and as soundly; strong is the temptation to acclaim it as a super-yeoman, who carries his country’s virtue overseas. But the Imperialist is not what he thinks or seems. He is a destroyer. 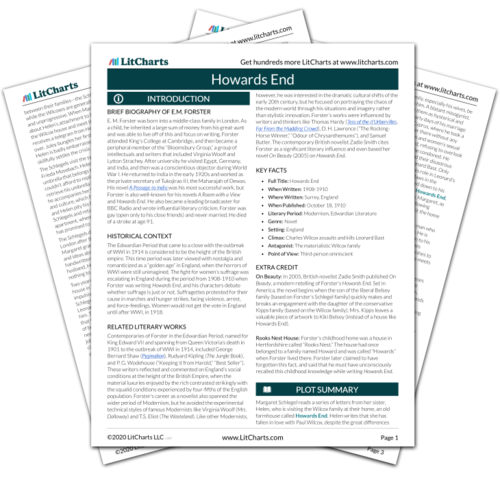 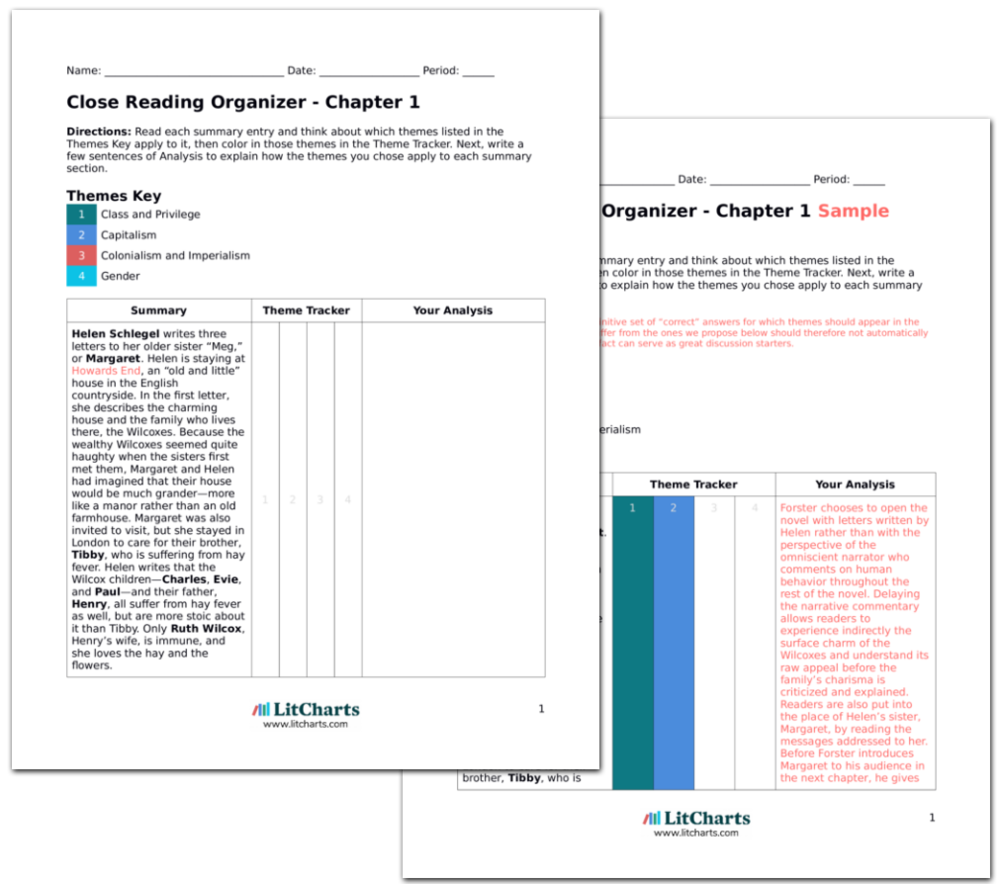