Download this LitChart! (PDF)
Teachers and parents! Struggling with distance learning? Our Teacher Edition on I Am Not Your Perfect Mexican Daughter can help.

The large, gaudy, and rather sad quinceañera party Julia’s Amá and Apá throw for her is a symbol of their desire to transform Julia into the “perfect Mexican daughter” they believe her deceased older sister Olga always was. Shortly after Olga’s death, when Amá announces that she plans to use her savings to throw Julia the traditional party (which takes place on or around Latina girls’ fifteenth birthdays and symbolizes their entry into adulthood,) Julia is scandalized and even disgusted. She points out that she’s already almost sixteen, and doesn’t want the party to boot; Amá and Apá, however, insist on throwing it, explaining that they never got the chance to give Olga a party and are not going to make the same mistake twice. During the party, Julia is dressed up in a frilly and ridiculous peach gown, made to perform ritual dances and ceremonies, and has to put up with her entire family: all things she hates. Throughout the party Julia is visibly uncomfortable. She gorges herself on cake and wishes she had a book to read so that she wouldn’t have to greet so many people. The party comes to symbolize, both for the reader and for Julia, the ways that her family want to push her into being a “perfect Mexican daughter,” the fact that she never will become such a thing, and the pain and discomfort that this clash between what her parents blindly want and what she is will always produce.

The I Am Not Your Perfect Mexican Daughter quotes below all refer to the symbol of Julia’s Quinceañera. For each quote, you can also see the other characters and themes related to it (each theme is indicated by its own dot and icon, like this one:

). Note: all page numbers and citation info for the quotes below refer to the Knopf edition of I Am Not Your Perfect Mexican Daughter published in 2017.
Chapter 13 Quotes

Amá just shakes her head. “You know, Julia, maybe if you knew how to behave yourself, to keep your mouth shut, your sister would still be alive. Have you ever thought about that?” She finally says it. She says what her big, sad eyes were telling me all along.

Get the entire I Am Not Your Perfect Mexican Daughter LitChart as a printable PDF.
"My students can't get enough of your charts and their results have gone through the roof." -Graham S.
Download it! 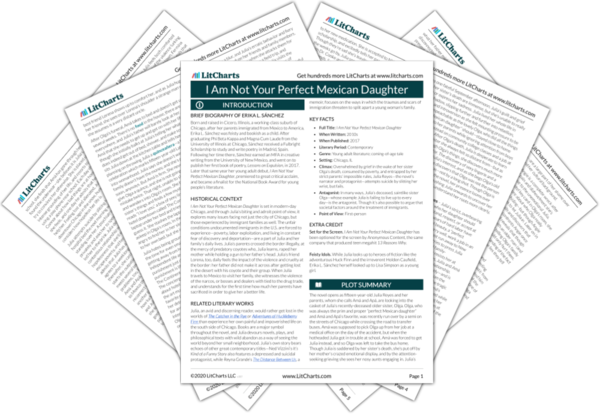 The timeline below shows where the symbol Julia’s Quinceañera appears in I Am Not Your Perfect Mexican Daughter. The colored dots and icons indicate which themes are associated with that appearance.

...is even more shocked when her mother announces that Julia is going to have a quinceañera—a traditional party which marks the entry of fifteen-year-old Latina girls into womanhood. Julia is confused—she’s... (full context)

...eating junk in secret. She tells Julia that she can’t be looking sallow for her quincé—she has to be “pretty for [her] family.” Julia feels a cramp in her stomach and... (full context)

Julia feels as if the date of her quinceañera is hanging over her “like the blade of a guillotine.” She’s been forced to take... (full context)

It is the night of Julia’s quinceañera. She is dressed in a “tight and tacky dress covered in frills, ruffles, and sequins.”... (full context) 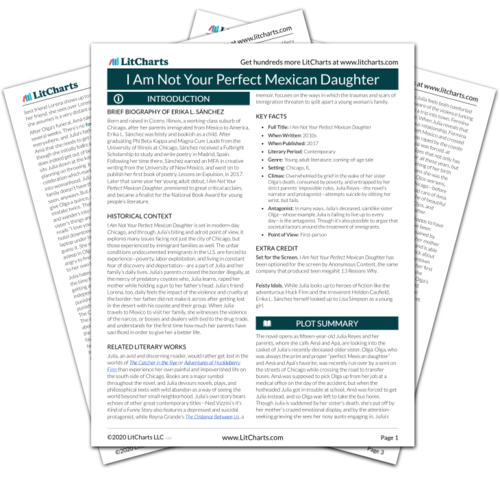 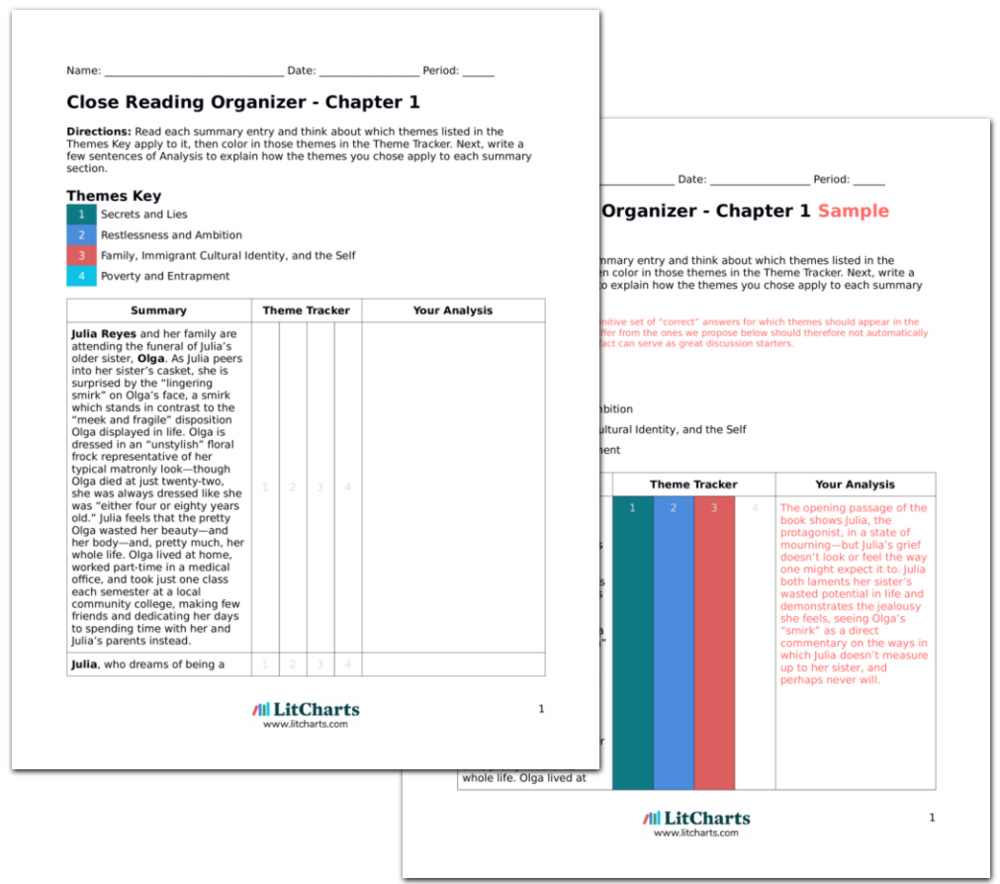