Get LitCharts A+
Henry is one of Dad’s former band mates, and his best friend. Henry used to be a “drunk playboy,” but when he began dating Willow, a nurse, he changed his ways. While he is angry when Dad leaves the band, he apologizes months later when his own baby daughter is born, and tells Dad that he finally understands what it means to put one’s family first.

Henry Quotes in If I Stay

The If I Stay quotes below are all either spoken by Henry or refer to Henry. For each quote, you can also see the other characters and themes related to it (each theme is indicated by its own dot and icon, like this one:

“I’d played that part of my life out. It was time. I didn’t even think twice about it, in spite of what Gramps or Henry might think. Sometimes you make choices in life and sometimes choices make you. Does that make any sense?”

Get the entire If I Stay LitChart as a printable PDF.
"My students can't get enough of your charts and their results have gone through the roof." -Graham S.
Download 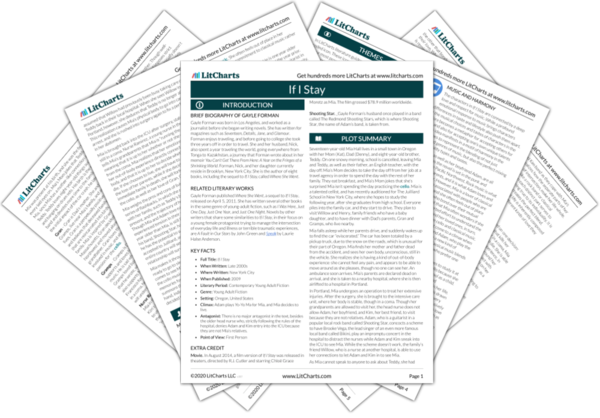 Henry Character Timeline in If I Stay

The timeline below shows where the character Henry appears in If I Stay. The colored dots and icons indicate which themes are associated with that appearance.

Mia’s Dad suggests that the family take a drive to visit Willow and Henry, married friends of the family who used to be musicians in the same punk-rock scene... (full context)

...piles into their old Buick, and Mia’s Dad begins to drive them to Willow and Henry’s house. Though Dad used to be notorious for riding his bike everywhere and not even... (full context)

Mia recalls that when Willow began to date Henry, her Dad’s band-mate, Henry was a “total drunk playboy,” but that Willow whipped him into... (full context)

...the birthing center, and watches her mother give birth to Teddy. When, after the birth, Henry comes to bring food to the new family of four, he tells Mia the story... (full context)

When Kerry dies, Mia, her family, Adam, Willow, and Henry drive several hours to Kerry’s hometown to attend his funeral. Although he was known for... (full context)

...leaving the band, even though Mom says she’s okay with him continuing to play shows. Henry becomes livid with Dad, and doesn’t speak to him for months. Henry only apologizes for... (full context)