Download this LitChart! (PDF)
Teachers and parents! Struggling with distance learning? Our Teacher Edition on Imagined Communities can help.

Welcome to the LitCharts study guide on Benedict Anderson's Imagined Communities. Created by the original team behind SparkNotes, LitCharts are the world's best literature guides.

A concise biography of Benedict Anderson plus historical and literary context for Imagined Communities.

A quick-reference summary: Imagined Communities on a single page.

In-depth summary and analysis of every chapter of Imagined Communities. Visual theme-tracking, too.

Explanations of Imagined Communities's symbols, and tracking of where they appear.

An interactive data visualization of Imagined Communities's plot and themes.

The son of an English mother and an Irish father from a lineage of Irish nationalists, Benedict Anderson grew up between China (where he was born while his father worked in a customs office), Ireland, and the United States. He studied classics at the University of Cambridge in England, from which he graduated in 1957, and then returned to the United States to earn a PhD at Cornell, which he finished in 1967 with a dissertation on Indonesian nationalist politics. Atypically for an academic, he gained widespread fame as a graduate student for publishing the so-called “Cornell Paper,” a 1965 document in which he and his co-authors and fellow graduate students Ruth McVey and Frederick Bunnell challenged the Indonesian government’s argument that an attempted coup d’état (government overthrow) in 1966 was a Communist scheme, an argument that led to the mass murder of at least 500,000 accused Communists. The fallout of the coup and massacres contributed to the upheaval of Indonesia’s political order and the nation’s transition to a long authoritarian rule by the president Suharto. After the Cornell Paper was leaked to the public and Anderson testified in court to defend an Indonesian Communist leader, he was banned from Indonesia for the more than three decades of Suharto’s rule (until 1998, when his first trip back became an important public spectacle). Anderson then turned his research focus to Thailand and the Philippines, although he remained a prominent expert on Indonesia and even edited the academic journal Indonesia for nearly two decades. Anderson spent his entire academic career teaching at Cornell (1965-2002), where he became the Aaron L. Binenkorb Professor Emeritus of International Studies, Government, and Asian Studies in 1988. Although widely decorated for his whole body of work, Anderson remains by far best known for Imagined Communities, which is still widely considered the most important study of nationalism. The book remains controversial in the (characteristically Eurocentric) academic world for arguing that nationalism began in the Americas, not in Europe. After retiring in 2002, Anderson spent most of the rest of his life in Southeast Asia, where he died in eastern Java (Indonesia) in 2015.
Get the entire Imagined Communities LitChart as a printable PDF.
"My students can't get enough of your charts and their results have gone through the roof." -Graham S.
Download 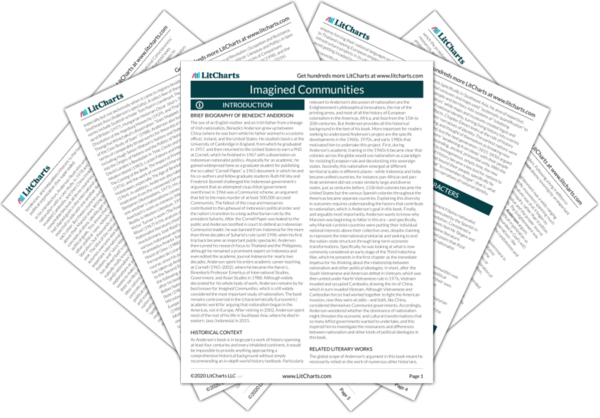 As Anderson’s book is in large part a work of history spanning at least four centuries and every inhabited continent, it would be impossible to provide anything approaching a comprehensive historical background without simply recommending an in-depth world history textbook. Particularly relevant to Anderson’s discussion of nationalism are the Enlightenment’s philosophical innovations, the rise of the printing press, and most of all the history of European colonialism in the Americas, Africa, and Asia from the 15th to 20th centuries. But Anderson provides all this historical background in the text of his book. More important for readers seeking to understand Anderson’s project are the specific developments in the 1960s, 1970s, and early 1980s that motivated him to undertake this project. First, during Anderson’s academic training in the 1960s it became clear that colonies across the globe would use nationalism as a paradigm for resisting European rule and decolonizing into sovereign states. Secondly, this nationalism emerged at different territorial scales in different places—while Indonesia and India became unified countries, for instance, pan-African and pan-Arab sentiment did not create similarly large and diverse states, just as centuries before, 13 British colonies became the Untied States but the various Spanish colonies throughout the Americas became separate countries. Explaining this diversity in outcomes requires understanding the factors that contribute to nationalism, which is Anderson’s goal in this book. Finally, and arguably most importantly, Anderson wants to know why Marxism was beginning to falter in this era—and specifically, why Marxist-Leninist countries were putting their individual national interests above their collective ones, despite claiming to represent the international proletariat and seeking to end the nation-state structure through long-term economic transformations. Specifically, he was looking at what is now commonly considered an early stage of the Third Indochina War, which he presents in the first chapter as the immediate impetus for his thinking about the relationship between nationalism and other political ideologies. In short, after the South Vietnamese and American defeat in Vietnam, which was then united under North Vietnamese rule in 1976, Vietnam invaded and occupied Cambodia, drawing the ire of China, which in turn invaded Vietnam. Although Vietnamese and Cambodian forces had worked together to fight the American invasion, now they were at odds—and both, like China, considered themselves Communist governments. Accordingly, Anderson wondered whether the dominance of nationalism might threaten the economic and cultural transformations that so many leftist governments wanted to undertake, and this inspired him to investigate the resonances and differences between nationalism and other kinds of political ideologies in this book.

Other Books Related to Imagined Communities

The global scope of Anderson’s argument in this book meant he necessarily relied on the work of numerous other historians, especially but not exclusively when it came to regions besides Southeast Asia (Anderson’s specialty). A select few of these works include Scottish scholar Tom Nairn’s landmark The Break-up of Britain (1977), Hungarian historian Oscar Jászi’s The Dissolution of the Hapsburg Monarchy (1929), and Thai historian Thongchai Winichakul’s dissertation “Siam Mapped: A History of the Geo-Body of Siam” (1988). Anderson also looks at a series of comparably broad works for theoretical inspiration, including Hugh Seton-Watson’s Nations and States: An Enquiry into the Origins of Nations and the Politics of Nationalism (1977), David Landes’s Revolution in Time: Clocks and the Making of the Modern World (1983), Lucien Febvre and Henri-Jean Martin’s The Coming of the Book: The Impact of Printing, 1450-1800 (1976), and the work of renowned Marxist historian Eric Hobsbawm, especially The Age of Revolution, 1789-1848 (1964). In addition, Anderson also takes historiographical inspiration from the renowned German critical theorist Walter Benjamin (Illuminations, 1973). His analysis of nations copying one another’s nationalisms comes in large part from Erich Auerbach’s work on mimesis (Mimesis: The Representation of Reality in Western Literature, 1957), and Anderson also uses Victor Turner’s work (The Forest of Symbols: Aspects of Ndembu Ritual (1967) in his analysis of the idea of pilgrimage. Nationalist literature cited by Anderson includes Filipino revolutionary José Rizal’s Noli Me Tángere (1978), the works of various Indonesian writers like Mas Marco Kartodikromo and Pramoedya Ananta Toer (e.g., This Earth of Mankind (1980) and House of Glass (1988)), and Mexican writer José Joaquín Fernandez de Lizardi’s El Periquillo Sarniento (1816). And, of course, since his publication of this book, a wealth of literature has taken up Anderson’s arguments and theories. In his Preface to the Second Edition of Imagined Communities, Anderson cites the following as important texts appearing in the twelve years after his book’s initial publication: “J. A. Armstrong’s Nations Before Nationalism (1982), John Breuilly’s Nationalism and the State (1982), Ernest Gellner’s Nations and Nationalism (1983), Miroslav Hroch’s Social Preconditions of National Revival in Europe (1985), Anthony Smith’s The Ethnic Origins of Nations (1986), P. Chatterjee’s Nationalist Thought and the Colonial World (1986), and Eric Hobsbawm’s Nations and Nationalism since 1788 (1990).” The decades since have seen important subsequent books by Chatterjee, Gellner, and Smith, along with a flood of literature—many hundreds, if not thousands, of books—about particular nationalist movements, general trends in nationalism around the globe, and nationalism as a theoretical issue. Good general readers and student-level introductions to nationalism include Thomas Hylland-Eriksen’s Ethnicity and Nationalism: Anthropological Perspectives (2010), Umut Özkirimli’s Contemporary Debates On Nationalism: A Critical Engagement (2005), and the compiled edition Nations and Nationalism: A Reader (ed. Spencer and Wollman, 2005). Finally, Benedict Anderson’s other most significant books include Java in a Time of Revolution: Occupation and Resistance, 1944–1946 (1972), In the Mirror: Literature and Politics in Siam in the American Era (1985), The Spectre of Comparisons: Nationalism, Southeast Asia, and the World (1998), and the posthumous memoir A Life Beyond Boundaries (2016).
Key Facts about Imagined Communities

Linguistic Mastery. The fluency with various cultures and masterful knowledge of world history that Anderson shows off in Imagined Communities are, perhaps, second only to his remarkable grasp of languages: in addition to his native English, he fluently spoke Indonesian, Javanese, Tagalog, and Thai, and had at least a proficient reading knowledge of French, German, Spanish, Russian, Latin, and Dutch. It is perhaps no wonder that one of Anderson’s obituaries lauded him as a “Man Without a Country.”

Star Siblings. Anderson wasn’t the only notable talent in his family: the comparably illustrious Marxist historian Perry Anderson is his younger brother, and his sister Melanie Anderson is a prominent anthropologist. 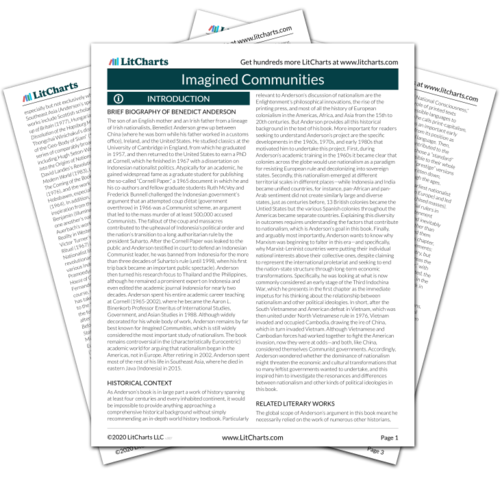 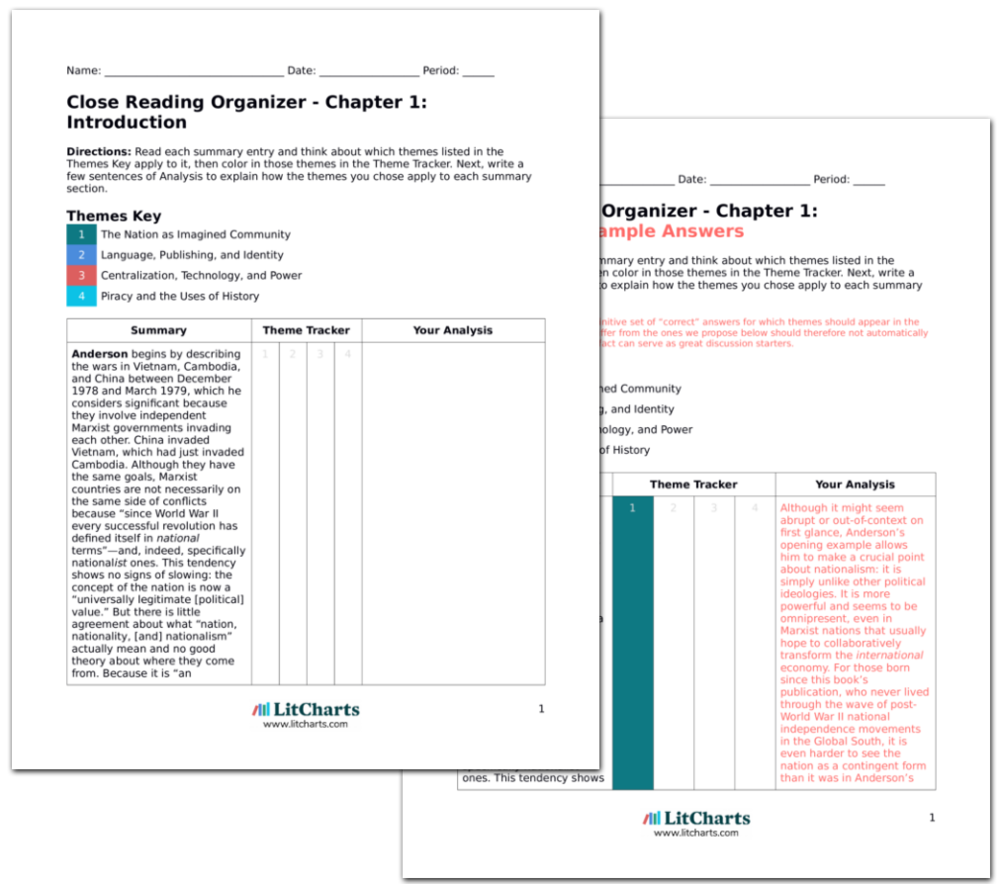