Religion is a powerful force in the lives of the novel's characters and in the politics of the Dominican Republic, which is a predominantly Catholic nation. Patria is the most religious of the sisters, and goes through the most personal religious struggles. She starts out wanting to be a nun, gives this up to get married, loses her faith after her baby is born dead, and then regains it with a vision of the Virgin Mary. In the political realm, the Catholic church remains neutral regarding Trujillo for years, which the sisters become bitter about. Patria’s shift into resistance coincides with that of the priest Padre de Jesús and other Catholics, after they witness a massacre during a religious retreat. Soon afterward the Catholic leadership finally decides to take a stand against Trujillo, and they condemn him from the pulpit. The regime responds with a full-on war against the church, but one of the most inspiring parts of the novel is when the Catholic church finally stands up for its people and fights Trujillo in its own way.

Alvarez also explores another interesting aspect of religion in the novel – the connection between a dictator and God. Part of Trujillo’s “personality cult” involves associating himself with God – his slogan is “God and Trujillo,” he is referred to as the country’s “Benefactor,” and people think of him as constantly watching over them, whether benevolently or malevolently. In Mamá’s house there is even a portrait of Trujillo next to a picture of Jesus. This especially affects the religious Patria, who thinks of Jesus as divine justice and Trujillo as earthly power. They are a dichotomy of good and evil, but Patria also grows angry with God for allowing Trujillo to rule on earth. Eventually she even starts “praying” to Trujillo, asking him to spare her family. She tries to think of Trujillo as only a man, but finally concludes that he must be “the evil one become flesh like Jesus.” Ultimately Trujillo’s propaganda works – he does become a kind of “god” – but it is an evil god, and even the church rises up against him. 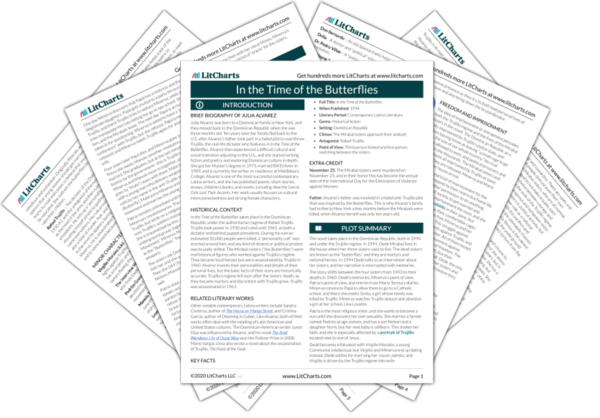 Religion Quotes in In the Time of the Butterflies

Below you will find the important quotes in In the Time of the Butterflies related to the theme of Religion.
Chapter 2 Quotes

When we got to school that fall, we were issued new history textbooks with a picture of you-know-who embossed on the cover so even a blind person could tell who the lies were about. Our history now followed the plot of the Bible. We Dominicans had been waiting for centuries for the arrival of our Lord Trujillo on the scene. It was pretty disgusting.
“All through nature there is a feeling ecstasy. A strange otherworldly light suffuses the house smelling of labor and sanctity. The 24th of October in 1891. God’s glory made flesh in a miracle. Rafael Leonidas Trujillo has been born!”

I see a guardia, and I think, who have you killed. I hear a police siren, and I think who is going to be killed. See what I mean?
I see the picture of our president with eyes that follow me around the room, and I am thinking he is trying to catch me doing something wrong. Before, I always thought our president was like God, watching over everything I did.

Minerva could tell. One day, we were lying side by side on the hammock strung just outside the galería. She must have caught me gazing at our picture of the Good Shepherd, talking to his lambs. Beside him hung the required portrait of El Jefe, touched up to make him look better than he was. “They’re a pair, aren’t they?” she noted.
That moment, I understood her hatred. My family had not been personally hurt by Trujillo, just as before losing my baby, Jesus had not taken anything away from me. But others had been suffering great losses…
I had heard, but I had not believed. Snug in my heart, fondling my pearl, I had ignored their cries of desolation. How could our loving, all-powerful Father allow us to suffer so? I looked up, challenging Him. And the two faces had merged!

That room was silent with the fury of avenging angels sharpening their radiance before they strike.
The priests had decided they could not wait forever for the pope and the archbishop to come around. The time was now, for the Lord had said, I come with the sword as well as the plow to set at liberty them that are bruised.
I couldn’t believe this was the same Padre de Jesús talking who several months back hadn’t known his faith from his fear! But then again, here in that little room was the same Patria Mercedes, who wouldn’t have hurt a butterfly, shouting, “Amen to the revolution.”
And so we were born in the spirit of the vengeful Lord, no longer His lambs.

Maybe because I was used to the Good Shepherd and Trujillo side by side in the old house, I caught myself praying a little greeting as I walked by.
Then another time, I came in from outside with my hands full of anthuriums. I looked up at him, and I thought why not. I set up a vase on the table right under his picture…
I don’t know if that’s how it started, but pretty soon, I was praying to him, not because he was worthy or anything like that. I wanted something from him, and prayer was the only way I knew to ask.

El Jefe entered in a wash of camera flashes. I don’t know what I thought I’d see – I guess after three months of addressing him, I was sure I’d feel a certain kinship with the stocky, overdressed man before me. But it was just the opposite. The more I tried to concentrate on the good side of him, the more I saw a vain, greedy, unredeemed creature. Maybe the evil one had become flesh like Jesus! Goosebumps jumped all up and down my bare arms. 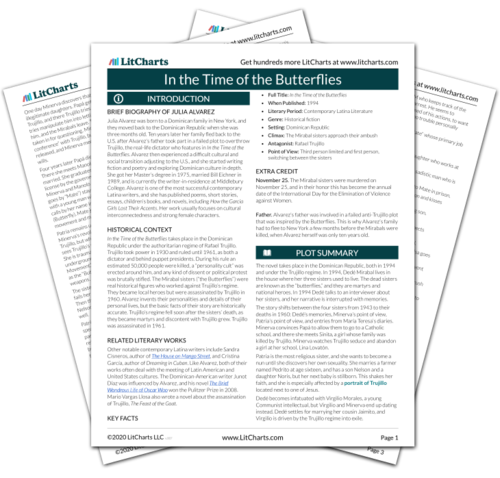 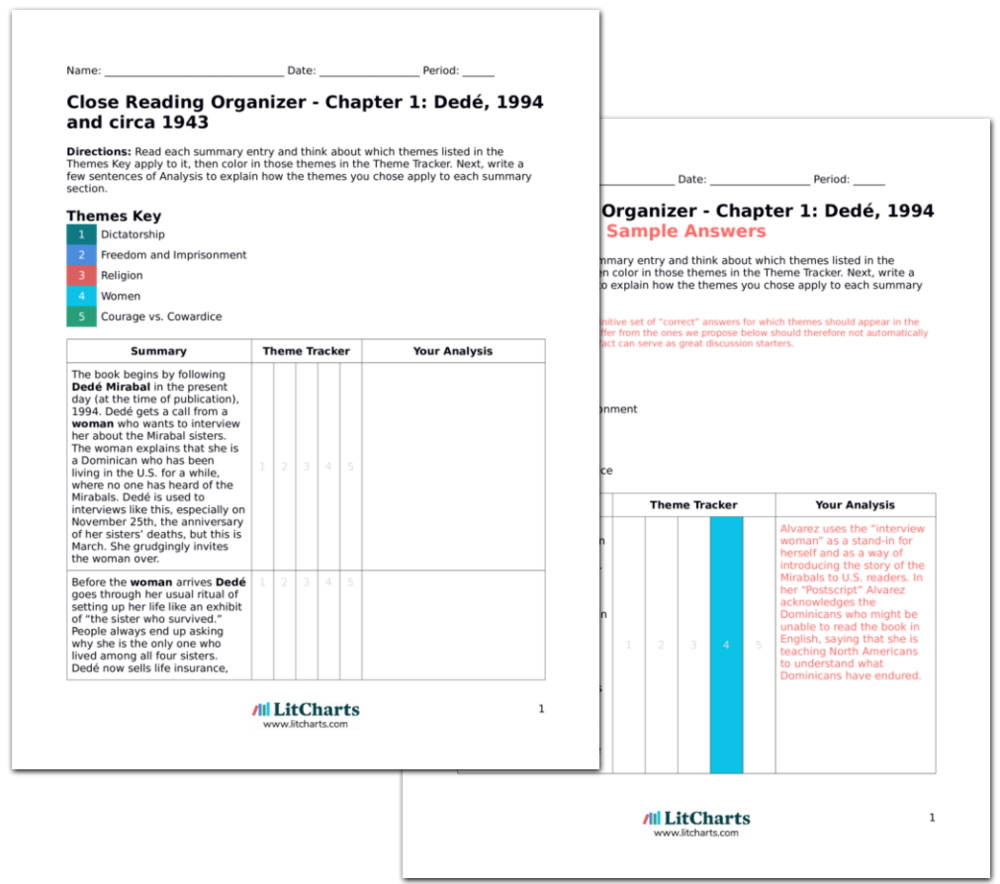