Download this LitChart! (PDF)
Teachers and parents! Struggling with distance learning? Our Teacher Edition on Invisible Cities can help.

Welcome to the LitCharts study guide on Italo Calvino's Invisible Cities. Created by the original team behind SparkNotes, LitCharts are the world's best literature guides.

A concise biography of Italo Calvino plus historical and literary context for Invisible Cities.

A quick-reference summary: Invisible Cities on a single page.

In-depth summary and analysis of every chapter of Invisible Cities. Visual theme-tracking, too.

Explanations of Invisible Cities's symbols, and tracking of where they appear.

An interactive data visualization of Invisible Cities's plot and themes.

Calvino was born in 1923 to Italian botanists and agronomists. His father spent time in Mexico before moving to Cuba, and his mother gave Calvino his first name to remind him of his Italian heritage—though Calvino’s family moved back to Europe when Calvino was two years old. His parents were openly derisive of both religion and the ruling National Fascist Party and as such, they exempted Calvino from religious classes at school. During World War II, Calvino enrolled at the University of Turin and then at the University of Florence in their Agriculture departments, hiding his literary interests. He went into hiding rather than join the military, decided that communists had the most convincing argument, and joined the communist Italian Resistance in 1944. Following the war, Calvino returned to Turin, completed a master’s thesis on Joseph Conrad, and became active in communist groups and publications. He began publishing novels and stories to great acclaim in the late 1940s, but his realist novels received poor reviews. After this, he began to write fantastical novels, all of which were well received. He left the Italian Communist Party after the Soviet Union invaded Hungary in 1957, and though he retained his belief in communism as a concept, he never joined another party. After the death of a close friend and the cultural revolution in France, Calvino went through an “intellectual depression” and joined the Oulipo group of writers. He wrote Invisible Cities during this time. Calvino died in 1985 of a cerebral hemorrhage.
Get the entire Invisible Cities LitChart as a printable PDF.
"My students can't get enough of your charts and their results have gone through the roof." -Graham S.
Download 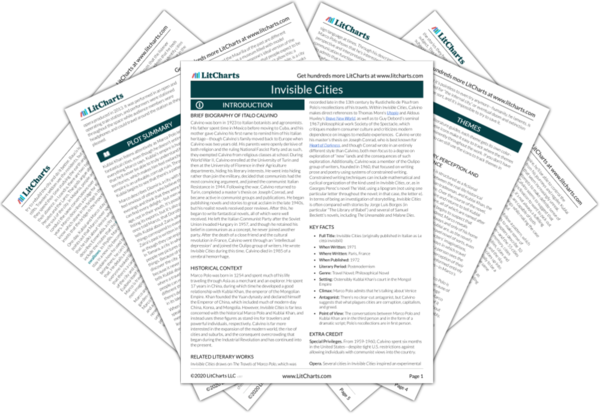 Marco Polo was born in 1254 and spent much of his life traveling through Asia as a merchant and an explorer. He spent 17 years in China, during which time he developed a good relationship with Kublai Khan, the emperor of the Mongolian Empire. Khan founded the Yuan dynasty and declared himself the Emperor of China, which included much of modern-day China, Korea, and Mongolia. However, Invisible Cities is far less concerned with the historical Marco Polo and Kublai Khan, and instead uses these figures as stand-ins for travelers and powerful individuals, respectively. Calvino is far more interested in the expansion of the modern world, the rise of cities and suburbs, and the consequent overcrowding that began during the Industrial Revolution and has continued into the present.

Other Books Related to Invisible Cities

Invisible Cities draws on The Travels of Marco Polo, which was recorded late in the 13th century by Rustichello de Pisa from Polo’s recollections of his travels. Within Invisible Cities, Calvino makes direct references to Thomas More’s Utopia and Aldous Huxley’s Brave New World, as well as to Guy Debord’s seminal 1967 philosophical work Society of the Spectacle, which critiques modern consumer culture and criticizes modern dependence on images to mediate experiences.  Calvino wrote his master’s thesis on Joseph Conrad, who is best known for Heart of Darkness, and though Conrad wrote in an entirely different style than Calvino, both men focus to a degree on exploration of “new” lands and the consequences of such exploration. Additionally, Calvino was a member of the Oulipo group of writers, founded in 1960, that focused on writing prose and poetry using systems of constrained writing. Constrained writing techniques can include mathematical and cyclical organization of the kind used in Invisible Cities, or, as in Georges Perec’s novel The Void, using a lipogram (not using one particular letter throughout the novel; in that case, the letter e). In terms of being an investigation of storytelling, Invisible Cities is often compared with stories by Jorge Luis Borges (in particular “The Library of Babel”) and several of Samuel Beckett’s novels, including The Unnamable and Malone Dies.
Key Facts about Invisible Cities

Special Privileges. From 1959-1960, Calvino spent six months in the United States—despite tight U.S. restrictions against allowing individuals with communist views into the country.

Opera. Several cities in Invisible Cities inspired an experimental opera produced in 2013. It was performed in an open and operating train station, and performers were stationed throughout the space while audience members wore headphones and could travel around the station as they pleased. 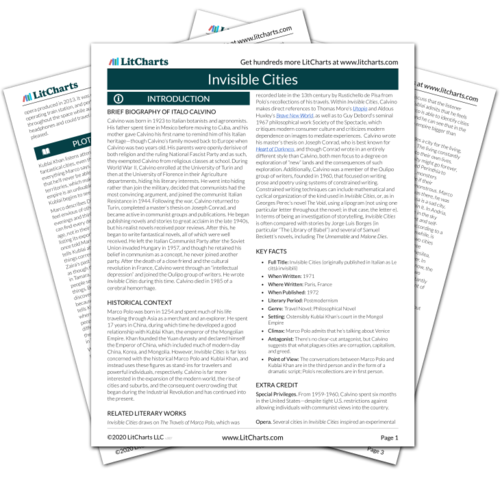 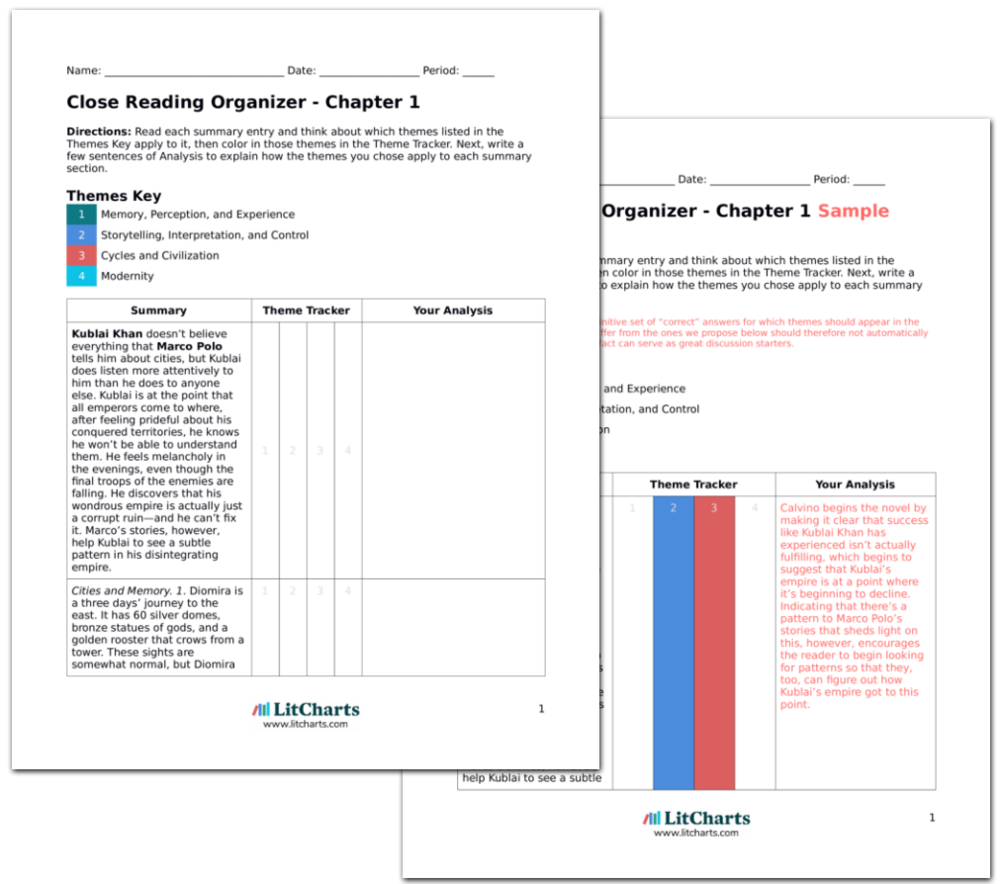