Download this LitChart! (PDF)
Teachers and parents! Struggling with distance learning? Our Teacher Edition on Iphigenia at Aulis can help.

Welcome to the LitCharts study guide on Euripides's Iphigenia at Aulis. Created by the original team behind SparkNotes, LitCharts are the world's best literature guides.

A concise biography of Euripides plus historical and literary context for Iphigenia at Aulis.

A quick-reference summary: Iphigenia at Aulis on a single page.

In-depth summary and analysis of every of Iphigenia at Aulis. Visual theme-tracking, too.

Explanations, analysis, and visualizations of Iphigenia at Aulis's themes.

Iphigenia at Aulis's important quotes, sortable by theme, character, or .

Description, analysis, and timelines for Iphigenia at Aulis's characters.

Explanations of Iphigenia at Aulis's symbols, and tracking of where they appear.

An interactive data visualization of Iphigenia at Aulis's plot and themes.

Euripides was Greek tragedian whose work, along with that of his predecessors Sophocles and Aeschylus, is widely regarded today as some of the most important art of the Classical Era. Only vague outlines of Euripides’s biography are known today, and many stories of his life are widely considered to be birthed from folklore: it is possible that he was born to a mother and father who believed, thanks to the word of an oracle, that their son was destined for athletic greatness and wasted no time enrolling him in an athletic education. In Euripides’s adult life, he seems to have been married twice—both marriages failed, and Euripides, according to legend, retreated into a cave on his home island of Salamis to read and write. Euripides first competed in the City Dionysia, an Athenian drama festival, in 455 B.C.E.—he won prizes for his work, two of which were delivered posthumously. Euripides’s dramas, which include Medea, Hippolytus, The Trojan Women, and The Bacchae, are notable for their focus on the internality of their characters—an important new development in the presentational tradition of Greek drama. Famed playwrights of later centuries such as Racine, Shakespeare, and Ibsen cited Euripides’s investment in emotion and psychology as enormous influences on their own work.
Get the entire Iphigenia at Aulis LitChart as a printable PDF.
"My students can't get enough of your charts and their results have gone through the roof." -Graham S.
Download 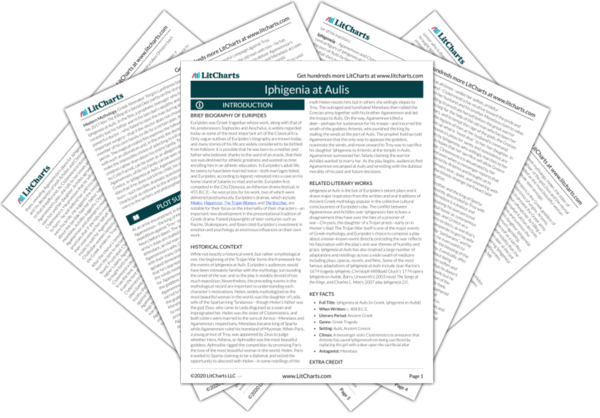 Historical Context of Iphigenia at Aulis

While not exactly a historical event, but rather a mythological one, the beginning of the Trojan War forms the framework for the events of Iphigeneia at Aulis. Euripides’s audiences would have been intimately familiar with the mythology surrounding the onset of the war, and so the play is notably devoid of too much exposition. Nevertheless, the preceding events in the mythological record are important to understanding each character’s motivations. Helen, widely mythologized as the most beautiful woman in the world, was the daughter of Leda, wife of the Spartan king Tyndareus—though Helen’s father was the god Zeus, who came to Leda disguised as a swan and impregnated her. Helen was the sister of Clytemnestra, and both sisters were married to the sons of Atreus—Menelaos and Agamemnon, respectively. Menelaos became king of Sparta while Agamemnon ruled his homeland of Mycenae. When Paris, a young prince of Troy, was appointed by Zeus to judge whether Hera, Athena, or Aphrodite was the most beautiful goddess, Aphrodite rigged the competition by promising Paris the love of the most beautiful woman in the world: Helen. Paris traveled to Sparta claiming to be a diplomat and seized the opportunity to abscond with Helen—in some retellings of the myth Helen resists him, but in others she willingly elopes to Troy. The outraged and humiliated Menelaos then rallied the Grecian army together with his brother Agamemnon and led the troops to Aulis. On the way, Agamemnon killed a deer—perhaps for sustenance for his troops—and incurred the wrath of the goddess Artemis, who punished the king by stalling the winds at the port of Aulis. The prophet Kalchas told Agamemnon that the only way to appease the goddess, reanimate the winds, and move onward to Troy was to sacrifice his daughter Iphigeneia to Artemis at the temple in Aulis. Agamemnon summoned her, falsely claiming the warrior Achilles wanted to marry her. As the play begins, audiences find Agamemnon encamped at Aulis and wrestling with the dubious morality of his past and future decisions.

Other Books Related to Iphigenia at Aulis

Iphigeneia at Aulis is the last of Euripides’s extant plays and it draws major inspiration from the written and oral traditions of Ancient Greek mythology popular in the collective cultural consciousness of Euripides’s day. The conflict between Agamemnon and Achilles over Iphigeneia’s fate echoes a disagreement they have over the fate of a prisoner of war—Chryseis, the daughter of a Trojan priest—early on in Homer’s Iliad. The Trojan War itself is one of the major events of Greek mythology, and Euripides’s choice to compose a play about a lesser-known event directly preceding the war reflects his fascination with the play’s anti-war themes of humility and grace. Iphigeneia at Aulis has also inspired a large number of adaptations and retellings across a wide swath of mediums including plays, operas, novels, and films. Some of the most famous adaptations of Iphigeneia at Aulis include Jean Racine’s 1674 tragedy Iphigénie, Christoph Willibald Gluck’s 1774 opera Iphigénie en Aulide, Barry Unsworth’s 2003 novel The Songs of the Kings, and Charles L. Mee’s 2007 play Iphigeneia 2.0.
Key Facts about Iphigenia at Aulis

Extra Credit for Iphigenia at Aulis

Modern Mythology. Greek filmmaker Yorgos Lanthimos based his 2017 film The Killing of a Sacred Deer partly on the story of Iphigeneia at Aulis. In the film, a prophetic teenager who has recently lost his father warns his late dad’s wealthy and powerful doctor—who failed to save the man during an important surgery—that if the doctor does not choose one member of his own family to die by a certain date, they will all perish. The magical-realist film explores the fallout of being met with such an ultimatum and, in the end, the doctor does indeed make the impossible choice of selecting to kill one of his own children rather than doom his entire family. The doctor, played by Colin Farrell, can be seen as an allegorical stand-in for Agamemnon, while his family can be seen as a stand-in for all of Greece. In Iphigeneia at Aulis, Agamemnon is tortured by the idea that if he does not kill his child, his country will suffer and burn—such terrible, dramatic questions and dilemmas are clearly just as relevant to the artists of the modern era as they were to the writers and philosophers of antiquity. 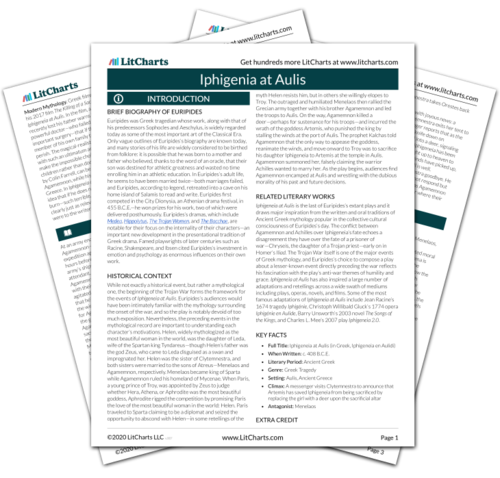 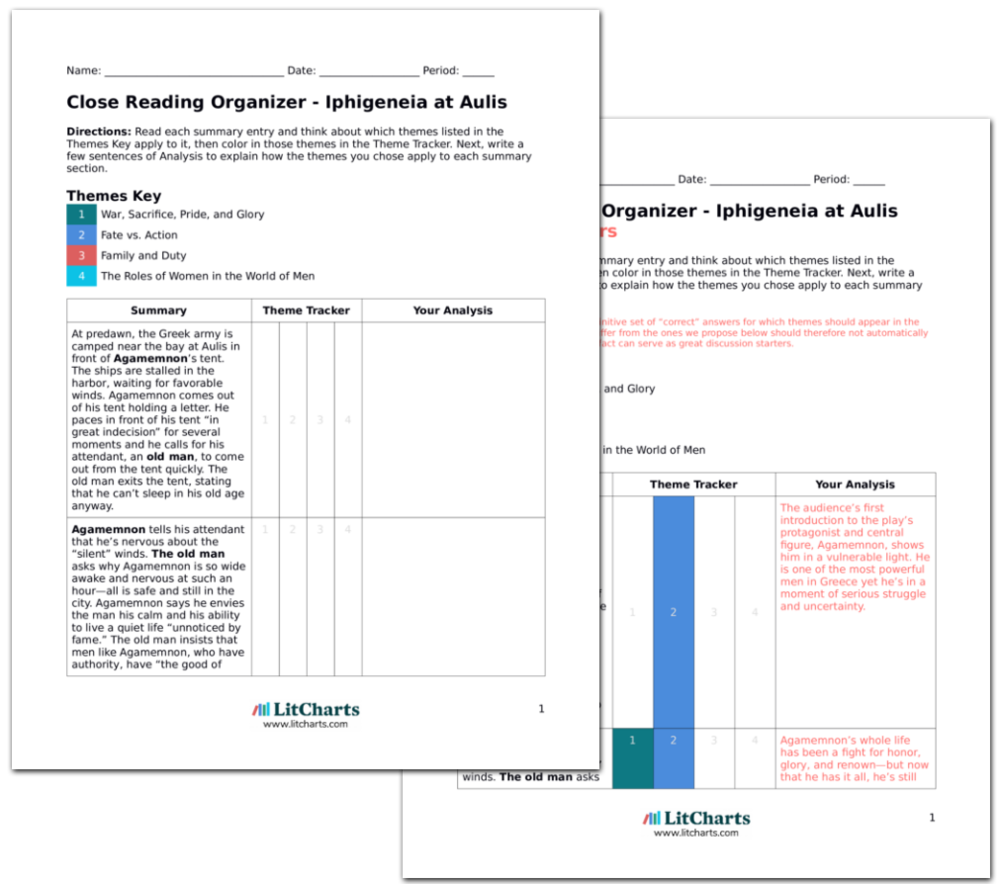