Download this LitChart! (PDF)
Teachers and parents! Struggling with distance learning? Our Teacher Edition on Island of the Blue Dolphins can help.

Welcome to the LitCharts study guide on Scott O’Dell's Island of the Blue Dolphins. Created by the original team behind SparkNotes, LitCharts are the world's best literature guides.

Island of the Blue Dolphins: Introduction

A concise biography of Scott O’Dell plus historical and literary context for Island of the Blue Dolphins.

A quick-reference summary: Island of the Blue Dolphins on a single page.

In-depth summary and analysis of every chapter of Island of the Blue Dolphins. Visual theme-tracking, too.

Island of the Blue Dolphins: Themes

Explanations, analysis, and visualizations of Island of the Blue Dolphins's themes.

Island of the Blue Dolphins: Quotes

Island of the Blue Dolphins's important quotes, sortable by theme, character, or chapter.

Island of the Blue Dolphins: Characters

Description, analysis, and timelines for Island of the Blue Dolphins's characters.

Island of the Blue Dolphins: Symbols

Explanations of Island of the Blue Dolphins's symbols, and tracking of where they appear.

An interactive data visualization of Island of the Blue Dolphins's plot and themes.

Born O’Dell Gabriel Scott in Los Angeles, O’Dell grew up moving around California a lot. In addition to spending a lot of time in the natural landscape—Los Angeles was still considered a frontier town when O’Dell was born—O’Dell also excelled in school. When he started college, though, O’Dell was shocked to discover that he was no longer the brightest student in his class, which he suggests is why he attended four different colleges. He published his first book, a nonfiction work, when he was 25 and published nonfiction and novels for adults for decades. During this time, his name was accidentally printed in a book as Scott O’Dell rather than O’Dell Gabriel Scott—and he liked it so much that he ultimately legally changed his name. He served in both World War I and World War II, becoming a full-time writer after World War II. Island of the Blue Dolphins, published in 1960, was his first book for children. Heavily inspired by O’Dell’s childhood adventures, it won the Newbery Medal. He went on to publish more than two dozen books for young readers, almost all of them historical fiction. To encourage other authors to write historical fiction, he established the Scott O’Dell Award for Historical Fiction in 1984—and he won this award two years later. He was married twice and died at age 91.
Get the entire Island of the Blue Dolphins LitChart as a printable PDF.
"My students can't get enough of your charts and their results have gone through the roof." -Graham S.
Download 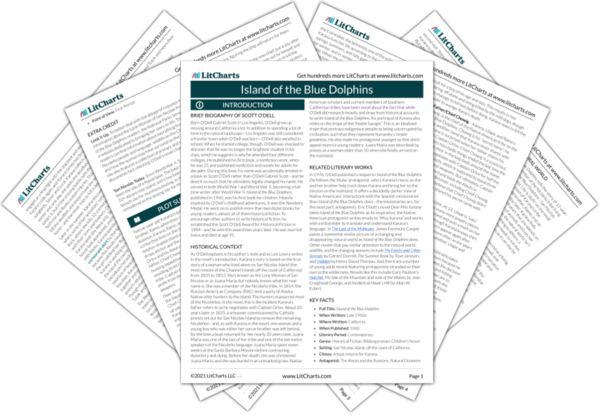 Historical Context of Island of the Blue Dolphins

As O’Dell explains in his author’s note and as Lois Lowry writes in the novel’s introduction, Karana’s story is based on the true story of a woman who lived alone on San Nicolas Island (the most remote of the Channel Islands off the coast of California) from 1835 to 1853. She’s known as the Lone Woman of San Nicolas or as Juana Maria, but nobody knows what her real name is. She was a member of the Nicoleño tribe. In 1814, the Russian-American Company (RAC) sent a party of Alaska Native otter hunters to the island. The hunters massacred most of the Nicoleños; in the novel, this is the incident Karana’s father refers to as he negotiates with Captain Orlov. About 20 years later, in 1835, a schooner commissioned by Catholic priests set out for San Nicolas Island to remove the remaining Nicoleños—and, as with Karana in the novel, one woman and a young boy who was either her son or brother was left behind. By the time a boat returned for her nearly 20 years later, Juana Maria was one of the last of her tribe and one of the last native speakers of the Nicoleño language. Juana Maria spent seven weeks at the Santa Barbara Mission before contracting dysentery and dying. Before her death, she was christened Juana Maria, and she was buried in an unmarked grave. Native American scholars and current members of Southern Californian tribes have been vocal about the fact that while O’Dell did research heavily and draw from historical accounts to write Island of the Blue Dolphins, his portrayal of Karana also relies on the trope of the “Noble Savage.” This is an idealized trope that portrays indigenous people as being uncorrupted by civilization, such that they represent humanity’s innate goodness. He also made his protagonist younger so that she’d appeal more to young readers; Juana Maria was described by priests as a woman older than 50 when she finally arrived on the mainland.

Other Books Related to Island of the Blue Dolphins

In 1976, O’Dell published a sequel to Island of the Blue Dolphins. Zia follows the titular protagonist, who’s Karana’s niece, as she and her brother help track down Karana and bring her to the mission on the mainland. It offers a decidedly darker view of Native Americans’ interactions with the Spanish missionaries than Island of the Blue Dolphins does—the missionaries are, for the most part, antagonists. Eric Elliott’s novel Dear Miss Karana takes Island of the Blue Dolphins as its inspiration; the Native American protagonist writes emails to “Miss Karana” and works with a tribal elder to translate and understand Karana’s language. In The Last of the Mohicans, James Fenimore Cooper paints a somewhat similar picture of a changing and disappearing natural world as Island of the Blue Dolphins does. Other novels that pay similar attention to the natural world, wildlife, and the changing seasons include My Family and Other Animals by Gerard Durrell, The Summer Book by Tove Jansson, and Walden by Henry David Thoreau. And there are a number of young adult novels featuring protagonists stranded on their own in the wilderness. Novels like this include Gary Paulson’s Hatchet, My Side of the Mountain and Julie of the Wolves by Jean Craighead George, and Incident at Hawk’s Hill by Allan W. Eckert.
Key Facts about Island of the Blue Dolphins

Extra Credit for Island of the Blue Dolphins

Look It Up. To better deal with the deluge of requests for information about the Lone Woman of San Nicolas from Island of the Blue Dolphins readers, the National Parks Service created a website dedicated to bringing her story to life. There, curious readers can find information about everything from the Nicoleño people and language, wildlife on the Channel Islands, and how the woman may have survived on the island alone. The site also features a collection of primary and secondary source documents fact-checking O’Dell’s novel chapter by chapter.

San Nicolas Today. Since World War II, San Nicolas Island has been the site of a Naval base. The base spans the entirety of the 22+ square mile island, and it has been used off and on as a launch site for munitions testing. In the 1940s, it was even considered as the testing site for the first atomic bomb. 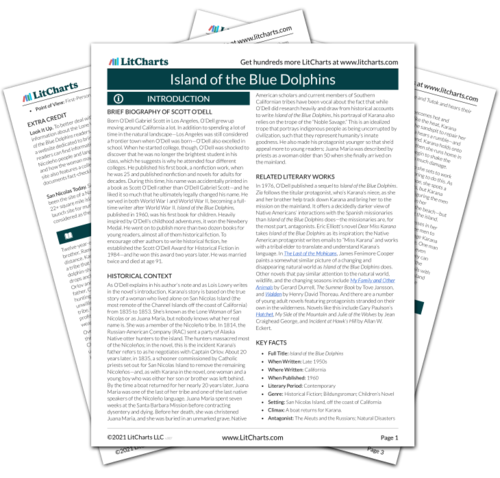 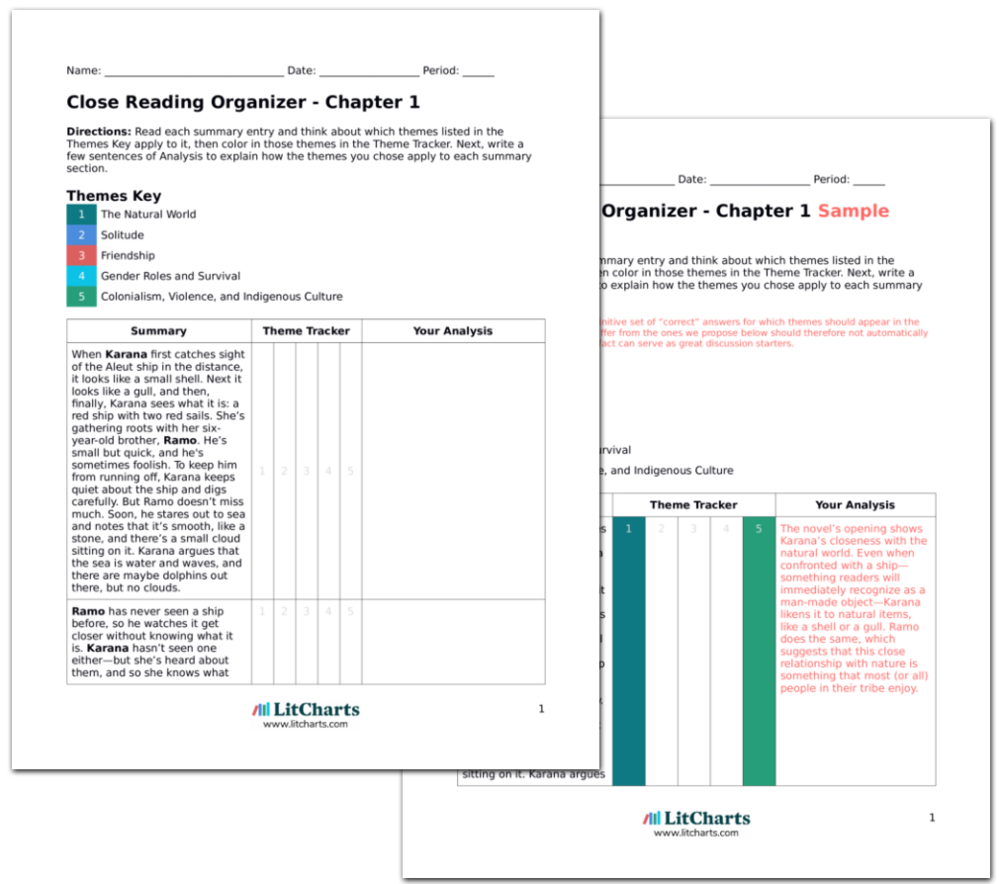