Download this LitChart! (PDF)
Teachers and parents! Struggling with distance learning? Our Teacher Edition on Ivy Day in the Committee Room can help.

Welcome to the LitCharts study guide on James Joyce's Ivy Day in the Committee Room. Created by the original team behind SparkNotes, LitCharts are the world's best literature guides.

A concise biography of James Joyce plus historical and literary context for Ivy Day in the Committee Room.

A quick-reference summary: Ivy Day in the Committee Room on a single page.

In-depth summary and analysis of every of Ivy Day in the Committee Room. Visual theme-tracking, too.

Explanations, analysis, and visualizations of Ivy Day in the Committee Room's themes.

Ivy Day in the Committee Room's important quotes, sortable by theme, character, or .

Description, analysis, and timelines for Ivy Day in the Committee Room's characters.

Description, analysis, and timelines for Ivy Day in the Committee Room's terms.

Explanations of Ivy Day in the Committee Room's symbols, and tracking of where they appear.

An interactive data visualization of Ivy Day in the Committee Room's plot and themes.

Born in Dublin in the throes of Ireland’s fight for independence from England, James Joyce was steeped in Irish patriotism during his formative years. His father, an abusive alcoholic, was staunchly anti-English, and his stint as an election worker likely influenced Joyce’s “Ivy Day in the Committee Room.” Joyce had a typical classical education, run by Jesuits, full of Catholic theology and heavily focused on ancient Greek and Roman literature. Young Joyce hated school but absorbed the classical texts and theological culture like a sponge. Sick of Dublin, he left home young and would return very few times in his life—never with joy—preferring continental cities like Paris and Trieste. As an expatriate, he struggled to support his wife and children. He taught English but, as a writer, he kept his literary standards high, producing only challenging, cutting-edge (and not necessarily commercial) fiction. His autobiographical novel A Portrait of the Artist as a Young Man (1914-15), and his story collection Dubliners (1914), in which “Ivy Day” appears, both provide an embittered take on his hometown in a high realist style. Never smart with money but full of self-confidence, Joyce relied in later years on literary patrons who recognized his immense talent. His long novel Ulysses (1922), which follows two Dubliners over the course of a single day, was championed by fellow writers like Ezra Pound and T. S. Eliot, and was pushed to completion by a shrewd bookseller in Paris. Controversial at the time for its frank depiction of sex, Ulysses soon became—and remains—regarded by many as the greatest novel in English. Joyce’s menacingly difficult magnum opus Finnegans Wake (1939), over which he labored for 17 years with a young Samuel Beckett as secretary and moral supporter, is one of the most creative and poetic commentaries ever produced on the way humans use language. These last two books continue to obsess and confound scholars; they have secured Joyce’s reputation as one of the most creative novelists in history and an essential leader of the Modernist movement.
Get the entire Ivy Day in the Committee Room LitChart as a printable PDF.
"My students can't get enough of your charts and their results have gone through the roof." -Graham S.
Download 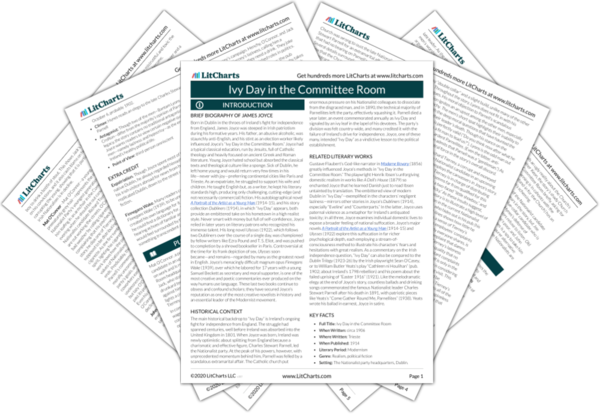 Historical Context of Ivy Day in the Committee Room

The main historical backdrop to “Ivy Day” is Ireland’s ongoing fight for independence from England. The struggle had spanned centuries, well before Ireland was absorbed into the United Kingdom in 1801. When Joyce was born, Ireland was newly optimistic about splitting from England because a charismatic and effective figure, Charles Stewart Parnell, led the Nationalist party. At the peak of his powers, however, with unprecedented momentum behind him, Parnell was felled by a scandalous extramarital affair. The Catholic church put enormous pressure on his Nationalist colleagues to dissociate from the disgraced man, and in 1890, the technical majority of Parnellites left the party, effectively squashing it. Parnell died a year later, an event commemorated annually as Ivy Day and signaled by an ivy leaf in the lapel of his devotees. The party’s division was felt country-wide, and many credited it with the failure of Ireland’s drive for independence. Joyce, one of these many, intended “Ivy Day” as a vindictive lesson to the political establishment.

Other Books Related to Ivy Day in the Committee Room

Gustave Flaubert’s God-like narrator in Madame Bovary (1856) greatly influenced Joyce’s methods in “Ivy Day in the Committee Room.” The playwright Henrik Ibsen’s unforgiving domestic realism in works like A Doll’s House (1879) so enchanted Joyce that he learned Danish just to read Ibsen untainted by translation. The embittered view of modern Dublin in “Ivy Day”—exemplified in the characters’ negligent laziness—mirrors other stories in Joyce’s Dubliners (1914), especially “Eveline” and “Counterparts.” In the latter, Joyce uses paternal violence as a metaphor for Ireland’s antiquated toxicity; in all three, Joyce examines individual domestic lives to expose a broader feeling of national suffocation. Joyce’s major novels A Portrait of the Artist as a Young Man (1914-15) and Ulysses (1922) explore this suffocation in far richer psychological depth, each employing a stream-of-consciousness method to illustrate his characters’ fears and hesitations with great realism. As a commentary on the Irish independence question, “Ivy Day” can also be compared to the Dublin Trilogy (1923-26) by the Irish playwright Sean O’Casey, or to William Butler Yeats’s play “Cathleen ni Houlihan” (pub. 1902; about Ireland’s 1798 rebellion) and his poem about the failed uprising of “Easter 1916” (1921). Like the melodramatic elegy at the end of Joyce’s story, countless ballads and drinking songs commemorated the famous Nationalist leader Charles Stewart Parnell after his death in 1891, with patriotic pieces like Yeats’s “Come Gather Round Me, Parnellites” (1938). Yeats wrote his ballad in earnest, Joyce in satire.
Key Facts about Ivy Day in the Committee Room

Extra Credit for Ivy Day in the Committee Room

Expatriation. Though Joyce spent most of his life avoiding his native Dublin, he always regarded himself as Irish. He begged his Irish visitors abroad for news from home and obsessively replicated Dublin, down to the street corner, in his hyperrealist fiction.

Finnegans Wake. Many readers consider Joyce’s final work, Finnegans Wake (1939), to be unreadable. This is because he created his own language for it, a mishmash of all the languages he could find a dictionary for. Joyce hoped readers, upon hearing echoes of familiar and foreign phrases in the book, would feel surrounded by the world’s cultures and discover something transcendent about the common human experience. 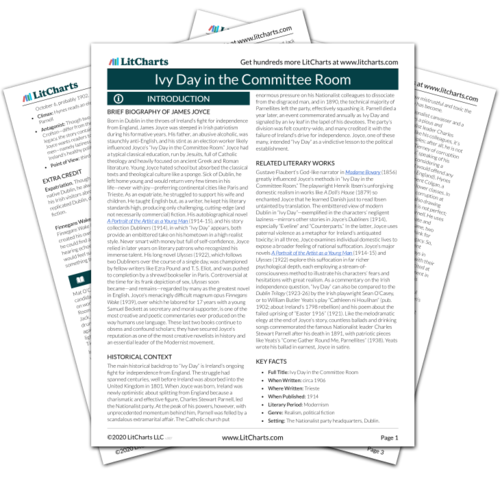 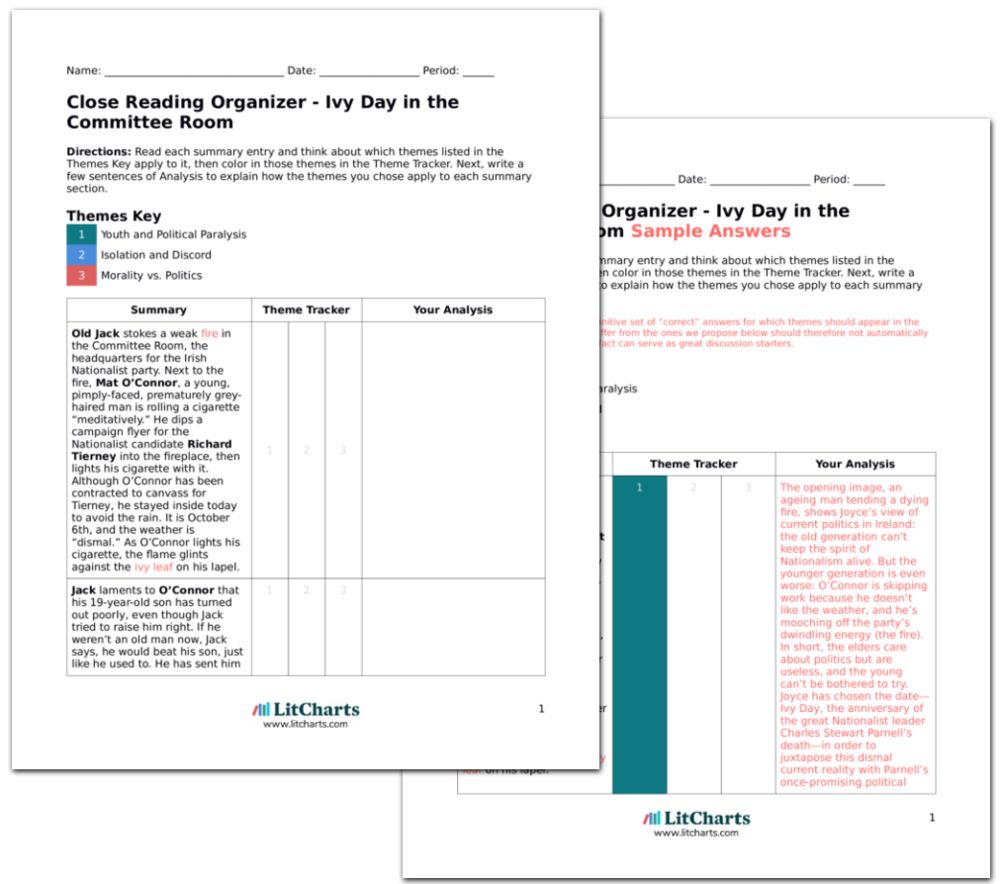