Get LitCharts A+
The Elder Gull of Jonathan’s new Flock in the plane beyond earth. He is an enormously skilled flyer, and has been empowered by his age rather than “enfeebled” by it like most Elder Gulls. It is Chiang who encourages Jonathan to stop seeing himself as “trapped inside a limited body,” and begin to understand that his true nature is—as every gull’s true nature is—“everywhere at once across space and time.” Chiang’s instruction is instrumental in Jonathan’s evolution and progression, and with Chiang’s help, Jonathan is able to traverse great distances in the blink of an eye.

The Jonathan Livingston Seagull quotes below are all either spoken by Chiang or refer to Chiang. For each quote, you can also see the other characters and themes related to it (each theme is indicated by its own dot and icon, like this one:

). Note: all page numbers and citation info for the quotes below refer to the Scribner edition of Jonathan Livingston Seagull published in 2014.
Part Two Quotes

"I want to learn to fly like that," Jonathan said, and a strange light glowed in his eyes. "Tell me what to do."

Chiang spoke slowly and watched the younger gull ever so carefully. "To fly as fast as thought, to anywhere that is," he said, "you must begin by knowing that you have already arrived." The trick, according to Chiang, was for Jonathan to stop seeing himself as trapped inside a limited body that had a forty-two-inch wingspan and performance that could be plotted on a chart. The trick was to know that his true nature lived, as perfect as an unwritten number, everywhere at once across space and time.

Jonathan kept at it, fiercely, day after day, from before sunrise till past midnight. And for all his effort he moved not a feather-width from his spot.

"Forget about faith!" Chiang said it time and again. "You didn't need faith to fly, you needed to understand flying. This is just the same. Now try again. […]"

Then one day Jonathan, standing on the shore, closing his eyes, concentrating, all in a flash knew what Chiang had been telling him. "Why, that's true! I am a perfect, unlimited gull!" He felt a great shock of joy.

"Good!" said Chiang, and there was victory in his voice. Jonathan opened his eyes. He stood alone with the Elder on a totally different seashore—trees down to the water's edge, twin yellow suns turning overhead.

Jonathan stayed and worked with the new birds coming in, who were all very bright and quick with their lessons. But the old feeling came back, and he couldn't help but think that there might be one or two gulls back on Earth who would be able to learn, too. How much more would he have known by now if Chiang had come to him on the day that he was Outcast!

“Sully, I must go back," [Jonathan] said at last. "Your students are doing well. They can help you bring the newcomers along."

Sullivan sighed, but he did not argue. "l think I'll miss you, Jonathan," was all he said.

"Sully, for shame!" Jonathan said in reproach, "and don't be foolish! What are we trying to practice every day? lf our friendship depends on things like space and time, then when we finally overcome space and time, we've destroyed our own brotherhood! But overcome space, and all we have left is Here. Overcome time, and all we have left is Now. And in the middle of Here and Now, don't you think that we might see each other once or twice?"

Unlock with LitCharts A+
Get the entire Jonathan Livingston Seagull LitChart as a printable PDF.
"My students can't get enough of your charts and their results have gone through the roof." -Graham S.
Download 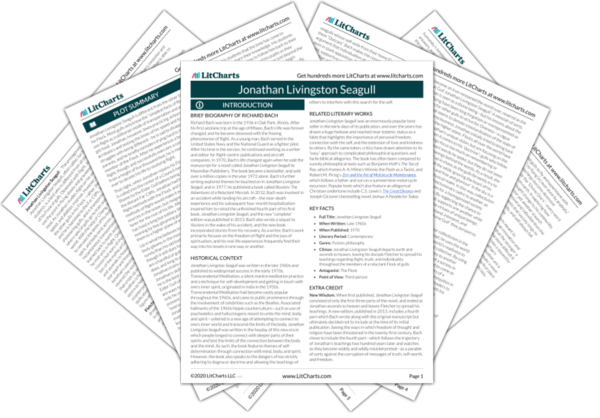 The timeline below shows where the character Chiang appears in Jonathan Livingston Seagull. The colored dots and icons indicate which themes are associated with that appearance.

Chiang says that Jonathan will at last begin to touch heaven in the moment that he... (full context)

Jonathan is “dazzled” completely by Chiang’s skill, and asks how far Chiang can go. Chiang replies that he has been “everywhere... (full context)

As the days go by, Jonathan tries very hard to learn to fly like Chiang, but cannot move even an inch from the spot where he stands. Chiang reminds Jonathan... (full context)

When Jonathan returns to the original shore with Chiang, the other gulls congratulate him. Jonathan demurs, though, insisting that he has much more to... (full context)