Download this LitChart! (PDF)
Teachers and parents! Struggling with distance learning? Our Teacher Edition on Kabuliwala can help.

Welcome to the LitCharts study guide on Rabindranath Tagore's Kabuliwala. Created by the original team behind SparkNotes, LitCharts are the world's best literature guides.

A concise biography of Rabindranath Tagore plus historical and literary context for Kabuliwala.

A quick-reference summary: Kabuliwala on a single page.

In-depth summary and analysis of every of Kabuliwala. Visual theme-tracking, too.

Explanations of Kabuliwala's symbols, and tracking of where they appear.

An interactive data visualization of Kabuliwala's plot and themes.

Rabindranath Tagore was born May 7, 1861, in British-controlled India. He was the youngest of 13 children and was raised in his ancestral home, Jorasanko, until his father sent him to Brighton, England, to study law. However, Tagore dropped out of school and studied Shakespeare before returning to India and marrying Mrinalini Devi. Tagore had begun writing poetry when he was eight and publishing under a pseudonym eight years after that, and in 1901, he founded an experimental school at Santiniketan in 1901. At Santiniketan, Tagore continued to write and rapidly gained more fame and respect for his poetry, short stories, and songs. In 1913, he was awarded the Nobel Prize in Literature and began traveling all over the world to deliver lectures and meet with some of the most notable names in literature, science, politics, and art, including Albert Einstein, William Butler Yeats, Mussolini, Thomas Mann, Robert Frost, and George Bernard Shaw. In 1921 he established Visva-Bharati University, which continues to be one of the most popular universities in India. Tagore traveled all over the world, visiting at least 30 countries on five continents, but in the four years before his death he experienced chronic pain and returned to his family home at Jorasanko, where he died on August 7, 1941.
Get the entire Kabuliwala LitChart as a printable PDF.
"My students can't get enough of your charts and their results have gone through the roof." -Graham S.
Download 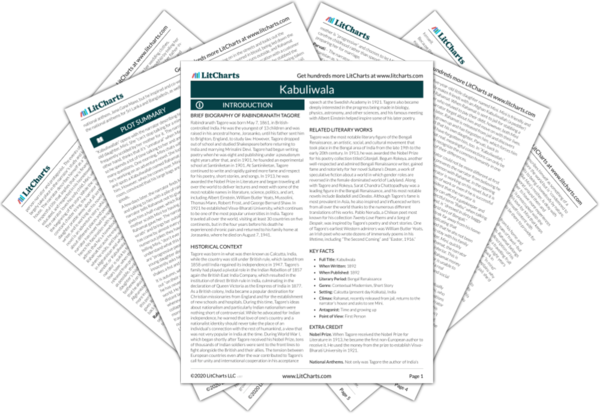 Tagore was born in what was then known as Calcutta, India, while the country was still under British rule, which lasted from 1858 until India regained its independence in 1947. Tagore’s family had played a pivotal role in the Indian Rebellion of 1857 again the British East India Company, which resulted in the institution of direct British rule in India, culminating in the declaration of Queen Victoria as the Empress of India in 1877. As a British colony, India became a popular destination for Christian missionaries from England and for the establishment of new schools and hospitals. During this time, Tagore’s ideas about nationalism and particularly Indian nationalism were nothing short of controversial. While he advocated for Indian independence, he warned that love of one’s country and a nationalist identity should never take the place of an individual’s connection with the rest of humankind, a view that was not very popular in India at the time. During World War I, which began shortly after Tagore received his Nobel Prize, tens of thousands of Indian soldiers were sent to the front lines to fight alongside the British and their allies. The tension between European countries even after the war contributed to Tagore’s call for unity and international cooperation in his acceptance speech at the Swedish Academy in 1921. Tagore also became deeply interested in the progress being made in biology, physics, astronomy, and other sciences, and his famous meeting with Albert Einstein helped inspire some of his later poetry.

Other Books Related to Kabuliwala

Tagore was the most notable literary figure of the Bengali Renaissance, an artistic, social, and cultural movement that took place in the Bengal area of India from the late 19th to the early 20th century. In 1913, he was awarded the Nobel Prize for his poetry collection titled Gitanjali. Begum Rokeya, another well-respected and admired Bengali Renaissance writer, gained fame and notoriety for her novel Sultana’s Dream, a work of speculative fiction about a world in which gender roles are reversed in the female-dominated world of Ladyland. Along with Tagore and Rokeya, Sarat Chandra Chattopadhyay was a leading figure in the Bengali Renaissance, and his most notable novels include Badadidi and Devdas. Although Tagore’s fame is most prevalent in Asia, he also inspired and influenced writers from all over the world thanks to the numerous different translations of his works. Pablo Neruda, a Chilean poet most known for his collection Twenty Love Poems and a Song of Despair, was inspired by Tagore’s poetry and short stories. One of Tagore’s earliest Western admirers was William Butler Yeats, an Irish poet who wrote dozens of immensely poems in his lifetime, including “The Second Coming” and “Easter, 1916.”
Key Facts about Kabuliwala

Nobel Prize. When Tagore received the Nobel Prize for Literature in 1913, he became the first non-European author to receive it. He used the money from the prize to establish Visva-Bharati University in 1921.

National Anthems. Not only was Tagore the author of India’s national anthem, Jana Gana Mana, but he inspired and co-wrote the national anthems for Sri Lanka and Bangladesh, as well. 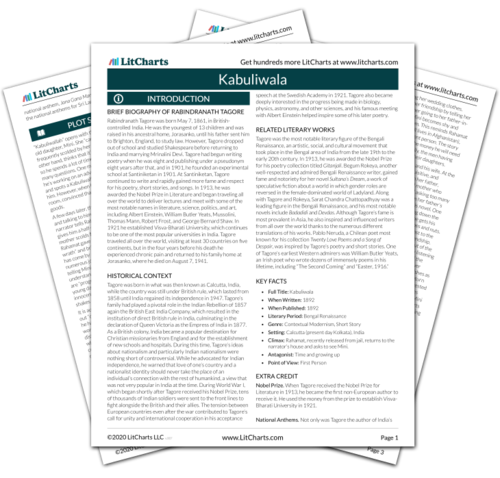 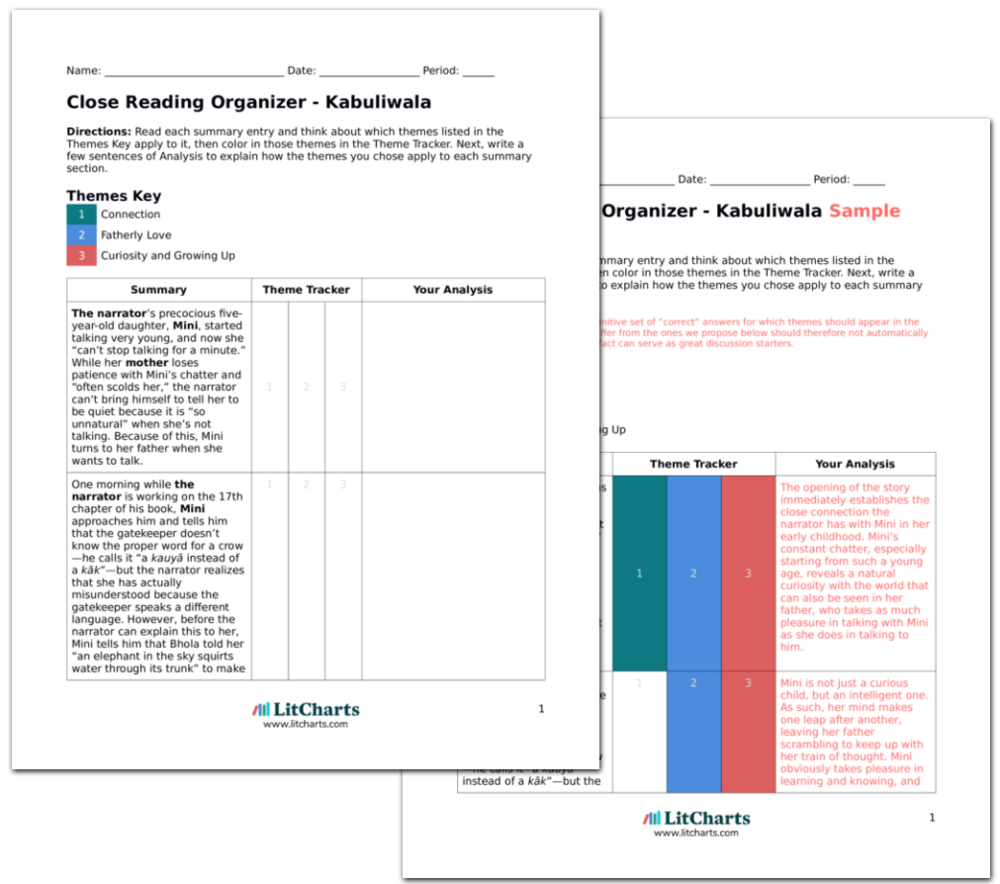