Johannes Mark Mathabane begins his story when he is five years old, living under apartheid in South Africa. He wakes up to the police raiding the ghetto in Alexandra—a sub-section of Johannesburg, South Africa—looking for black adults without their passbooks in order to arrest or extort them. Every time the police arrives, Mathabane’s mother flees, leaving him and his siblings alone. His father is often arrested. As a young boy, Mathabane becomes conditioned to the constant threat of police; they hover in his mind.

When Mathabane is six, his father loses his job. The police arrest him for unemployment, even though he is looking for work, and throw him in jail for almost a year. During that time, Mathabane’s family lives on the brink of starvation, surviving by digging for food scraps at a local dump. When his father returns, Mathabane sees that prison changed him, turned him into a “brute.” Mathabane’s father gets his old job back, but spends much of his wages on drinking and gambling; the family remains desperately poor. Mathabane starts spending his days with a gang of boys his age. They often sell empty bottles to buy tickets into a local cinema where they watch violent films made by white people. Mathabane believes that the white world must be as violent as the films. Although his parents believe in tribal ancestors and voodoo, Mathabane’s family visits a Christian evangelism meeting. The black preacher insults tribal beliefs and claims they must all follow the white man’s religion. Mathabane and his father both leave with a bitter hatred of Christianity.

Food prices, rent, and bus fare rise, but Mathabane’s father’s wages remain the same. His mother starts looking for work, but struggles to find any. Starving, Mathabane follows a group of young boys into a Zulu warrior barracks where they say they can get him food, until he realizes that these boys prostitute themselves to grown men in exchange for food and money. Mathabane flees, untouched, but horrified.

After Mathabane’s father loses his job again, Mathabane and his father travel to his father’s tribal homeland to see a witch doctor who will give his father a talisman for good fortune. Mathabane is struck by how destitute the tribal reserve is. When his father suggests he’ll leave Mathabane there so he can grow up to be a proper tribal man, Mathabane says that he’d rather die, so his father desists. When they return to Alexandra, Mathabane’s mother has another baby. They learn that the government plans to demolish their section of Alexandra, so they move to a new part of the ghetto full of migrant workers from the tribal reserves. Between his parents and his neighborhood, Mathabane grows up believing in voodoo magic and his father’s tribal religion, though he starts to have doubts about these beliefs by the time he is seven years old.

For months, Mathabane’s mother and Granny try to get him a birth certificate and all the proper paperwork so he can be registered for school. The overly-bureaucratic process takes nearly a year. However, Mathabane finally enrolls, and though he hates his first few days, gradually begins to grow fond of education and learning. In his first year, the principal recognizes him as the top-ranked student in his class of over 200. Although he continues to perform well academically, his family struggles to pay for his uniforms, books, and tuition, and his teachers beat him for not paying his fees. When Mathabane tries to get expelled by being truant for a month, the principal sends older boys to tie him up with rope and haul him back to school. His mother tells his teachers to beat him so badly that he is bed-ridden for an entire week.

When Mathabane is 10 years old, he witnesses a gruesome murder of an unarmed man. He starts to feel hopeless, that the world offers him no future as a black man. Mathabane tries to commit suicide, but his mother finds out before he carries it out. She helps Mathabane to realize how many people love and depend on him, like his younger siblings, and he decides to struggle on, rather than end his life.

Granny takes a gardening job for a white family named the Smiths, and Mrs. Smith starts giving Granny secondhand clothing and comic books for Mathabane. Mathabane goes with Granny to meet them one day, and though he is terrified of white people, discovers that Mrs. Smith is kind, though her son Clyde is terribly racist. Mrs. Smith starts giving Mathabane English literature and he falls in love with the stories, which rekindle his passion for learning and drives him to try to master English. When Mathabane is 13, Mrs. Smith gives him a tennis racket and introduces him to the sport. One day, a Coloured man named Scaramouche notices Mathabane practicing against the wall and thinks he shows promise. He decides to become Mathabane’s coach.

Mathabane loves tennis and finds a “surrogate father” in Scaramouche. Between his actual mother and father, Mathabane usually takes his mother’s side, although he detests her Christianity. His father hates that Mathabane spends all of his time on “white man’s education” and tennis, so he brings two men to try to kidnap Mathabane and send him to a tribal school in the mountains, but Mathabane threatens them with a knife and they leave him alone. Shortly after, Mathabane moves from primary school to secondary school and scores so well on his placement exam that the government gives him a scholarship to a good English-speaking school. His success brings honor and joy to his family. He leans into his study and practicing tennis, and meets a player who connects him with a tennis “ranch” owned by a white German liberal named Wilfred, who hates apartheid and offers to help Mathabane train. Wilfred helps him to excel, and just two years after picking up the sport, Mathabane wins his first tournament. He plays in additional tournaments and performs well.

Mathabane’s school starts requiring students to hold debates in Afrikaans, which all black students hate since it is the language of apartheid’s defenders. In 1976, the government declares that all Bantu schools must teach primarily in Afrikaans, rather than English, prompting widespread outrage. Ten thousand students hold a peaceful protest in Soweto, but white policemen open fire on the gathering, murdering hundreds of children and teenagers. Violence erupts, spreading not only across Soweto but also the ghettos in Alexandra and around the country. Schools shut down, and Mathabane spends all his time participating in protests and demonstrations. As police violence increases, the protests turn to angry and violent mobs, rioting and looting. “Anarchy reign[s] in the ghetto.” Mathabane is torn between recognizing the “senselessness” of the violence and “euphoria” at seeing black people take possessions and have supplemental food for the first time in their lives. After three months, the South African military suppresses the rebellion. Mathabane returns to Wilfred’s tennis ranch and shares what he’s seen with the white people there, who realize that their government suppressed most of the news about violence and riots.

Mathabane starts receiving anonymous death threats, warning him to stop associating with white people or playing tennis, which is considered a white sport. However, Mathabane becomes friends with Andre Zietsman, a white South African who has just returned from America. Andre tells Mathabane about the racial equality of American society, which makes Mathabane long to go there. Mathabane continues playing in higher level tournaments and enters the South African-hosted international tournament, the SAB Open. Though he quickly disqualifies, he meets American tennis legend Stan Smith, and quickly becomes friends with him and his wife, Marjory. Stan promises to try to line up tennis scholarships with American universities for Mathabane and gives him a large sum of money so that Mathabane can travel and continue competing in South African tennis tournaments. He plays in the national Sugar Circuit, though he doesn’t place well.

Mathabane finishes secondary school, and as months pass he anxiously awaits word from Stan about scholarships. He grows hopeless and desperate for a time, but takes a lucrative job for a bank to start helping his family. However, only a few months after he begins, Mathabane receives scholarship offers from a number of American universities and chooses a school in South Carolina. At the end of the story, he bids his family goodbye and drives to the airport, the first black person to escape South African apartheid on a tennis scholarship. 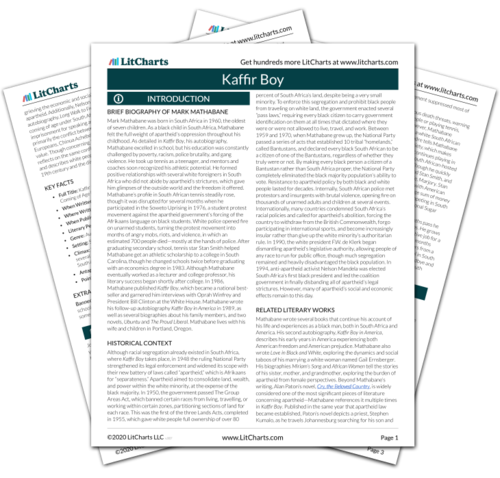 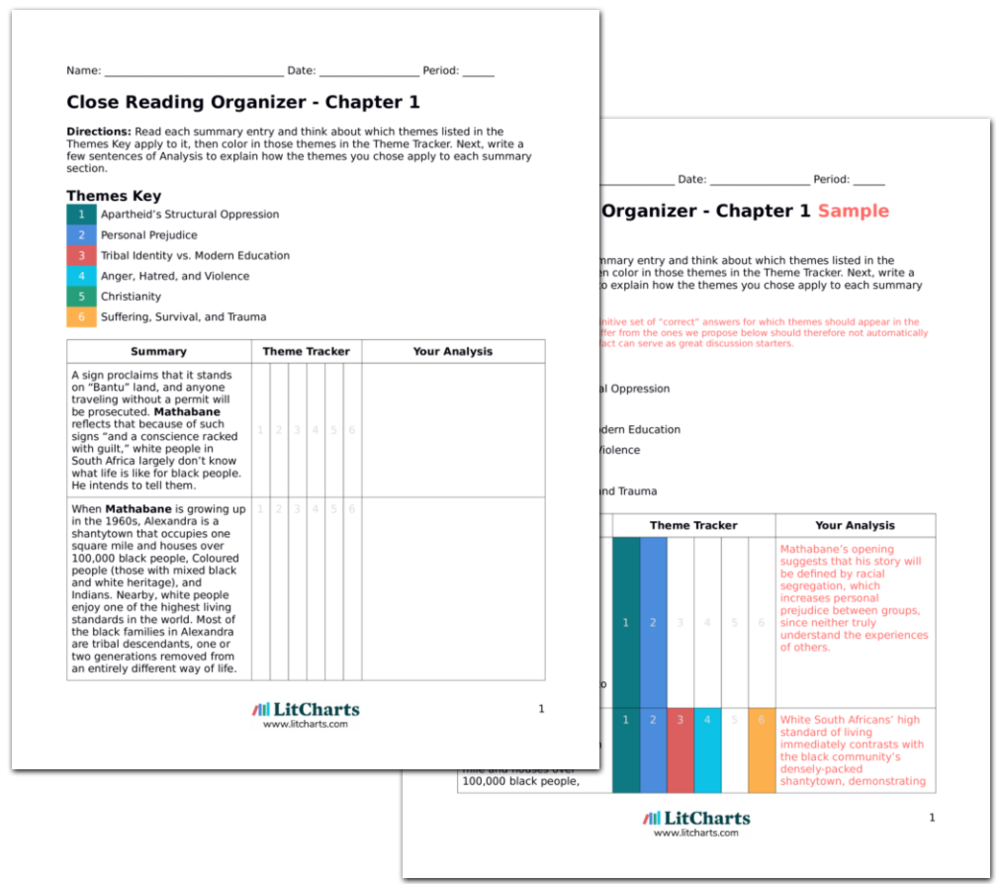