In Kitchen, light symbolizes joy or happiness. Every time Mikage Sakurai, the protagonist, experiences a person, place, or time when she feels warm and happy, Yoshimoto uses the symbol of light to represent Mikage’s joy. Yoshimoto establishes that light stands for joy by consistently describing Mikage’s moments of happiness as encounters with light that emanates from a character, a lamp, or the sky. Mikage always describes kitchens—which she loves, and feels happy in—by emphasizing the way the light falls in those spaces. Similarly, Mikage describes people who make her happy—typically, Eriko and Yuichi Tanabe—as “glowing” with light that draws her towards them. For example, Mikage says her love interest Yuichi “seemed to glow with white light.” Soon after, Mikage says Yuichi and his mother Eriko “shone like buddhas” when she reflects on her gratitude for finding a safe and supportive home with them. Similarly, when Mikage is able to see a glimmer of hope in a dark moment, she often imagines she sees something that lights up in the dark. For example, after crying in an alley over her grandmother’s death, Mikage looks up and sees light pouring out of a kitchen window from a building that’s near her. Mikage worries that her life will always be sad and painful because of her experiences with death and loneliness in her life. However, when Mikage accepts that suffering is necessary to understand joy, and that there is always a balance of both in life, she finds peace, which is symbolized by a dark space that’s dotted with light. For example, towards the end of the story, when Mikage accepts that she will be alright despite her suffering, she sees a lighthouse that casts its light beam over a dark ocean. Yoshimoto thus argues that nobody can run from darkness, because it will always be there, but they can infuse darkness with light, and that’s when they’ll find peace of mind.

The Kitchen quotes below all refer to the symbol of Light. For each quote, you can also see the other characters and themes related to it (each theme is indicated by its own dot and icon, like this one:

). Note: all page numbers and citation info for the quotes below refer to the Grove Press edition of Kitchen published in 2006.
Part 1: Kitchen Quotes

This was his mother? Dumbfounded I couldn’t take my eyes off her. Hair that rustled like silk to her shoulders; the deep sparkle of her long, narrow eyes; well-formed lips, a nose with a high, straight bridge—the whole of her face gave off a marvelous light that seemed to vibrate with life force.

Get the entire Kitchen LitChart as a printable PDF.
"My students can't get enough of your charts and their results have gone through the roof." -Graham S.
Download 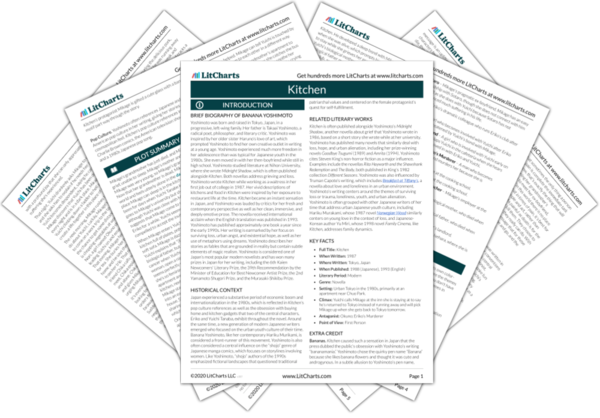 The timeline below shows where the symbol Light appears in Kitchen. The colored dots and icons indicate which themes are associated with that appearance.

...she’s bewitched. She hears a “spirit call [her] name.” Yuichi seems to “glow with white light” that draws her towards him. (full context)

...the middle of the kitchen. Yuichi makes tea while Mikage explores the kitchen, mesmerized by light bouncing off plates, sparkling glasses, appliances, and serving dishes of all sizes. Mikage usually feels... (full context)

...Yuichi’s mother. Eriko has silky hair, long legs, and sparkling eyes, and she radiates with light that “vibrate[s] with life force.” Eriko welcomes Mikage warmly, explains that she’ll be stuck at... (full context)

...feels like she can trust their kitchen, and she likes the way their faces shine light “like buddhas when they smiled.” (full context)

...kitchen. Outside the window, the rain has stopped, and the sky has filled with the light of twinkling stars. Somehow, Mikage doesn’t feel lonely, and her mind is eased from the... (full context)

Mikage wakes to the sound of Eriko bustling around cheerfully in the kitchen as light streams through the window and shines on the plant leaves. Eriko is hungry and Mikage... (full context)

...sleeping on the enormous sofa. She sleeps soundly each night, and wants for nothing more. “Light and air” starts to come back into Mikage’s heart, and she is grateful for finding... (full context)

...and she’s in a daze. The shift itself had been “agony.” Mikage thinks about the light-filled empty apartment, which no longer contains the smells of her life there, her warm bed,... (full context)

...her grandmother’s death, and also, somehow, over many things. Looking up, Mikage notices steam and light pouring out of a window in the dark, and hears voices, soup boiling, and pans... (full context)

...mumbling sleepily that he’s hungry and wants some ramen. As they sit under the kitchen light in the little room suspended in the dark night, Mikage suddenly thinks: “ramen! What a... (full context)

...experiencing hopelessness that a person can truly understand joy. Mikage is moved, and notices the light around Eriko’s “slender, graceful hands” forming a rainbow in the water she pours. Mikage thinks... (full context)

...dead. His sad, cheerful face radiates a “dim glow.” Outside the window, tiny points of light flicker through the dark. Yuichi reflects that he’s an orphan now, as tears stream down... (full context)

...dies. Mikage stares out of the window at the grey fog outside. Mikage misses the “light” that Eriko emitted, which has been replaced with a dark “heavy shadow of despair.” (full context)

...truly alive. Inching her way through the dark at the brink of despair, the moon’s light appears and a special kind of beauty permeates the heart.  (full context)

...alright. The feeling passes in a flash, and Mikage is confused. She’s dazzled by the light from his eyes. (full context)

...how Mikage was the same when grieving her grandmother. Mikage hopes that the glow of light surrounding them in the warm coffee shop warms his soul. (full context)

...Okuno too, and she suddenly becomes jealous. She feels like they are two streams of light floating towards a “critical juncture” in the dark. As they walk toward the station in... (full context)

Mikage recalls a bittersweet memory. Eriko was watering the plants, looking “thrillingly beautiful” in the light. She talked about the time when Yuichi’s biological mother was dying of cancer and wanted... (full context)

...her relationship with Yuichi and her grief about Eriko, who was the “dazzling sun” whose light illuminated them both. Mikage yearns for peace. Mikage wanders through the town in the evening,... (full context)

Spotting a light, Mikage enters a near-empty eatery with relief, and orders a hearty meal of fried pork... (full context)

...must be a matter of love, and Mikage smiles sheepishly. She dozes off under the light of the full moon, and wakes when they arrive, feeling more awake than her body.... (full context)

...dark windows. Somehow, she just knows that the window in the corner reflecting the green light is Yuichi’s. Mikage climbs up onto the ledge, and keeps climbing towards the window, until... (full context)

...spirits start to lift, and the “glittering crystal” of their warm and happy memories together lights up and she knows it will keep them going. She thinks about the swish of... (full context)

...beach. She’s freezing as she watches the dark, “jet black” waves glittering with dots of light from the lighthouse far away, which forms a path of light towards Mikage. She feels... (full context)
Previous
Symbols
Previous
Symbols
Next
Dark
Next
Dark
Get LitCharts 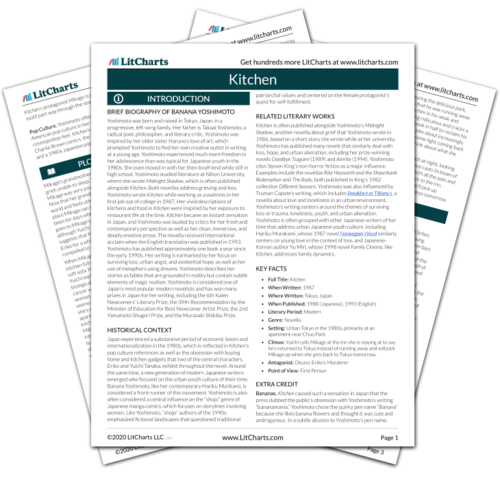 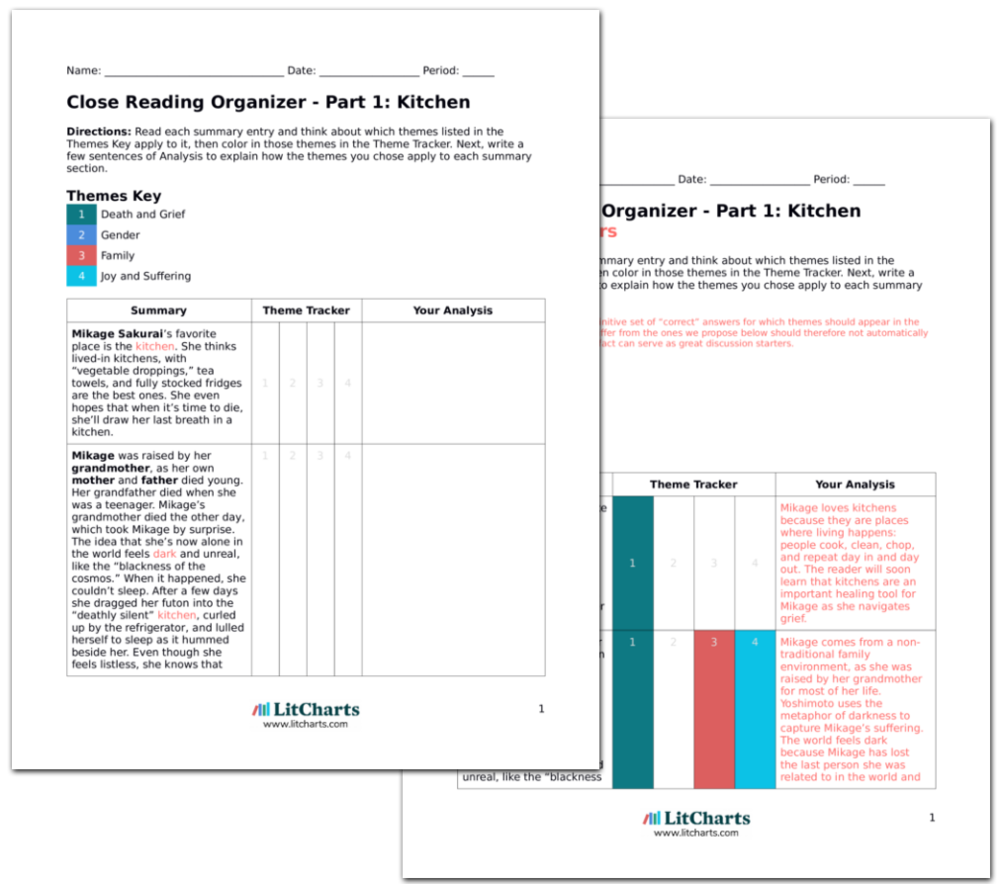