Get LitCharts A+
Mr. Harcourt Talboys is the father of George and Clara Talboys. Wealthy, judgmental, and prideful, Harcourt disowns George for marrying Lucy Maldon, a person of a lower class. He also refuses to help Robert Audley in his attempts to solve George’s disappearance. Harcourt represents a cold, apathetic form of justice that contrasts with the merciful justice exemplified by Robert. He also represents the rigidity and cruelty of certain members of the upper class, who, in trying to keep members of the lower class out of their bloodlines, end up losing the family they were attempting to preserve.

The Lady Audley’s Secret quotes below are all either spoken by Mr. Harcourt Talboys or refer to Mr. Harcourt Talboys. For each quote, you can also see the other characters and themes related to it (each theme is indicated by its own dot and icon, like this one:

). Note: all page numbers and citation info for the quotes below refer to the Oxford University Press edition of Lady Audley’s Secret published in 1987.
Volume 2, Chapter 4 Quotes

[Harcourt Talboys] was like his own square-built, northern-fronted, shelterless house. There were no shady nooks in his character into which one could creep for shelter from his hard daylight…with him right was right and wrong was wrong…He had cast off his only son because his only son had disobeyed him, and he was ready to cast off his only daughter at five minutes’ notice for the same reason.

Get the entire Lady Audley’s Secret LitChart as a printable PDF.
"My students can't get enough of your charts and their results have gone through the roof." -Graham S.
Download 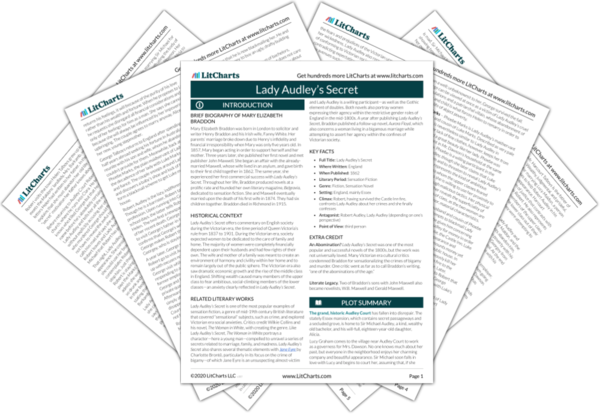 The timeline below shows where the character Mr. Harcourt Talboys appears in Lady Audley’s Secret. The colored dots and icons indicate which themes are associated with that appearance.

...used his daughter to ensnare a rich son-in-law. George comes from a rich family, but his own father cut him off once he married beneath his station. That estrangement, and the fact that... (full context)

In the trunk, Robert finds a letter from George’s father, Mr. Harcourt Talboys. Robert had written to Harcourt right after George’s disappearance, and Harcourt wrote back that... (full context)

...get. Eventually he orders Georgey a great feast. Robert decides he will soon leave for Harcourt Talboys’ house. Georgey talks of someone named Matilda, but before he can finish his story,... (full context)

Harcourt Talboys lives in a “prim, square, redbrick mansion.” Though he is a country squire, there... (full context)

Harcourt declared his son dead to him from the day of George’s marriage, and George knew... (full context)

Clara stands up to greet Robert, dropping her needlework. Harcourt tells her to sit down without even looking at her, as if he has eyes... (full context)

Robert tells Harcourt that he has evidence that George is dead, but he does not want to say... (full context)

...less than he grieves now. Robert states that he knows that George has been murdered. Harcourt accuses Robert of being either mad or commissioned by George to play a trick on... (full context)

Robert recounts the details of George’s disappearance. Neither Harcourt nor Clara show any emotion during his story, and Robert specifically leaves out the names... (full context)

...last time at Clara, whose expression has still not changed. Robert says that he hopes Harcourt is right about George being alive, but he suspects that Harcourt will one day regret... (full context)

...she loved her brother but knew she would not be successful in trying to sway her father’s mind. She thought if she waited, her father would eventually forgive George for marrying Helen. (full context)

Lady Audley resented George for leaving her in poverty, having to labor even though George’s father was rich. She didn’t love her son because he was only a burden to her.... (full context)

Clara returns to her home to tell Harcourt that George sailed for Australia on September 9th and will likely return one day to... (full context)

...Robert put in the Australian papers. He goes to the Talboys’ mansion to talk to Harcourt about his son. Harcourt laments Robert’s smuggling of Lady Audley out of England, because Harcourt... (full context)

...is delighted to be there because he gets to take walks with Clara (chaperoned by Mr. Talboys , of course). They talk of George. Robert thinks how he has developed from hating... (full context)

...his love to Clara, so after five weeks at the mansion, he announces his departure. Harcourt says he enjoyed Robert’s visit and welcomes Robert back any time. Robert notices Clara drooping... (full context) 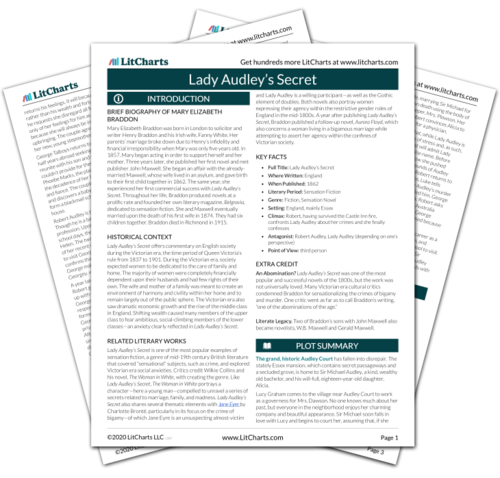 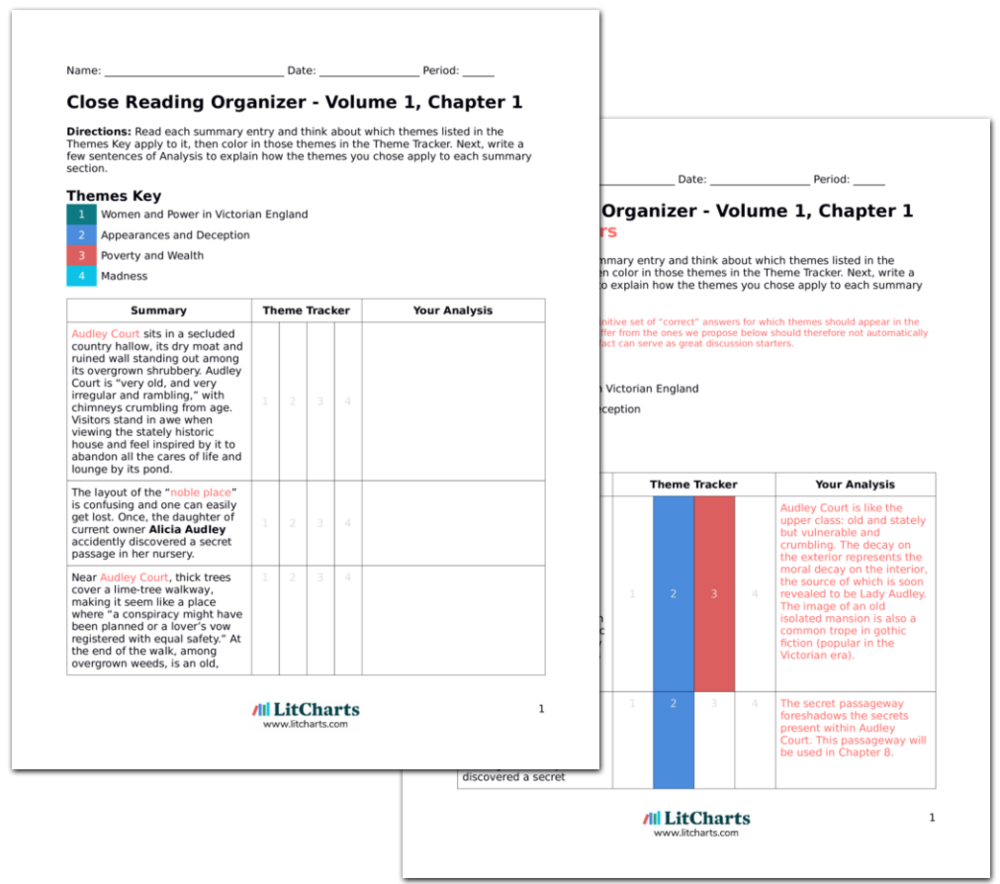