Download this LitChart! (PDF)
Teachers and parents! Struggling with distance learning? Our Teacher Edition on Lady Susan can help.

Welcome to the LitCharts study guide on Jane Austen's Lady Susan. Created by the original team behind SparkNotes, LitCharts are the world's best literature guides.

A concise biography of Jane Austen plus historical and literary context for Lady Susan.

A quick-reference summary: Lady Susan on a single page.

In-depth summary and analysis of every letter of Lady Susan. Visual theme-tracking, too.

Explanations of Lady Susan's symbols, and tracking of where they appear.

An interactive data visualization of Lady Susan's plot and themes.

Jane Austen was the seventh child of a British parish rector. Though her parents were members of the English gentry, they remained relatively poor. Modest to a fault about the value of her work, Jane Austen nevertheless produced some of the enduring masterpieces of English literature, including the novels Pride and Prejudice, Sense and Sensibility, Emma, and Persuasion. Her novels were published anonymously until after her death, when her authorship became known. While it was not unheard of for women to publish under their own names in Austen's lifetime, it was still a rarity. Despite the fact that her books focus on the intricate rituals of courtship and marriage among the British middle class, Austen herself remained single throughout her life, preferring the life of a writer over that of a wife and hostess.
Get the entire Lady Susan LitChart as a printable PDF.
"My students can't get enough of your charts and their results have gone through the roof." -Graham S.
Download 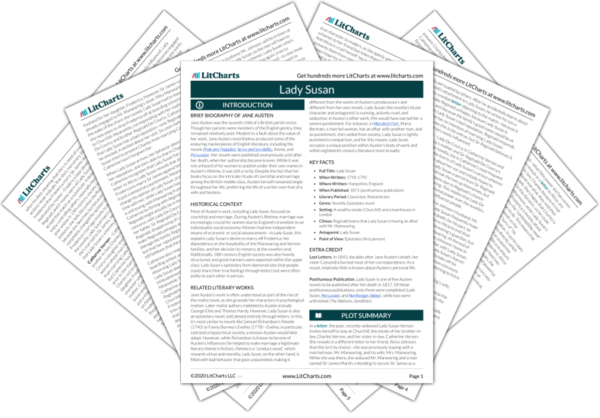 Most of Austen’s work, including Lady Susan, focused on courtship and marriage. During Austen’s lifetime, marriage was increasingly crucial for women due to England’s transition to an individualist social economy. Women had few independent means of economic or social advancement—in Lady Susan, this explains Lady Susan’s desire to marry off Frederica, her dependence on the hospitality of the Mainwaring and Vernon families, and her decision to remarry at the novella’s end. Additionally, 18th century English society was also heavily structured, and good manners were expected within the upper class. Lady Susan’s epistolary form demonstrates that people could share their true feelings through letters but were often polite to each other in person.

Other Books Related to Lady Susan

Jane Austen’s work is often understood as part of the rise of the realist novel, as she grounds her characters in psychological realism. Later realist authors indebted to Austen include George Eliot and Thomas Hardy. However, Lady Susan is also an epistolary novel, told almost entirely through letters. In this, it’s most similar to novels like Samuel Richardson’s Pamela (1740) or Fanny Burney’s Evelina (1778)—Evelina, in particular, satirized a hypocritical society, a mission Austen would later adopt. However, while Richardson is known to be one of Austen’s influences (he helped to make marriage a legitimate literary theme in fiction), Pamela is a “conduct novel,” which rewards virtue and morality. Lady Susan, on the other hand, is filled with bad behavior that goes unpunished, making it different from the works of Austen’s predecessors and different from her own novels. Lady Susan (the novella’s titular character and antagonist) is cunning, actively cruel, and seductive; in Austen’s other work, this would have earned her a severe punishment. For instance, in Mansfield Park, Maria Bertram, a married woman, has an affair with another man, and as punishment, she’s exiled from society. Lady Susan is lightly punished in comparison, and for this reason, Lady Susan occupies a unique position within Austen’s body of work and within eighteenth-century literature more broadly.
Key Facts about Lady Susan

Lost Letters. In 1843, decades after Jane Austen’s death, her sister Cassandra burned most of her correspondence. As a result, relatively little is known about Austen’s personal life.

Posthumous Publication. Lady Susan is one of five Austen novels to be published after her death in 1817. Of these posthumous publications, only three were completed (Lady Susan, Persuasion, and Northanger Abbey), while two were unfinished (The Watsons, Sandition). 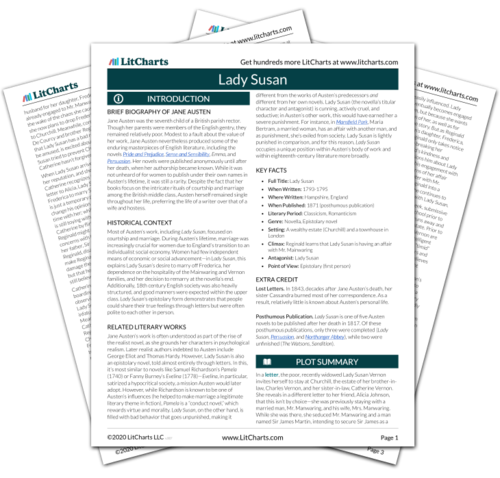 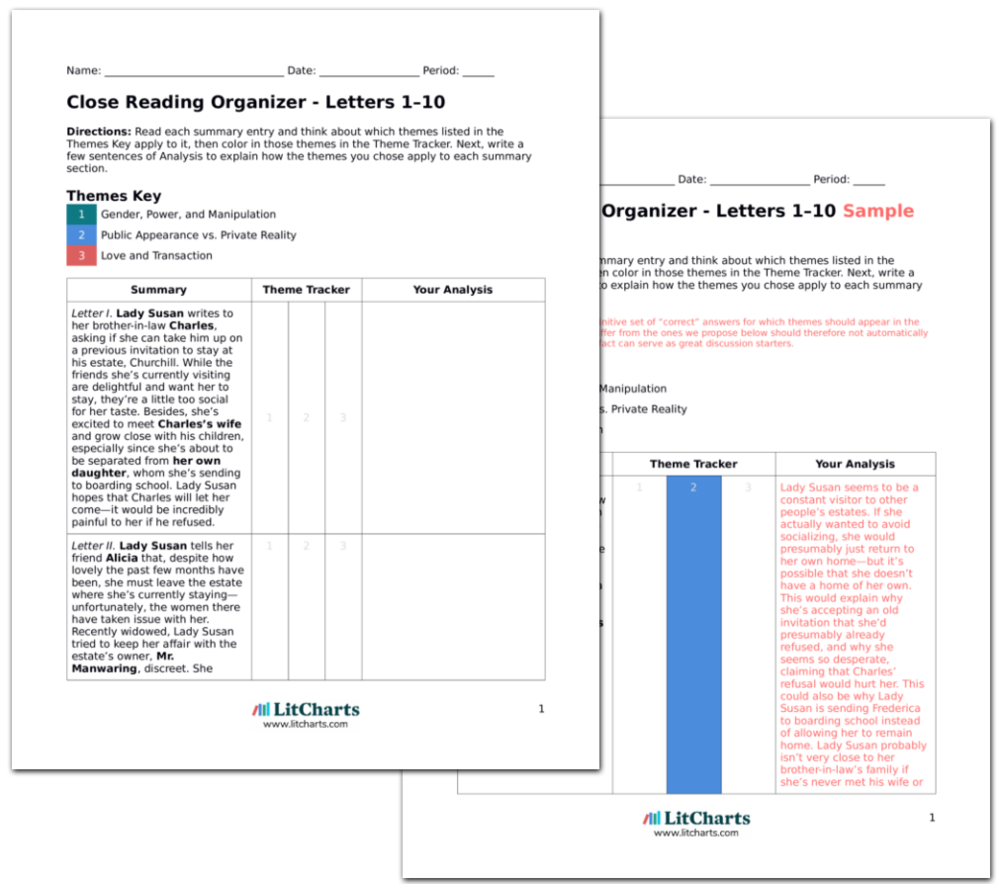