The play’s most prominent symbol, Lady Windermere’s fan represents the performative nature of femininity. Traditionally, respectable young women like Lady Windermere would have used beautiful fans like this one both as fashionable accessories and as ways to hide their faces in social situations, thus appearing more ladylike. At the start of the play, Lady Windermere uses her fan in this conventional way; it’s simply an appealing gift from her husband, Lord Windermere. However, the fan’s meaning changes when Lady Windermere threatens to hit Mrs. Erlynne with it; at this moment, Lady Windermere shows that performances of femininity can actually be violent and dangerous. The fan continues to highlight both the pitfalls and the benefits associated with attempting to be a respectable woman. On the one hand, the fan is nearly Lady Windermere’s downfall in Lord Darlington’s apartment, but on the other hand, both she and Mrs. Erlynne go on to use it as a tool to manipulate men for their own gain. For example, Mrs. Erlynne wins Augustus’s affection back in part by asking him to carry the fan. At the end of the play, Lady Windermere gives the fan to Mrs. Erlynne, and the gift acts as a symbol of their ongoing bond, suggesting that dealing together with the strictures of society is one way in which women learn to gain strength from each other. It’s also significant that the fan bears their shared name, Margaret; this fact underscores how their identities are both tied to their performances of womanhood.

). Note: all page numbers and citation info for the quotes below refer to the Oxford University Press edition of Lady Windermere’s Fan published in 2008.
Act I Quotes

LADY WINDERMERE: There is not a good woman in London who would not applaud me. We have been too lax. We must make an example, I propose to begin tonight. (Picking up fan) Yes, you gave me this fan today; it was your birthday present. If that woman crosses my threshold, I shall strike her across the face with it. (Rings bell)

LADY WINDERMERE: (C.) London is full of women who trust their husbands. One can always recognize them. They look so thoroughly unhappy. I am not going to be one of them. (Moves up) Lord Darlington, will you give me back my fan, please? Thanks…A useful thing a fan, isn’t it?…I want a friend tonight, Lord Darlington: I didn’t know I would want one so soon.

LADY WINDERMERE: […] Perhaps she told them the true reason of her being there, and the real meaning of that—fatal fan of mine. Oh, if he knows—how can I look him in the face again? He would never forgive me. (Touches bell) How securely one thinks one lives—out of reach of temptation, sin, folly. And then suddenly—Oh! Life is terrible. It rules us, we do not rule it.

Unlock with LitCharts A+
Get the entire Lady Windermere’s Fan LitChart as a printable PDF.
"My students can't get enough of your charts and their results have gone through the roof." -Graham S.
Download 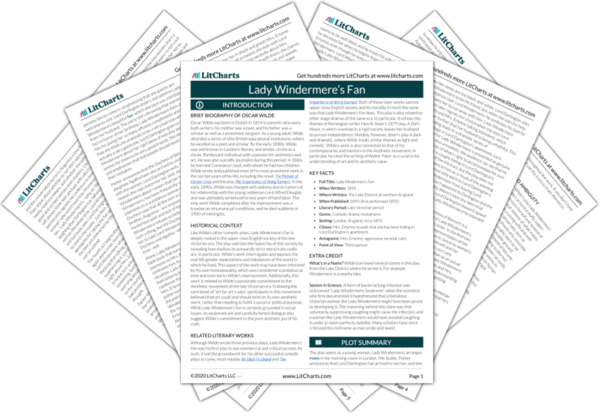 Lord Darlington enters and tells Lady Windermere how beautiful her fan is. She thanks him and says that it was a birthday present from her husband,... (full context)

...to the party, she will insult her and hit her across the face with the fan. Lord Windermere begs her not to, but she ignores him and calls Parker in. Lady... (full context)

...she refuses to reconsider her intention to humiliate Mrs. Erlynne. She moves away, taking her fan from Lord Darlington, who has been holding it for her. She remarks that she thinks... (full context)

Cecil catches sight of Lady Windermere’s fan lying on the sofa and slyly asks Lord Darlington if he is faithful to the... (full context)

Lord Windermere recognizes the fan as Lady Windermere’s right away. Furious, he demands an explanation from Lord Darlington, who denies... (full context)

...did not come home until five o’clock, and that he said something about Lady Windermere’s fan. After Rosalie leaves, Lady Windermere reflects on Mrs. Erlynne’s selfless actions, saying that there is... (full context)

Mrs. Erlynne apologizes for accidentally taking the fan the night before and says also that she wants to say goodbye before leaving town.... (full context)

...man. Disgusted, Lord Windermere says that he won’t ever be able to look at the fan again after the events in Lord Darlington’s rooms, and Mrs. Erlynne says she’ll ask Lady... (full context)

...her that the night is over now. In parting, Mrs. Erlynne asks to keep the fan and Lady Windermere happily agrees, noting how fortunate it is that they have the same... (full context)