Much of “Lamb to the Slaughter” is occupied with eating and food. At the beginning of the story, food is closely linked to domesticity and marriage. Mary’s repeated attempts to feed Patrick demonstrate not only her affection for her husband but also the role she plays as homemaker and housewife. Similarly, Patrick’s refusal to eat Mary’s food is a rejection of that affection and foreshadows his rejection of the domestic life Mary has built around him. Even after Patrick’s death, food still is (or appears to be) associated with marriage, as Mary attempts to maintain the façade of domestic bliss by establishing her alibi of buying Patrick’s food from Sam, the local grocer.

After Patrick tells Mary he is leaving her, food becomes a literal and figurative weapon. In the literal sense, food is weaponized when Mary kills her husband with a frozen leg of lamb, which is said by the narrator to be as effective as a “steel club.” Metaphorically, food also works against the other policemen, as they never suspect that Mary’s frozen meat could be used as a weapon, and they begin to eat the evidence for which they have been searching all night.

Just as the weaponization of food is both literal and metaphorical, so too is the motif of consumption. Mary, a happy housewife, is consumed with her marriage and her husband’s masculinity, and thus her role within a male-dominated culture. Obsessed with domestic bliss, her entire life revolves around her husband. Patrick, on the other hand, is consumed with his work. Though he is always tired because of his work as a detective, he values his job more than he does his wife. After Patrick’s death, this consumption becomes literal and possibly cannibalistic for the detectives, who eat the murder weapon. As the detectives’ “thick and sloppy” mouths wolf down the leg of lamb, the men fail to realize that it had been bashed into Patrick’s skull and may even contain his blood. Whereas Patrick Maloney was once consumed with his work, now he is consumed by his work, or rather by his former friends and colleagues on the police force. Like the men’s suspicion that the weapon is “right under our very noses,” this is another example of the story’s ironic black humor.

The ThemeTracker below shows where, and to what degree, the theme of Food/Consumption appears in each chapter of Lamb to the Slaughter. Click or tap on any chapter to read its Summary & Analysis.
How often theme appears:
chapter length:
Chapter
Lamb to the Slaug...
Get the entire Lamb to the Slaughter LitChart as a printable PDF.
"My students can't get enough of your charts and their results have gone through the roof." -Graham S.
Download 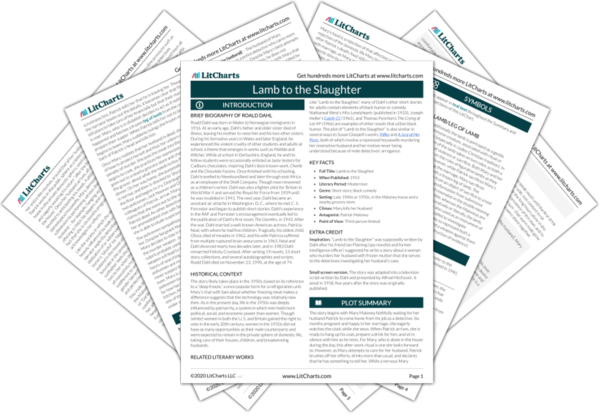 Food/Consumption Quotes in Lamb to the Slaughter