The novel that Alice wants to write—and eventually does write—serves as a symbol of the complex reality of being a creative woman. At first, Fay discourages Alice from working on the novel, telling her that she is too young and has not read enough to write well. Fay also disparages the novel’s content, which she thinks is dull and trite because it is based on Alice’s own romantic affairs. However, as the book continues, Fay grows more encouraging of Alice’s efforts even though Alice is still reluctant to read the books Fay wants her to. Fay’s shifting perspective, which seems to change almost at random in some cases, illustrates the complication of writing as a woman about stereotypically feminine events. On the one hand, Fay is tempted to dismiss Alice’s novel because of its seeming inanity, much as readers sometimes dismiss Jane Austen’s work. On the other hand, Fay values the novel for its reflection of Alice’s reality and celebrates Alice’s ability to define her own life through creative work. Though ultimately very successful, the novel does not solve all of Alice’s problems, leaving Alice to continue sorting through the same questions of creative identity that Jane Austen faced in her own time.

The Letters to Alice on First Reading Jane Austen quotes below all refer to the symbol of Alice’s Novel. For each quote, you can also see the other characters and themes related to it (each theme is indicated by its own dot and icon, like this one:

). Note: all page numbers and citation info for the quotes below refer to the Carroll & Graf edition of Letters to Alice on First Reading Jane Austen published in 1984.
Letter 14 Quotes

Alice, we will, as they say, be a long time dead. You must carve your living self as sharply into the Rock of Eternity as you can. Please send your novel off; don’t do as you threaten and forget it. Of course it’s more than likely to be rejected and come back, and of course you will then feel rejected and discovered in your presumption. But if you embark on these things, you can’t draw back.

Get the entire Letters to Alice LitChart as a printable PDF.
"My students can't get enough of your charts and their results have gone through the roof." -Graham S.
Download 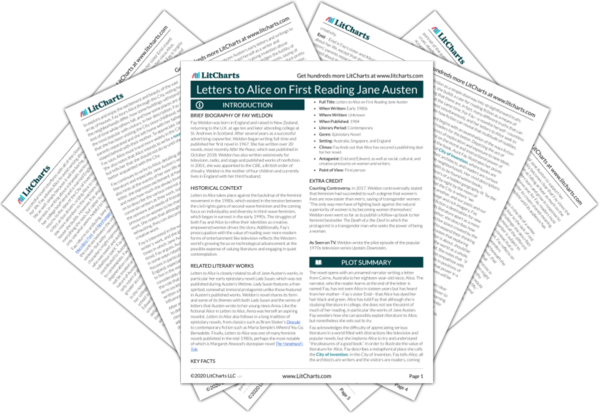 The timeline below shows where the symbol Alice’s Novel appears in Letters to Alice on First Reading Jane Austen. The colored dots and icons indicate which themes are associated with that appearance.

...of modern society. Fay concludes by addressing Alice’s claim that she plans to write a novel soon. She tells Alice that she should not write a novel until she has gained... (full context)

Fay turns to the subject of Alice’s novel, about which Alice has asked for advice. Fay advises her to offer her reader “moral... (full context)

...the next day and assures Enid that she is not encouraging Alice to write a novel but only helping her understand Jane Austen. (full context)

On the subject of Alice’s novel, Fay warns Alice that she might find it hard to finish it, because on a... (full context)

...writer that may become unique strengths. Then, she tells Alice that the plot of Alice’s novel sounds “perfectly dreadful,” but reminds her that the plot of Pride and Prejudice sounds dreadful... (full context)

Fay summarizes Alice’s novel, which is about a young woman who falls in love with her English professor. Fay... (full context)

Noting that Alice must be busy continuing her own novel, Fay summarizes the plot of Northanger Abbey for her, detailing Catherine’s success in marrying her... (full context)

...even if they bore her today. She also recommends that Alice continue with her own novel, “to counteract the danger of too much analysis.” Finally, Fay tells Alice that many people... (full context)

...urges Alice to make a lasting impression while she is alive, and to send her novel out for publication even though she fears rejection. (full context)

...and gratifying news” and gives her advice about how to negotiate the terms of her novel with her new publisher. She expresses how excited to she is to hear about Alice’s... (full context) 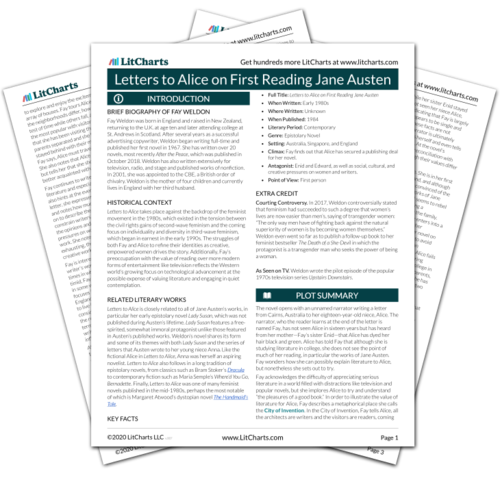 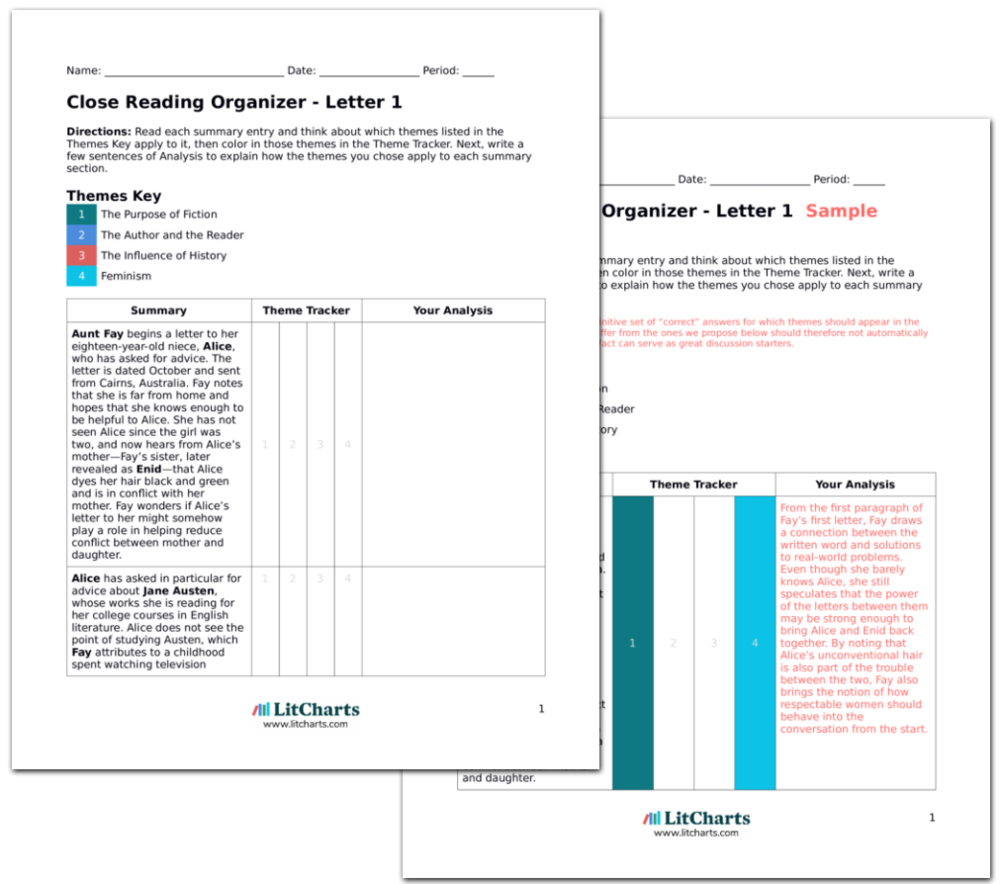