Download this LitChart! (PDF)
Teachers and parents! Struggling with distance learning? Our Teacher Edition on Leviathan can help.

Welcome to the LitCharts study guide on Thomas Hobbes's Leviathan. Created by the original team behind SparkNotes, LitCharts are the world's best literature guides.

A concise biography of Thomas Hobbes plus historical and literary context for Leviathan.

A quick-reference summary: Leviathan on a single page.

In-depth summary and analysis of every chapter of Leviathan. Visual theme-tracking, too.

Explanations of Leviathan's symbols, and tracking of where they appear.

An interactive data visualization of Leviathan's plot and themes.

Thomas Hobbes was born in 1588 in Westport, a village near the town of Malmesbury in Wiltshire, England. Hobbes had an older brother and a sister, and his father, an uneducated vicar, did not value education for his children. When Hobbes was a child, his father left Westport after some sort of dispute, and Hobbes spent the remainder of his childhood with his father’s brother, Francis, a successful local manufacturer. Hobbes was educated in both private and public schools, and he attended Hertford College, Oxford, where he studied logic and physics. Hobbes also studied at the University of Oxford; however, he left before completing his degree and later obtained a BA in 1608 from St. John’s College, Cambridge. After completing school, Hobbes worked as a private tutor to the future Earl of Devonshire, and he traveled Europe under the family’s employment from 1610 to 1615. After this time, Hobbes again found work as a tutor in both London and in Paris and had many prominent students, including the 3rd Earl of Devonshire and Charles II, the future King of England. Around 1640, Hobbes turned his attention to philosophy, and he circulated a pamphlet, The Elements of Law, Natural and Politic, which proposed many of the ideas that would later become Leviathan. During the English Civil War (1642–1651), anti-Royalist sentiments began to rise in England, and Hobbes, a well-known Royalist, was forced to flee to Paris. During this time, Hobbes began to prolifically write philosophy, including the Latin Elementorum Philosophiae Sectio Teria de Cive (“Philosophical rudiments concerning government and society”) in 1642 and Of Liberty and Necessity in 1646. In 1651, Hobbes published Leviathan, and when he returned to London that same year after the end of the English Civil War, he was one of the most infamous intellectuals of the time. In 1660, at the end of the Interregnum, Charles II became King of England and awarded Hobbes a yearly pension of 100 pounds. In 1666, Hobbes was accused of atheism and blasphemy by the House of Commons (the lower house of Parliament) because of the ideas expressed in Leviathan, and he was banned from further publishing in England. Following this order, Hobbes took to publishing his books in Amsterdam, including English translations of Homer’s Odyssey and Iliad and a Latin translation of Leviathan. In 1679, Hobbes suffered a massive stroke after falling ill with a bladder infection, and he died soon after at 91 years old.
Get the entire Leviathan LitChart as a printable PDF.
"My students can't get enough of your charts and their results have gone through the roof." -Graham S.
Download 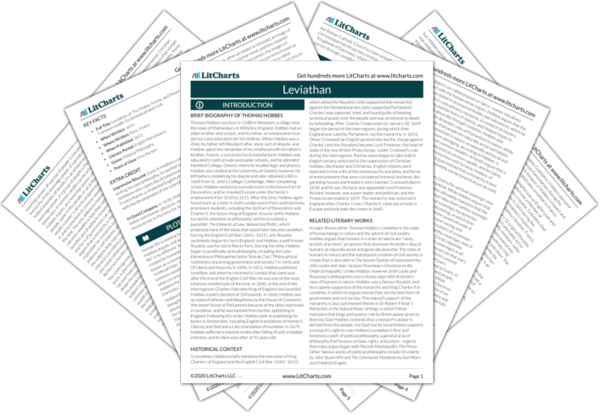 In Leviathan, Hobbes briefly mentions the execution of King Charles I of England and the English Civil War (1642–1651), which pitted the Royalists (who supported the monarchy) against the Parliamentarians (who supported Parliament). Charles I was captured, tried, and found guilty of keeping tyrannical power over the people and was sentenced to death by beheading. After Charles I’s execution on January 30, 1649 began the period of the Interregnum, during which time England was ruled by Parliament, not the monarchy. In 1653, Oliver Cromwell (an English general who led the charge against Charles I and the Royalists) became Lord Protector, the head of state of the new British Protectorate. Under Cromwell’s rule during the Interregnum, Puritan views began to take hold in English society, which led to the suppression of Christian holidays, like Easter and Christmas. English citizens were expected to live a life of the utmost purity and piety, and forms of entertainment that were considered immoral and lewd, like gambling houses and theaters, were banned. Cromwell died in 1658, and his son, Richard, was appointed Lord Protector. Richard, however, was a poor leader and politician, and the Protectorate ended in 1659. The monarchy was restored in England when Charles I’s son, Charles II, came out of exile in Europe and took back the crown in 1660.

Other Books Related to Leviathan

A major theme within Thomas Hobbes’s Leviathan is the state of human beings in nature and the advent of civil society. Hobbes argues that humans in a state of nature are “nasty, brutish, and short,” an opinion that dismisses Aristotle’s idea of humans as naturally social and generally peaceful. The state of humans in nature and the subsequent creation of civil society is a topic that is also seen in The Second Treatise of Government by John Locke and Jean-Jacques Rousseau’s Discourse on the Origin of Inequality. Unlike Hobbes, however, both Locke and Rousseau’s philosophies more closely align with Aristotle’s view of humans in nature. Hobbes was a famous Royalist, and he is openly supportive of the monarchy and King Charles II in Leviathan, in which he argues monarchies are the best form of government and civil society. This staunch support of the monarchy is also a prominent theme in Sir Robert Filmer’s Patriarcha, or the Natural Power of Kings, in which Filmer maintains that kings and queens rule by divine power given to them by God. Hobbes contends that a monarch’s power is derived from the people, not God, but he nevertheless supports a monarch’s right to rule. Hobbes’s Leviathan is first and foremost a work of political philosophy, a general area of philosophy that focuses on laws, rights, and justice—a genre that many argue began with Niccolò Machiavelli’s The Prince. Other famous works of political philosophy include On Liberty by John Stuart Mill and The Communist Manifesto by Karl Marx and Friedrich Engels.
Key Facts about Leviathan

Impressive Résumé. Early in Hobbes’s career, before he began writing his own philosophy, he worked as an amanuensis (someone who copies the dictated words of another) for Francis Bacon, a respected English philosopher who is credited with the development of the scientific method.

In Good Company. In 1636, Hobbes met Galileo Galilei, an Italian astronomer, physicist, and philosopher who was under house arrest in Florence for heresy during the Holy Inquisition. 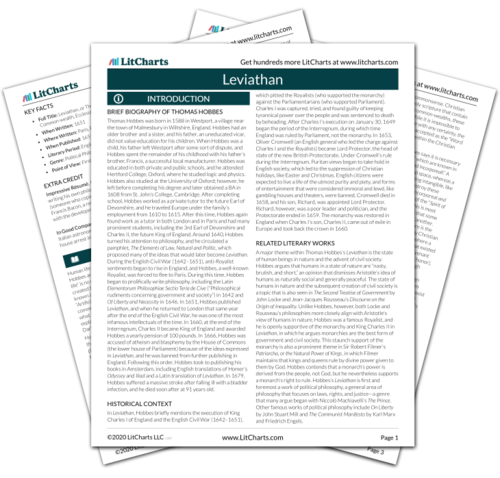 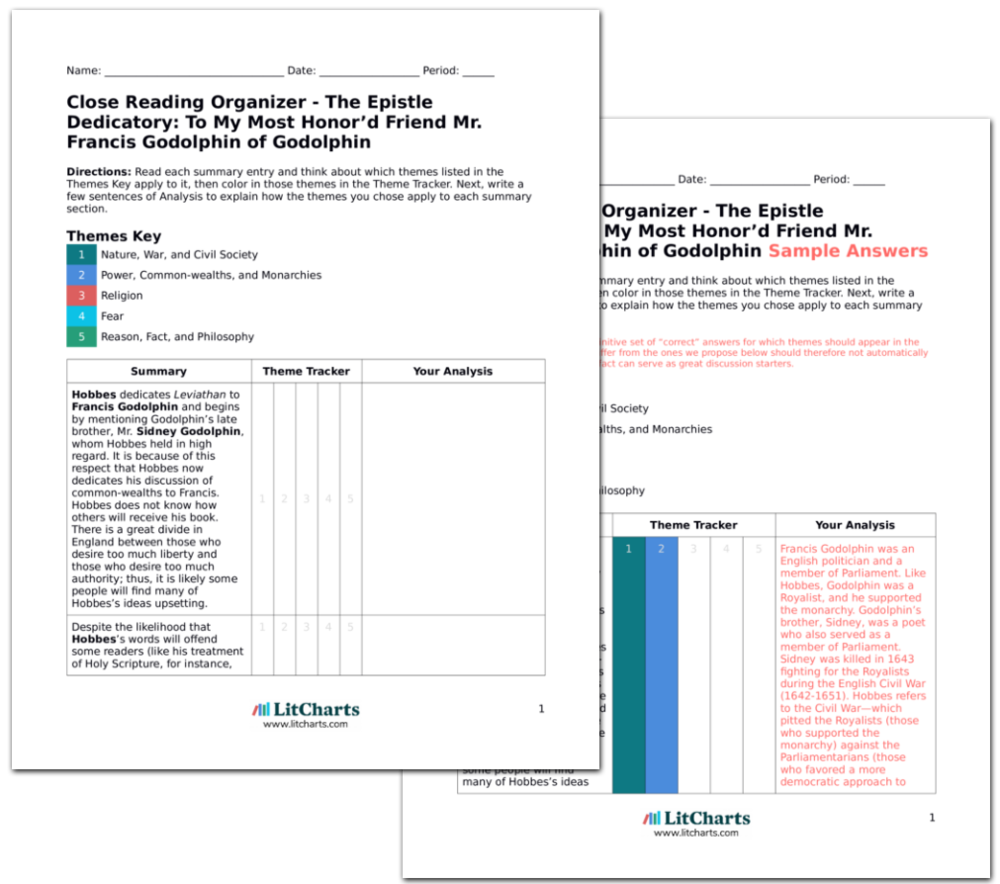