There aren’t many symbols in Lies My Teacher Told Me, since it’s a work of nonfiction (and, in a way, a work of meta-nonfiction, or nonfiction about nonfiction). One exception to this rule is the first Thanksgiving, as Loewen describes it in Chapter 3. Most history textbooks treat the New England pilgrims’ first Thanksgiving, during which they (supposedly) invited the local Native Americans to dine with them, as a literal historical event. Loewen argues that the first Thanksgiving was, in fact, nothing of the kind: it was a myth, invented by the pilgrims and their descendants to justify the European settlers’ expansion into North America. Loewen argues that the first Thanksgiving is meant to symbolize the unequal exchange between European settlers and Native Americans—the Europeans invited the natives to their meal, not the other way around. In a broader sense, the first Thanksgiving is an apt symbol for the way that history textbooks distort the facts to create a comforting, ethnocentric myth.

The First Thanksgiving Quotes in Lies My Teacher Told Me

The Lies My Teacher Told Me quotes below all refer to the symbol of The First Thanksgiving. For each quote, you can also see the other characters and themes related to it (each theme is indicated by its own dot and icon, like this one:

). Note: all page numbers and citation info for the quotes below refer to the Touchstone edition of Lies My Teacher Told Me published in 2007.
Chapter 3 Quotes

The archetypes associated with Thanksgiving—God on our side, civilization wrested from wilderness, order from disorder, through hard work and good Pilgrim character—continue to radiate from our history textbooks.

Get the entire Lies My Teacher Told Me LitChart as a printable PDF.
"My students can't get enough of your charts and their results have gone through the roof." -Graham S.
Download 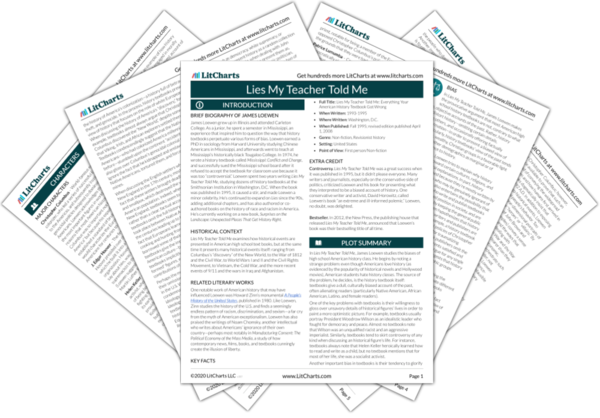 The First Thanksgiving Symbol Timeline in Lies My Teacher Told Me

The timeline below shows where the symbol The First Thanksgiving appears in Lies My Teacher Told Me. The colored dots and icons indicate which themes are associated with that appearance.

...settled in Holland, followed by North America, where they befriended the Native Americans and celebrated Thanksgiving together. Most students know nothing about the diseases that English fishermen brought with them from... (full context)

The “Thanksgiving myth” is highly condescending, if not overtly racist, toward Native Americans. Schoolchildren are taught that... (full context) 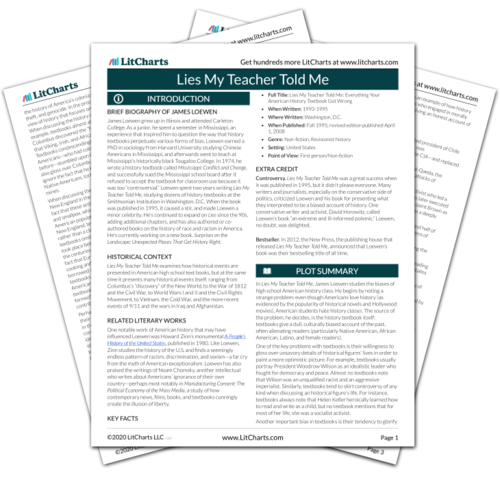