Download this LitChart! (PDF)
Teachers and parents! Struggling with distance learning? Our Teacher Edition on Light in August can help.

Welcome to the LitCharts study guide on William Faulkner's Light in August. Created by the original team behind SparkNotes, LitCharts are the world's best literature guides.

A concise biography of William Faulkner plus historical and literary context for Light in August.

A quick-reference summary: Light in August on a single page.

In-depth summary and analysis of every chapter of Light in August. Visual theme-tracking, too.

Explanations, analysis, and visualizations of Light in August's themes.

Description, analysis, and timelines for Light in August's characters.

Explanations of Light in August's symbols, and tracking of where they appear.

An interactive data visualization of Light in August's plot and themes.

William Faulkner was one of four brothers who grew up in Oxford, Mississippi. He received a thorough education at home from both his mother and his nanny, Canny Barr, and was an excellent student at school. He was named after his grandfather, a Civil War hero named William Clark Falkner. (Indeed, Faulkner was actually born “Falkner,” but changed his name after a typesetter misspelled it and Faulkner decided to go along with it.) Faulkner began writing in his teens, although he at first found it difficult to get his work published. He attended the University of Mississippi but did not do well and dropped out after three semesters. He moved to New Orleans and published his first novel, Soldier’s Pay, in 1926. He married Estelle Oldham in 1929, the same year he began writing one of his most famous works, As I Lay Dying. Faulkner’s success as a writer was mixed during his lifetime. Although he achieved much acclaim and won the Nobel Prize in Literature, some publishers and critics were hostile to his experimental style, and he struggled to maintain financial security. He suffered from alcoholism, and died at the age of 64 following a heart attack.
Get the entire Light in August LitChart as a printable PDF.
"My students can't get enough of your charts and their results have gone through the roof." -Graham S.
Download 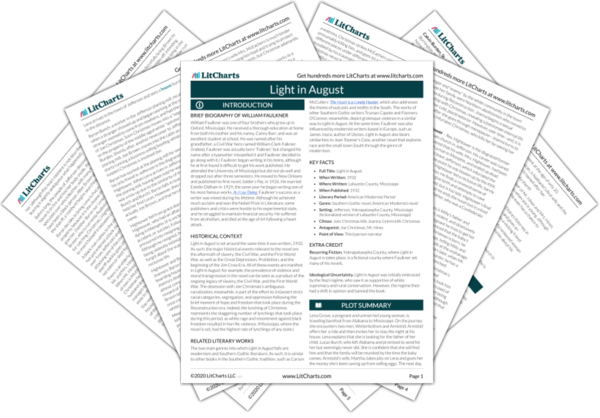 Historical Context of Light in August

Light in August is set around the same time it was written, 1932. As such, the major historical events relevant to the novel are the aftermath of slavery, the Civil War, and the First World War, as well as the Great Depression, Prohibition, and the beginning of the Jim Crow Era. All of these events are manifest in Light in August; for example, the prevalence of violence and moral transgression in the novel can be seen as a product of the ongoing legacy of slavery, the Civil War, and the First World War. The obsession with Joe Christmas’s ambiguous racialization, meanwhile, is part of the effort to (re)assert strict racial categories, segregation, and oppression following the brief moment of hope and freedom that took place during the Reconstruction era. Indeed, the lynching of Christmas represents the staggering number of lynchings that took place during this period, as white rage and resentment against black freedom resulted in horrific violence. (Mississippi, where the novel is set, had the highest rate of lynchings of any state.)

Other Books Related to Light in August

The two main genres into which Light in August falls are modernism and Southern Gothic literature. As such, it is similar to other books in the Southern Gothic tradition, such as Carson McCullers’ The Heart is a Lonely Hunter, which also addresses the theme of outcasts and misfits in the South. The works of other Southern Gothic writers Truman Capote and Flannery O’Connor, meanwhile, depict grotesque violence in a similar way to Light in August. At the same time, Faulkner was also influenced by modernist writers based in Europe, such as James Joyce, author of Ulysses. Light in August also bears similarities to Jean Toomer’s Cane, another novel that explores race and the small-town South through the genre of modernism.
Key Facts about Light in August

Extra Credit for Light in August

Recurring Fiction. Yoknapatawpha County, where Light in August is takes place, is a fictional county where Faulkner set many of his novels.

Ideological Uncertainty. Light in August was initially embraced by the Nazi regime, who saw it as supportive of white supremacy and rural conservatism. However, the regime then had a shift in opinion and banned the book. 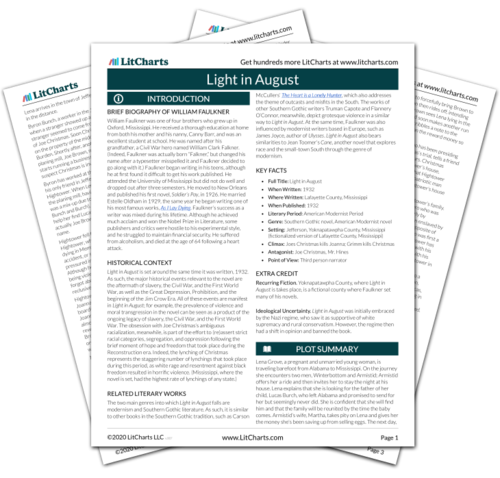 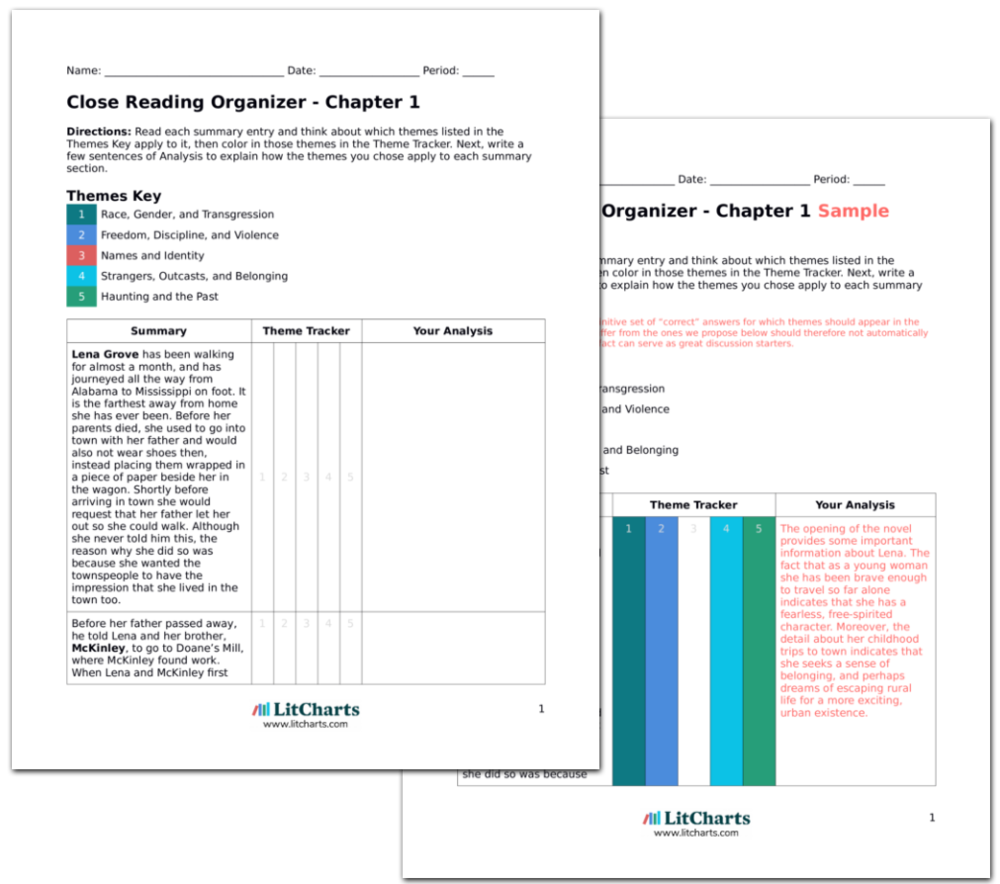