Download this LitChart! (PDF)
Teachers and parents! Struggling with distance learning? Our Teacher Edition on Like a Winding Sheet can help.

Welcome to the LitCharts study guide on Ann Petry's Like a Winding Sheet. Created by the original team behind SparkNotes, LitCharts are the world's best literature guides.

A concise biography of Ann Petry plus historical and literary context for Like a Winding Sheet.

A quick-reference summary: Like a Winding Sheet on a single page.

In-depth summary and analysis of every of Like a Winding Sheet. Visual theme-tracking, too.

Explanations, analysis, and visualizations of Like a Winding Sheet's themes.

Like a Winding Sheet's important quotes, sortable by theme, character, or .

Description, analysis, and timelines for Like a Winding Sheet's characters.

Explanations of Like a Winding Sheet's symbols, and tracking of where they appear.

An interactive data visualization of Like a Winding Sheet's plot and themes.

Born into a middle-class African American family in a predominantly white community, Petry developed into one of the foremost female writers on the subject of race in mid-twentieth century America. The daughter of a pharmacist, Petry attended Connecticut College of Pharmacy in her twenties and worked in the family drugstore for a number of years, while nurturing a talent for writing. She began penning plays and short stories at a young age, and in 1938 she married George D. Petry, a mystery writer. Together the couple moved to New York City, and it was here that she began honing her journalistic skills, reporting for The People’s Voice and Amsterdam News. This time was hugely profitable for Petry as a writer of fiction as well, as the harsh reality of life in Harlem (which she reported on as a journalist) provided her with ample inspiration. In 1939, her first published story, “Marie of the Cabin Club,” appeared in The Afro American under the name Arnold Petry. In subsequent years she went on to publish a number of short stories under her own name, including “Like a Winding Sheet,” which was first published in 1945 in Crisis and subsequently collected into Martha Foley’s Best American Stories of 1946. In 1946 Petry’s first novel, The Street, was published and brought her national acclaim and a Houghton Mifflin Literary Fellowship. She went on to publish two more novels, Country Place (1947) and The Narrows (1953), as well as her collected short stories in Miss Muriel and Other Stories (1971). Much of Petry’s writing focuses on the issues of racial antagonism and gender explored in “Like a Winding Sheet,” shining a light on the challenges of life for everyday African Americans. She sums up her own approach in a 1965 essay, writing: “These are people…Look at them and remember them.” Petry died in her Connecticut hometown in 1997.
Get the entire Like a Winding Sheet LitChart as a printable PDF.
"My students can't get enough of your charts and their results have gone through the roof." -Graham S.
Download 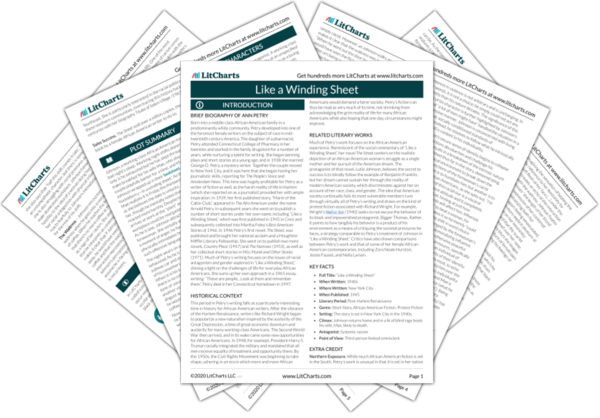 This period in Petry’s writing falls at a particularly interesting time in history for African American writers. After the vibrance of the Harlem Renaissance, writers like Richard Wright began to popularize a new naturalism inspired by the austerity of the Great Depression, a time of great economic downturn and austerity for many working-class Americans. The Second World War then arrived, and in its wake came some new opportunities for African Americans. In 1948, for examepl, President Harry S. Truman racially integrated the military and mandated that all men receive equality of treatment and opportunity there. By the 1950s, the Civil Rights Movement was beginning to take shape, ushering in an era in which more and more African Americans would demand a fairer society. Petry’s fiction can thus be read as very much of its time, not shrinking from acknowledging the grim reality of life for many African Americans while also hoping that one day, circumstances might improve.

Much of Petry’s work focuses on the African American experience. Reminiscent of the social commentary of “Like a Winding Sheet,” her novel The Street centers on the realistic depiction of an African American woman’s struggle as a single mother and her pursuit of the American dream. The protagonist of that novel, Lutie Johnson, believes the secret to success is to blindly follow the example of Benjamin Franklin, but her dream cannot sustain her through the reality of modern American society, which discriminates against her on account of her race, class, and gender. The idea that American society continually fails its most vulnerable members runs through virtually all of Petry’s writing and draws on the kind of protest fiction associated with Richard Wright. For example, Wright’s Native Son (1940) seeks to not excuse the behavior of its black and impoverished protagonist, Bigger Thomas. Rather, it points to how tangibly his behavior is a product of his environment as a means of critiquing the societal pressures he faces, a strategy comparable to Petry’s treatment of Johnson in “Like a Winding Sheet.” Critics have also drawn comparisons between Petry’s work and that of some of her female African American contemporaries, including Zora Neale Hurston, Jessie Fauset, and Nella Larsen.
Key Facts about Like a Winding Sheet

Northern Exposure. While much African American fiction is set in the South, Petry’s work is unusual in that it is set in her native Northeast. She is particularly interested in the racial politics of these northern communities, even tracing this history back centuries with her biography Tituba of Salem Village (1963).

Sales Success. The Street sold over a million copies, the first book by a female African American writer to do so. 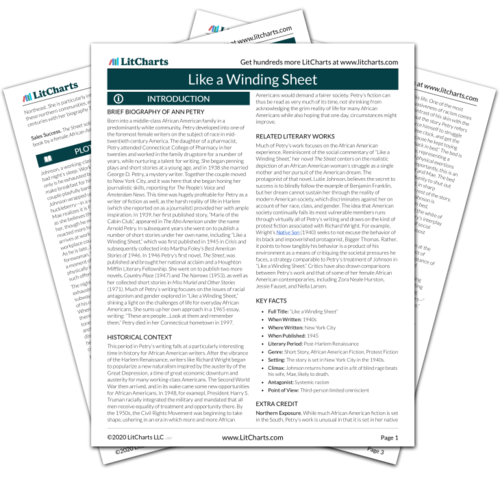 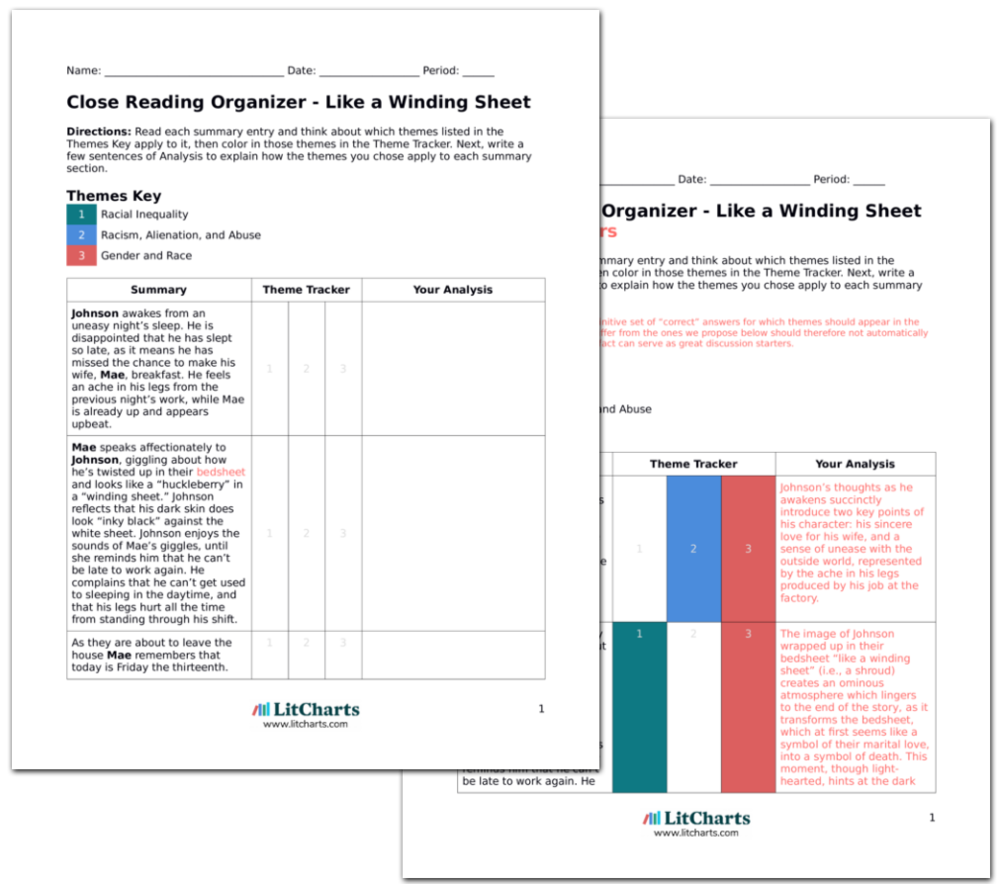