Get LitCharts A+
LitCharts assigns a color and icon to each theme in Like Water for Chocolate, which you can use to track the themes throughout the work.

As the novel is set during the Mexican Revolution, violence is inextricably linked to the time period and to the theme of liberation. In order to liberate themselves of the violent rule of the oligarchy, the rebels respond with organized political violence. Both the old oligarchy and the leaders of the rebellion are predominantly men, creating a sense that violence is a necessary part of maleness and male-dominated culture (or machismo). The novel, however, primarily focuses on the lives of women during that time. Rather than pitting male violence against female submissiveness, Esquivel instead creates a story which asks the question: in order to survive amidst both the old order and against the violence of the Revolution, must women either choose submissiveness or violence in kind? The novel further explores the insidious nature of abusive relationships, and shows the process by which abuse threatens to destroy the victim’s sense of self.

On a political level, the violence of the Revolution at first happens only in the background—but it gradually begins to interfere more with the characters’ lives. When federal troops lay siege to Piedras Negras, they kidnap Pedro and force Mama Elena and Chencha into hiding in the town center. Rosaura goes into labor, and Tita faces the dangerous task of delivering baby Roberto on her own. Even as the fighting escalates, the characters are forced to acclimate to a certain level of violence so that they can continue to go on with their own lives.

Both before and during the Revolution, male violence against women is a constant threat. After Rosaura and Pedro move away, rebels come through and decimate the local ranches in search of supplies, though Mama Elena runs them off. Later, the chaos of the war makes the ranch vulnerable, and bandits come and raid it, raping Chencha and leaving Mama Elena paralyzed. There are also other stories of rape in the novel: Dr. John Brown tells Tita about his grandmother, Morning Light, who was kidnapped and forced to marry John’s white grandfather. Sergeant Treviño, a soldier in Gertrudis’ troop, avenges the brutal rape of his mother and sister by killing their assailant.

But women aren’t merely depicted as victims of male violence in the novel. Female characters interact with violence in very different ways, often defying gender norms by becoming the aggressor. Mama Elena embraces violence through her physical abuse of Tita and her mastery of slaughtering animals for food. The brutality Mama Elena uses to control her household, however brutal, may be seen as her answer to the male violence that already pervades her culture. Mama Elena doesn’t question the patriarchy or its inherent violence, but instead patterns patriarchal oppression by using violence against those with less power than her.

While there are numerous examples of male violence in the novel, the principle violent relationship is between Mama Elena and Tita. Mama Elena’s role as abuser is evident because she not only forces Tita to submit, but also punishes Tita for expressing any emotion which would show the extent of her suffering. When Tita tries to ask Mama Elena’s permission to marry Pedro, Mama Elena not only refuses, but tells Tita that she is forbidden from expressing her disagreement. When Tita’s tears fall into Rosaura’s wedding cake, making everyone at the wedding cry and vomit, Mama Elena thinks Tita poisoned the cake. She beats Tita so badly that Tita is unable to get out of bed for weeks. Just as in many abusive romantic relationships, Tita is expected to take care of and love the person who beats her.

While Gertrudis is just as comfortable with violence as Mama Elena, her relationship with it is very different. Gertrudis chooses to freely join the Revolution as a fighter and works her way through the ranks to become a general. For Gertrudis, the answer to male violence isn’t to imitate it. Instead, she uses violence to challenge existing social structures. Rather than using violence on those weaker than her, like Mama Elena, Gertrudis fights those more powerful than her.

Esquivel makes a point to highlight the pervasiveness of violence in women’s lives, both in their societies and in their personal relationships. In the case of Gertrudis, the novel treats political violence as a sometimes necessary means to a worthy end. However, the novel rejects all other forms of violence, particularly those forms that have a lasting emotional impact on the victims.

The ThemeTracker below shows where, and to what degree, the theme of Violence and Abuse appears in each chapter of Like Water for Chocolate. Click or tap on any chapter to read its Summary & Analysis.
How often theme appears:
chapter length:
Chapter
Chapter 1: January
1
Chapter 2: February
2
Chapter 3: March
3
Chapter 4: April
4
Chapter 5: May
5
Chapter 6: June
6
Chapter 7: July
7
Chapter 8: August
8
Chapter 9: September
9
Chapter 10: October
10
Chapter 11: November
11
Chapter 12: December
12.
Get the entire Water for Chocolate LitChart as a printable PDF.
"My students can't get enough of your charts and their results have gone through the roof." -Graham S.
Download 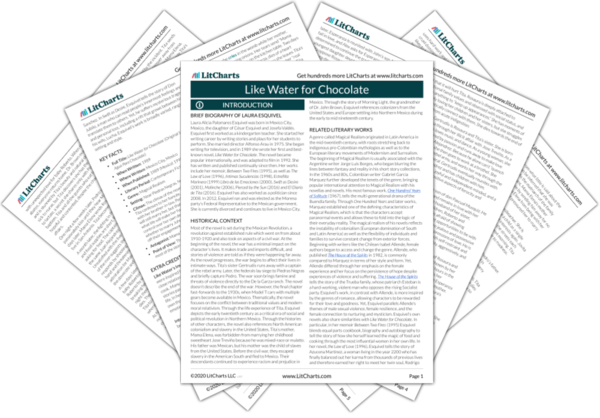 Violence and Abuse Quotes in Like Water for Chocolate

Below you will find the important quotes in Like Water for Chocolate related to the theme of Violence and Abuse.
Chapter 1: January Quotes

Pedro! What are you doing here?
Without answering, Pedro went to her, extinguished the lamp, pulled her to a brass bed that had once belonged to her sister, Gertrudis, and throwing himself upon her, caused her to lose her virginity and learn of true love.