Download this LitChart! (PDF)
Teachers and parents! Struggling with distance learning? Our Teacher Edition on Little Bee can help.

Welcome to the LitCharts study guide on Chris Cleave's Little Bee. Created by the original team behind SparkNotes, LitCharts are the world's best literature guides.

A concise biography of Chris Cleave plus historical and literary context for Little Bee.

A quick-reference summary: Little Bee on a single page.

In-depth summary and analysis of every chapter of Little Bee. Visual theme-tracking, too.

Explanations of Little Bee's symbols, and tracking of where they appear.

An interactive data visualization of Little Bee's plot and themes.

Chris Cleave was born in London on May 14, 1973, but spent the first eight years of his childhood in Cameroon, which shares its western border with Nigeria. Before becoming an author, Cleave attended the University of Oxford to study experimental psychology and worked in a variety of jobs, including as a barman, sailor, teacher, journalist, and early internet entrepreneur. Cleave’s debut novel, Incendiary, won the 2006 Somerset Maugham Award and made the shortlist for that year’s prestigious Commonwealth Writer’s Prize and has since become a film. In 2008, Cleave published The Other Hand, titled Little Bee in American and Canadian editions. Little Bee suffered initially slow sales, but by 2009 word of mouth propelled it to the top of both the Sunday Times and the New York Times Best Seller lists. In 2012 Cleave published his third novel, Gold, and in 2016 published Everyone Brave is Forgiven, which immediately topped the New York Times Best Seller list. Cleave lives in London with his French wife and three children.
Get the entire Little Bee LitChart as a printable PDF.
"My students can't get enough of your charts and their results have gone through the roof." -Graham S.
Download 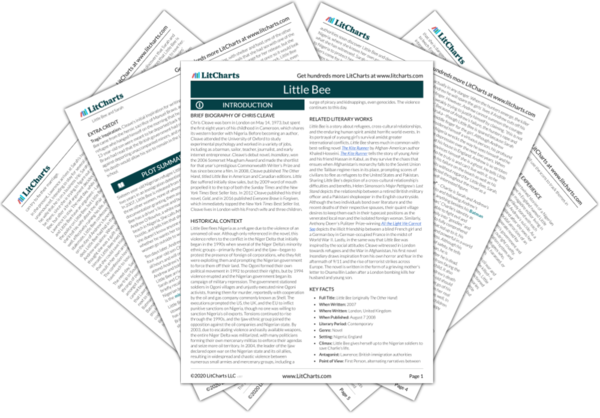 Little Bee flees Nigeria as a refugee due to the violence of an unnamed oil war. Although only referenced in the novel, this violence refers to the conflict in the Niger Delta that initially began in the 1990s when several of the Niger Delta’s minority ethnic groups—primarily the Ogoni and the Ijaw—began to protest the presence of foreign oil corporations, who they felt were exploiting them and prompting the Nigerian government to force them off their land. The Ogoni formed their own political movement in 1992 to protect their rights, but by 1994 violence erupted and the Nigerian government began its campaign of military repression. The government stationed soldiers in Ogoni villages and unjustly executed nine Ogoni activists, framing them for murder, reportedly with cooperation by the oil and gas company commonly known as Shell. The executions prompted the US, the UK, and the EU to inflict punitive sanctions on Nigeria, though no one was willing to sanction Nigeria’s oil exports. Tensions continued to rise through the 1990s, and the Ijaw ethnic group joined the opposition against the oil companies and Nigerian state. By 2003, due to escalating violence and easily available weapons, the entire Niger Delta was militarized, with many politicians forming their own mercenary militias to enforce their agendas and seize more oil territory. In 2004, the leader of the Ijaw declared open war on the Nigerian state and its oil allies, resulting in widespread and chaotic violence between numerous small armies and mercenary groups, including a surge of piracy and kidnappings, even genocides. The violence continues to this day.

Other Books Related to Little Bee

Little Bee is a story about refugees, cross-cultural relationships, and the enduring human spirit amidst horrific world events. In its portrayal of a young girl’s survival amidst greater international conflicts, Little Bee shares much in common with best-selling novel The Kite Runner by Afghan-American author Khaled Hosseini. The Kite Runner tells the story of young Amir and his friend Hassan in Kabul, as they survive the chaos that ensues when Afghanistan’s monarchy falls to the Soviet Union and the Taliban regime rises in its place, prompting scores of civilians to flee as refugees to the United States and Pakistan. Sharing Little Bee’s depiction of a cross-cultural relationship’s difficulties and benefits, Helen Simonson’s Major Pettigrew’s Last Stand depicts the relationship between a retired British military officer and a Pakistani shopkeeper in the English countryside. Although the two individuals bond over literature and the recent deaths of their respective spouses, their quaint village desires to keep them each in their typecast positions as the venerated local man and the isolated foreign woman. Similarly, Anthony Doerr’s Pulitzer Prize-winning All the Light We Cannot See depicts the illicit friendship between a blind French girl and a German boy in German-occupied France in the midst of World War II. Lastly, in the same way that Little Bee was inspired by the social attitudes Cleave witnessed in London towards refugees and the War in Afghanistan, his first novel Incendiary draws inspiration from his own horror and fear in the aftermath of 9/11 and the rise of terrorist strikes across Europe. The novel is written in the form of a grieving mother’s letter to Osama Bin Laden after a London bombing kills her husband and young son.
Key Facts about Little Bee

Tragic Inspiration. Cleave’s initial inspiration for writing Little Bee came from the heroic sacrifice of Manuel Bravo, an Angolan refugee who hanged himself on the morning that he and his 13-year-old son were meant to be deported back to Angola. Bravo had read that the British government had regulations against deporting unaccompanied minors, and reasoned that his death would allow his son to remain in the UK and enroll in school. 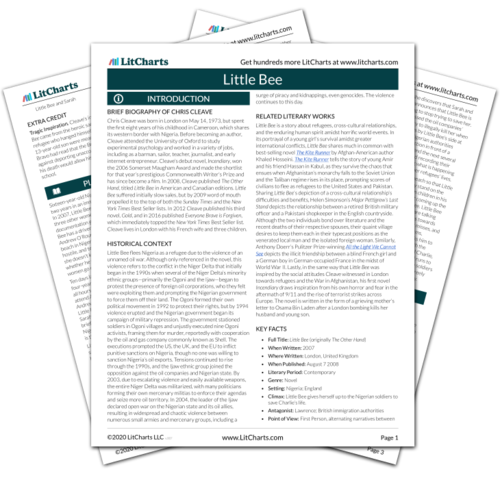 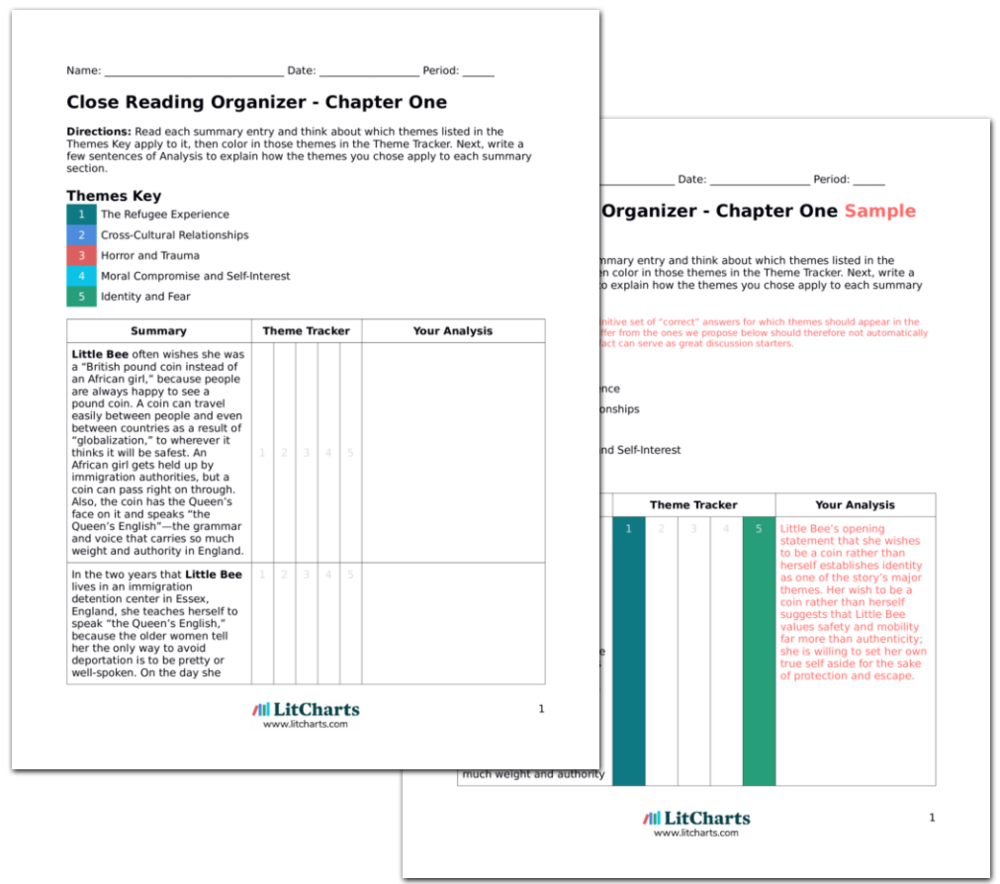