Mystery is at the heart of this novel—so much so that it is embedded in the structure of the book. Rather than separating the novel into chapters, Green sections his book into days, each of which is titled with a number of days and the word “before” or “after.” For example, the first section of the book is called “one-hundred thirty-six days before.” Before what, however, is not made clear to the reader until two-thirds of the way through the book.

Just as the mysterious structure of Looking for Alaska makes the novel intriguing, mystery is an intriguing part of Miles’ life as well. At the book’s beginning, Miles decides to move to Alabama to seek his “Great Perhaps.” He is excited about the mysteries that await him, and he immediately becomes obsessed with understanding Alaska, who is a mystery herself. But while Alaska’s active cultivation of a mysterious air does make her interesting to others, she suffers because of it. She is not willing to let others in, and is afraid for others to see the horrible person that she thinks herself to be. As a result, Alaska prevents her friends from getting to know her as well as they want to. Indeed, Miles and the Colonel let her drive away on the night of her death because they do not realize how upset she is, or that it is the anniversary of her mother’s death.

Only once Miles gives up trying to figure out Alaska and her death can he finally see Alaska for what she really is: a mystery that is not meant to be answered. Further, when he stops chasing after Alaska, he is once again able to pursue his own Great Perhaps. Ultimately, Miles is okay with not knowing exactly what happened to Alaska because it doesn’t matter what happened. The solutions to mysteries aren’t always important. Miles realizes that whether or not she killed herself, he still loves her and cares about her and believes that her spirit lives on. For him, that is enough.

Mystery and the Unknown ThemeTracker 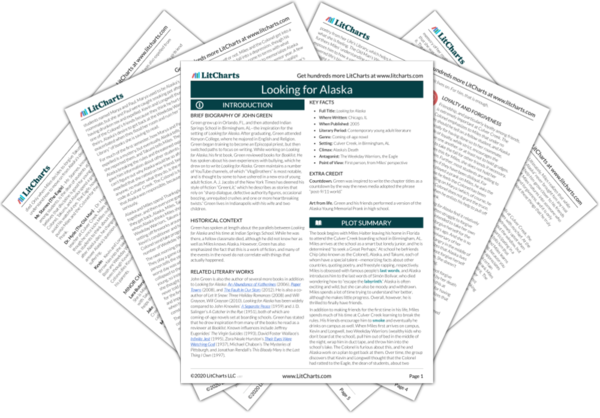 Mystery and the Unknown Quotes in Looking for Alaska

Below you will find the important quotes in Looking for Alaska related to the theme of Mystery and the Unknown.
1. One Hundred Thirty-Six Days Before Quotes

“François Rabelais. He was this poet. And his last words were ‘I go to seek a Great Perhaps.’ That’s why I’m going. So I don’t have to wait until I die to start seeking a Great Perhaps.”

2. One Hundred Twenty-Eight Days Before Quotes

“That’s the mystery, isn’t it? Is the labyrinth living or dying? Which is he trying to escape—the world or the end of it?”

Unlock with LitCharts A+
4. One Hundred Twenty-Six Days Before Quotes

“I must talk, and you must listen, for we are engaged here in the most important pursuit in history: the search for meaning. What is the nature of being a person? What is the best way to go about being a person? How did we come to be, and what will become of us when we are no longer? In short: What are the rules of this game, and how might we best play it?”

Unlock with LitCharts A+
29. Two Days Before Quotes

“This is so fun…but I’m so sleepy. To be continued?”

“And now she was colder by the hour, more dead with every breath I took. I thought: That is the fear: I have lost something important, and I cannot find it, and I need it. It is fear like if someone lost his glasses and went to the glasses store and they told him that the world had run out of glasses and he would just have to do without.”

“So I know she forgives me, just as I forgive her. Thomas Edison’s last words were: “It’s very beautiful over there.” I don’t know where there is, but I believe it’s somewhere, and I hope it’s beautiful.”