Download this LitChart! (PDF)
Teachers and parents! Struggling with distance learning? Our Teacher Edition on Looking for Alibrandi can help.

Welcome to the LitCharts study guide on Melina Marchetta's Looking for Alibrandi. Created by the original team behind SparkNotes, LitCharts are the world's best literature guides.

A concise biography of Melina Marchetta plus historical and literary context for Looking for Alibrandi.

A quick-reference summary: Looking for Alibrandi on a single page.

In-depth summary and analysis of every chapter of Looking for Alibrandi. Visual theme-tracking, too.

Explanations, analysis, and visualizations of Looking for Alibrandi's themes.

Description, analysis, and timelines for Looking for Alibrandi's characters.

Explanations of Looking for Alibrandi's symbols, and tracking of where they appear.

An interactive data visualization of Looking for Alibrandi's plot and themes.

Melina Marchetta was born into a family of Australian immigrants, like the character Josie in Looking for Alibrandi—the story of Marchetta’s grandmother immigrating to Australia from Italy in the 1930s loosely inspired novel. Unsure of her academic abilities, Marchetta left school at age 15, but later earned a teaching degree. She taught at a Catholic boys’ school in Sydney for 10 years. Looking for Alibrandi was her first novel; published in 1992, it became an instant hit and sold out its first print run in only two months. It earned a number of prestigious awards, both in Australia and worldwide. Marchetta continued to teach until 2006, after the publication of her third young adult novel, On the Jellicoe Road. In addition to writing full-time, Marchetta often gives interviews and lectures about her books and her writing process, and she also wrote the screenplay for the award-winning 2000 film adaptation of Looking for Alibrandi. Marchetta lives in Sydney, Australia.
Get the entire Looking for Alibrandi LitChart as a printable PDF.
"My students can't get enough of your charts and their results have gone through the roof." -Graham S.
Download 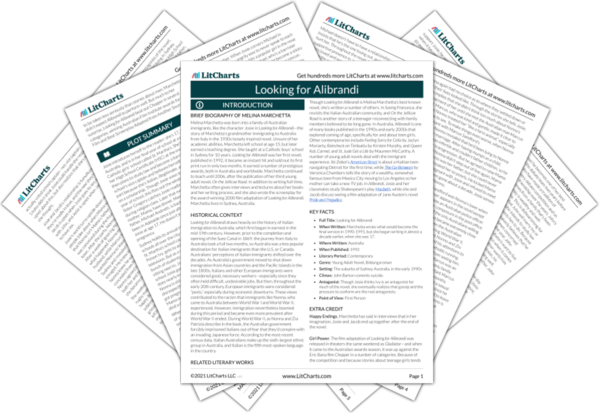 Historical Context of Looking for Alibrandi

Looking for Alibrandi draws heavily on the history of Italian immigration to Australia, which first began in earnest in the mid-19th century. However, prior to the completion and opening of the Suez Canal in 1869, the journey from Italy to Australia took a full two months, so Australia was a less popular destination for Italian immigrants than the U.S. or Canada. Australians’ perceptions of Italian immigrants shifted over the decades. As Australia’s government moved to shut down immigration from Asian countries and the Pacific Islands in the late 1800s, Italians and other European immigrants were considered good, necessary workers—especially since they often held difficult, undesirable jobs. But then, throughout the early 20th century, European immigrants were considered “pests,” especially during economic downturns. These views contributed to the racism that immigrants like Nonna, who came to Australia between World War I and World War II, experienced. However, immigration nevertheless boomed during this period and became even more prevalent after World War II ended. During World War II, as Nonna and Zia Patrizia describe in the book, the Australian government forcibly imprisoned Italians out of fear that they’d conspire with an invading Japanese force. According to the most recent census data, Italian Australians make up the sixth-largest ethnic group in Australia, and Italian is the fifth most-spoken language in the country.

Other Books Related to Looking for Alibrandi

Though Looking for Alibrandi is Melina Marchetta’s best-known novel, she’s written a number of others. In Saving Francesca, she revisits the Italian Australian community, and On the Jellicoe Road is another story of a teenager reconnecting with family members believed to be long gone. In Australia, Alibrandi is one of many books published in the 1990s and early 2000s that explored coming of age, specifically for and about teen girls. Other contemporaries include Feeling Sorry for Celia by Jaclyn Moriarty, Raincheck on Timbuktu by Kirsten Murphy, and Queen Kat, Carmel, and St. Jude Get a Life by Maureen McCarthy. A number of young adult novels deal with the immigrant experience. Ibi Zoboi’s American Street is about a Haitian teen navigating Detroit for the first time, while The Go-Between by Veronica Chambers tells the story of a wealthy, somewhat famous teen from Mexico City moving to Los Angeles so her mother can take a new TV job. In Alibrandi, Josie and her classmates study Shakespeare’s play Macbeth, while she and Jacob discuss seeing a film adaptation of Jane Austen’s novel Pride and Prejudice.
Key Facts about Looking for Alibrandi

Extra Credit for Looking for Alibrandi

Happy Endings. Marchetta has said in interviews that in her imagination, Josie and Jacob end up together after the end of the novel.

Girl Power. The film adaptation of Looking for Alibrandi was released in theaters the same weekend as Gladiator—and when it came to the Australian awards season, it was up against the Eric Bana film Chopper in a number of categories. Because of the competition and because stories about teenage girls tends to be taken less seriously than stories about men, Marchetta didn’t expect Alibrandi to perform well. But much to her surprise, Looking for Alibrandi beat out Chopper in several categories, winning Australian Film Institute awards for Best Film and Best Screenplay Adapted from Another Source. 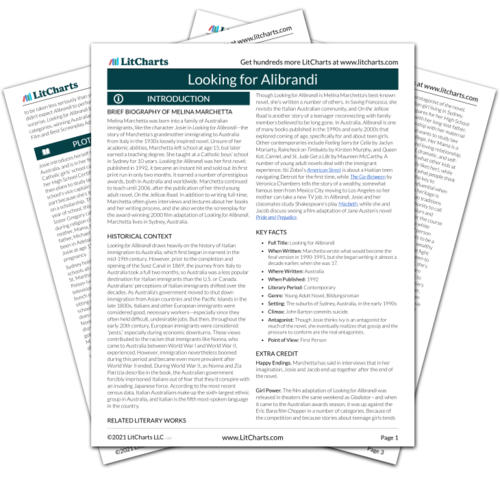 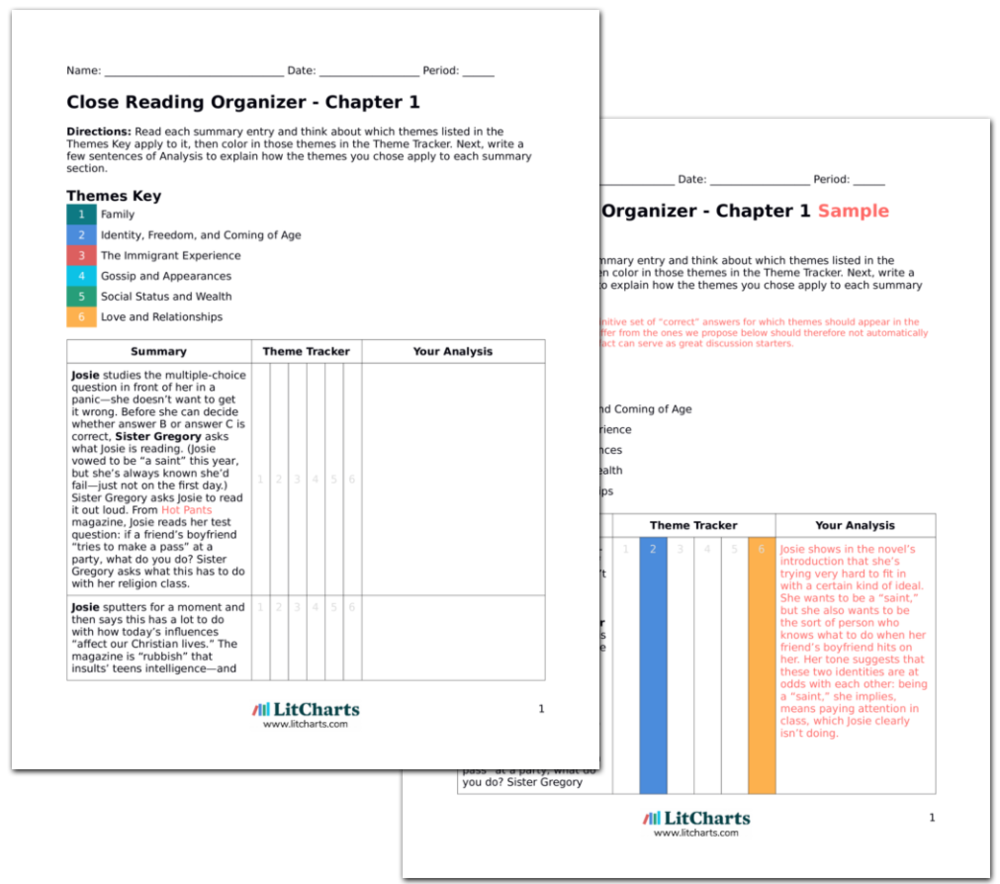