Although Love in the Time of Cholera primarily focuses on interpersonal issues such as love and relationships, the backdrop of the story is much more somber. The characters in the novel find themselves in a world ravaged by civil war, cholera, and environmental destruction. Politicians prove incapable of stemming a tide of civil conflicts, religious leaders bow to social interests, and businessmen prove committed only to their self-interest. As is typical of magical realism, a literary style of which García Márquez is considered one of the founders, the narrator adopts a neutral tone toward immoral or horrific events, mentioning complex moral issues with apparent indifference and detachment in order to reflect the cynicism that characters feel toward their circumstances. The hopeless disillusionment that characters face throughout the novel underscores the dire and widespread consequences of broken institutions. The futility of their small attempts to better their circumstances suggests that settling into resignation, rather than resistance, is sometimes the inevitable reality of living in a corrupt society.

In a world marked by chaos, ambition, and greed, powerful human institutions such as the government and the Catholic Church seem unable to change things. On a national scale, politics fail to bring the peace and stability for which people yearn. Ever since the country’s independence, civil wars have repeated themselves in endless succession, giving citizens no rest. The conflict opposes Liberals and Conservatives—although, as Dr. Juvenal Urbino notes, politicians do not actually confront each other on the basis of political opinions but according to their social class. “A Liberal president was exactly the same as a Conservative president, but not as well dressed,” Dr. Urbino wryly notes. His cynical view reflects the idea that the country is never going to escape the cycles of war. Like him, everyone is used to the idea that war is ineluctable, spreading in the same way an epidemic of cholera might. However, Dr. Urbino notes that people speak about the war as though it were an ordinary fact of life, but that their eyes remain full of terror. At odds with the narrator’s detached tone, this observation reminds the reader that war is not normal but is, in fact, deeply traumatic to everyone involved.

Beyond politics, religious institutions also fail to serve as an antidote to sin and harm. The Catholic Church is shown to have methods and goals that are contradictory with the basic tenets of faith and moral virtue. Fermina Daza notes the hypocritical attitude of the nuns who expelled her from school for writing a love letter, but who, under pressure from the Archbishop, later intercede to organize her marriage with Dr. Urbino. This shows that, like any other human institution, the Church is prey to social and financial pressures. Some members of the Church even take sides in the civil war, using their authority to promote political goals instead of fighting for peace. This discredits the Church as an institution capable of bringing reconciliation and stability to society and demonstrates that religion, which commonly serves uniting force of moral soundness, merely validates characters’ disillusionment in this setting.

Businesspeople further take advantage of this chaotic situation to serve their self-interest, not the common good. Fermina discovers that her father Lorenzo Daza was not an honest trader, but a man who took part in illegal schemes to make large profits, including from the sale of arms that fueled the civil war. This leads her to feel disillusioned about people’s motives. Similarly, excessive deforestation and hunting—presumably out of commercial self-interest—has destroyed the environment that Fermina and Florentino see from the boat. The landscape is burnt, deprived of trees, and the animal population annihilated. This apocalyptic setting mirrors the dejection and hopelessness that the characters feel in the face of seemingly limitless corruption.

Faced with such disorder, characters realize that, beyond small acts of resistance, they must resign themselves to the inherently savage nature of the human world. Lacking inspiring role models, individuals are forced to find their own ways to behave morally. Fermina’s anger at the Catholic Church does not lead her not to stop believing in God, but to express her faith in a private way. She prefers to pray silently to God than to join a religious congregation. She does not actively fight the system but, by removing herself from it and finding joy in her religious practice, she believes her commitment to God to be more sincere. Similarly, the ship captain fights the destruction of the land in his own way. When an American man kills a manatee, an endangered species, Captain Samaritano is so furious that he abandons the man on shore and is later imprisoned for this act. However, the captain shows no regret, believing that it was his duty to protect the vulnerable animal. His resolve highlights his moral values and his capacity to sacrifice himself for the common good, in contrast with the bleak, morally-depraved society in which he lives.

In a society in which institutions do not seem to function, though, the most common reaction is cynicism and despondency. Appalled by the destruction he sees in and around the river, Florentino concludes that “there was nothing anyone could do except bring in a new river.” In the face of widespread damage, Florentino realizes that individual human deeds are insufficient: only a complete rebuilding might provide a solution to the destruction. This desire is obviously impossible to realize, and thus expresses the desolation that Florentino feels in the face of a situation he cannot change.

Therefore, the political and social backdrop to Love in the Time of Cholera is a bleak environment in which humans feel helpless before the immorality and self-interest that guides many members of society. Beyond small acts of personal resistance, characters are forced to resign themselves to the savage instincts of human nature, which are capable of destroying the very planet they depend on to live.

The ThemeTracker below shows where, and to what degree, the theme of Moral Corruption and Cynicism appears in each chapter of Love in the Time of Cholera. Click or tap on any chapter to read its Summary & Analysis.
How often theme appears:
chapter length:
Chapter
Chapter 1
1
Chapter 2
2
Chapter 3
3
Chapter 4
4
Chapter 5
5
Chapter 6
6
Get the entire Love in the Time of Cholera LitChart as a printable PDF.
"My students can't get enough of your charts and their results have gone through the roof." -Graham S.
Download 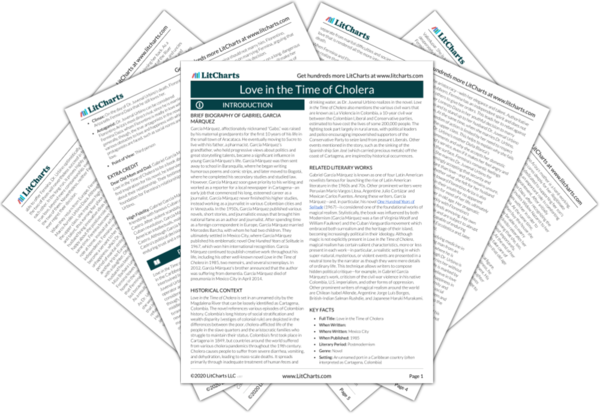 Below you will find the important quotes in Love in the Time of Cholera related to the theme of Moral Corruption and Cynicism.
Chapter 6 Quotes

At night they were awakened not by the siren songs of manatees on the sandy banks but by the nauseating stench of corpses floating down to the sea. For there were no more wars or epidemics, but the swollen bodies still floated by. The Captain, for once, was solemn: “We have orders to tell the passengers that they are accidental drowning victims.” 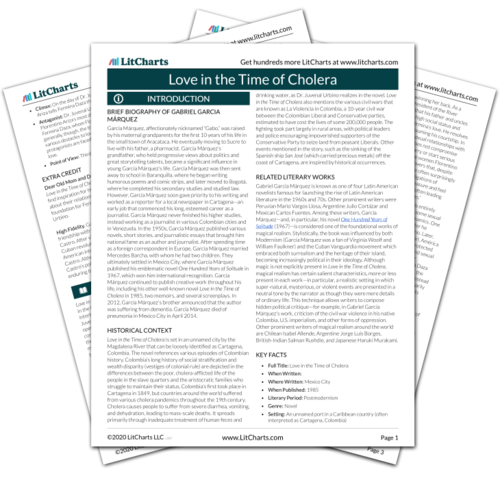 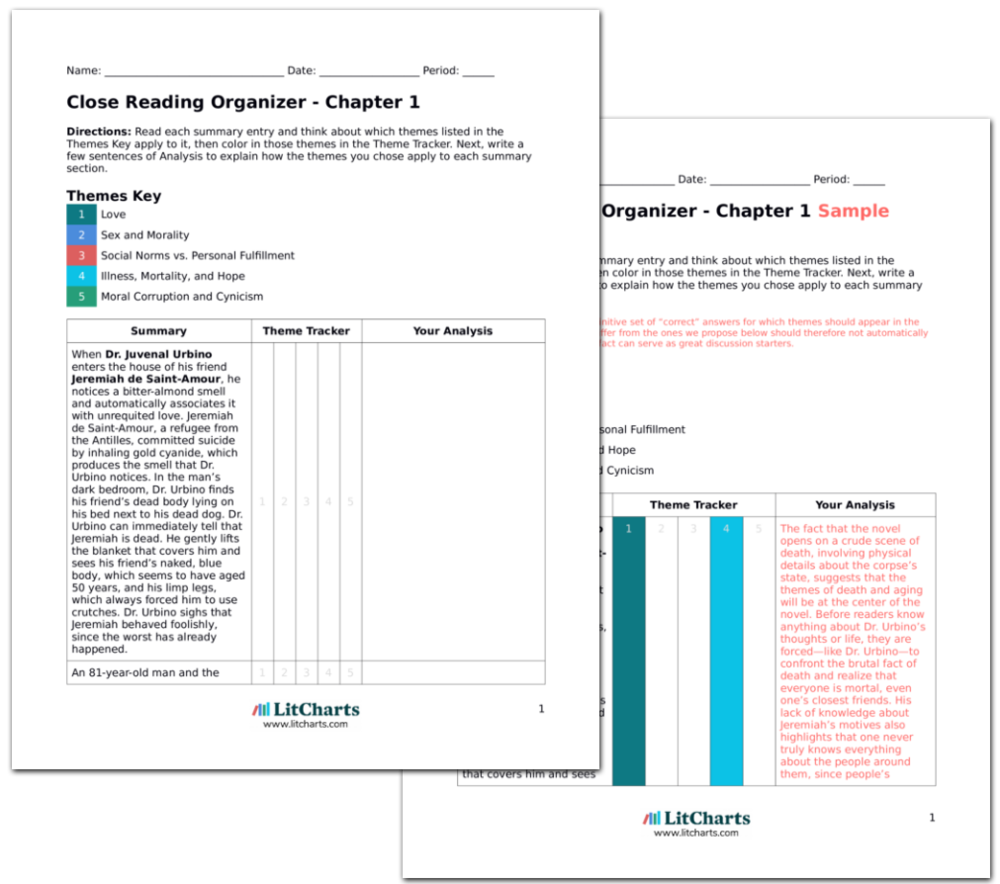