Get LitCharts A+
LitCharts assigns a color and icon to each theme in Love's Labor's Lost, which you can use to track the themes throughout the work.

At the beginning of the play, Ferdinand plans to dedicate all his time and energy to serious intellectual pursuits, denying all bodily pleasures. And the princess of France comes to visit him on an important diplomatic mission about the exchange of a territory. However, the rest of the play is filled not with serious business, but with merriment, jokes, and amusement. The king ends up caring less about negotiating with the princess than about entertaining and wooing her. Even the schoolmaster character Holofernes seems to care more about fun riddles and clever jokes than any real education. The play thus questions the importance of supposedly serious business and the distinction between labor and pleasure.

As the play’s many efforts of wooing—from writing, to strategizing meetings, to putting on the pageant of the Nine Worthies—show, fun can be serious work. The play’s justification of amusement and pleasure can be seen partially as Shakespeare meditating on his own writing of comedy. Indeed, the play has a significant meta-theatrical strain: the women’s hiding their true identities in masks, the men’s dressing up as Russian ambassadors, and the show of the Nine Worthies can all be seen as performances within the main performance of Love’s Labor’s Lost, allowing the play to reflect on its own status as a comedic production. In the final scene, Berowne even reflects on whether his and his friends’ loves have a suitably happy ending for a comedy.

Just as the play’s characters take time away from serious pursuits to devote energy to amusement, the play’s actors, producers, and audience devote time and energy to creating and enjoying an amusing production. The play’s consideration of work and pleasure can thus be seen as partially justifying its own existence as an amusing comedy. However, the pure merriment of the play cannot last forever. The sudden announcement of the death of the king of France effectively puts an end to the play, suggesting that at some point jokes must be set aside. As the princess decides to take a year for mourning, there appears to be a time for amusement and a time for more serious matters. The play ultimately argues for the importance of moderation and balance: rather than trying to abstain from all enjoyment or indulge in pure play forever, one must recognize that life is a mixture of both fun and work, love and labor. It is important to appreciate light comedy, then, while also realizing that every comedy must come to an end. 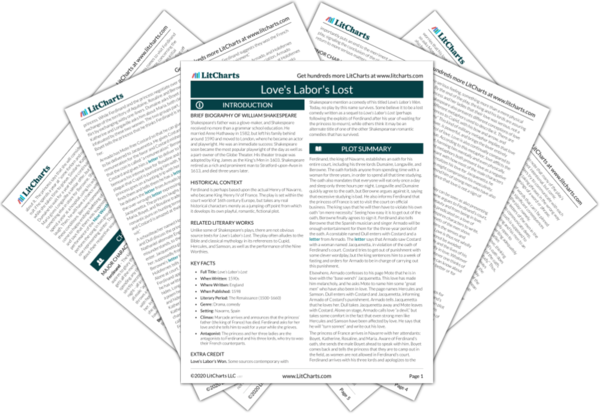 Below you will find the important quotes in Love's Labor's Lost related to the theme of Work, Pleasure, and Comedy.
Act 1, Scene 1 Quotes

Therefore, brave conquerors, for so you are,
That war against your own affections
And the huge army of the world’s desires,
Our late edict shall strongly stand in force.
Navarre shall be the wonder of the world;
Our court shall be a little academe,
Still and contemplative in living art.

O, these are barren tasks, too hard to keep,
Not to see ladies, study, fast, not sleep.

O, we have made a vow to study, lords,
And in that vow we have forsworn our books.
For when would you, my liege, or you, or you,
In leaden contemplation have found out
Such fiery numbers as the prompting eyes
Of beauty’s tutors have enriched you with?
Other slow arts entirely keep the brain
And therefore, finding barren practicers,
Scarce show a harvest of their heavy toil.
But love, first learned in a lady’s eyes,
Lives not alone immured in the brain,
But with the motion of all elements
Courses as swift as thought in every power,
And gives to every power a double power,
Above their functions and their offices.
It adds a precious seeing to the eye.
A lover’s eyes will gaze an eagle blind.
A lover’s ear will hear the lowest sound,
When the suspicious head of theft is stopped.
Love’s feeling is more soft and sensible
Than are the tender horns of cockled snails.
. . .
Never durst poet touch a pen to write
Until his ink were tempered with love’s sighs.
. . .
From women’s eyes this doctrine I derive.
They sparkle still the right Promethean fire.
They are the books, the arts, the academes
That show, contain, and nourish all the world.

We are wise girls to mock our lovers so.

They are worse fools to purchase mocking so.

The gallants shall be tasked,
For, ladies, we will every one be masked,
And not a man of them shall have the grace,
Despite of suit, to see a lady’s face.
Hold, Rosaline, this favor thou shalt wear,
And then the King will court thee for his dear.
Hold, take thou this, my sweet, and give me thine
So shall Berowne take me for Rosaline.

God save you, madam.

I am sorry, madam, for the news I bring
Is heavy in my tongue. The King your father—

Dead, for my life.

Even so. My tale is told.

Worthies away! The scene begins to cloud.

Oft have I heard of you, my Lord Berowne,
Before I saw you; and the world’s large tongue
Proclaims you for a man replete with mocks,
Full of comparisons and wounding flouts,
Which you on all estates will execute
That lie within the mercy of your wit.
To weed this wormwood from your fruitful brain,
And therewithal to win me, if you please,
Without the which I am not to be won,
You shall this twelvemonth term from day to day
Visit the speechless sick, and still converse
With groaning wretches; and your task shall be,
With all the fierce endeavor of your wit,
To enforce the pained impotent to smile.

To move wild laughter in the throat of death?
It cannot be, it is impossible.
Mirth cannot move a soul in agony.

Our wooing doth not end like an old play.
Jack hath not Jill. These ladies’ courtesy
Might well have made our sport a comedy.