A concise biography of August Wilson plus historical and literary context for Ma Rainey’s Black Bottom.

In-depth summary and analysis of every act of Ma Rainey’s Black Bottom. Visual theme-tracking, too.

Explanations of Ma Rainey’s Black Bottom's symbols, and tracking of where they appear.

Wilson and his five siblings were raised in a poor, predominately Black neighborhood of Pittsburgh. After his mother and father divorced in the 1950s, Wilson and his family moved to Hazelwood—a mostly white, working-class section of Pittsburgh. They faced overt bigotry in this community, as racist white people threw bricks through the windows of the Wilsons’ new home. Wilson himself dropped out of high school during his sophomore year because he was falsely accused of plagiarizing an essay about Napoleon I. At this point, he started working odd jobs and made great use of Pittsburgh’s Carnegie Library, which eventually gave him an honorary high school diploma because of how much time he spent reading in the stacks. Best known for his plays Fences, The Piano Lesson, Joe Turner’s Come and Gone, and Ma Rainey’s Black Bottom, Wilson once said that his work was most influenced by “four B’s”: blues music, the writers Jorge Luis Borges and Amiri Baraka, and the painter Romare Bearden. Wilson wrote 16 plays, 10 of which make up what’s known as his Pittsburgh Cycle—a cycle in which nine of the ten plays take place in the Pittsburgh’s Hill District. Wilson died in Seattle at the age of 60, leaving behind a legacy as one of most important playwrights of the 20th century.
Get the entire Ma Rainey’s Black Bottom LitChart as a printable PDF.
"My students can't get enough of your charts and their results have gone through the roof." -Graham S.
Download 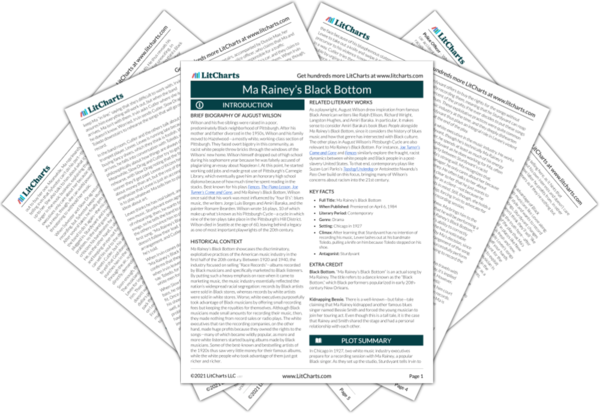 Ma Rainey’s Black Bottom showcases the discriminatory, exploitative practices of the American music industry in the first half of the 20th century. Between 1920 and 1940, the industry focused on selling “Race Records”—albums recorded by Black musicians and specifically marketed to Black listeners. By putting such a heavy emphasis on race when it came to marketing music, the music industry essentially reflected the nation’s widespread racial segregation: records by Black artists were sold in Black stores, whereas records by white artists were sold in white stores. Worse, white executives purposefully took advantage of Black musicians by offering small recording fees but keeping the royalties for themselves. Although Black musicians made small amounts for recording their music, then, they made nothing from record sales or radio plays. The white executives that ran the recording companies, on the other hand, made huge profits because they owned the rights to the songs—many of which became wildly popular, as more and more white listeners started buying albums made by Black musicians. Some of the best-known and bestselling artists of the 1920s thus saw very little money for their famous albums, while the white people who took advantage of them just got richer and richer.

As a playwright, August Wilson drew inspiration from famous Black American writers like Ralph Ellison, Richard Wright, Langston Hughes, and Amiri Baraka. In particular, it makes sense to consider Amiri Baraka’s book Blues People alongside Ma Rainey’s Black Bottom, since it considers the history of blues music and how that genre has intersected with Black culture. The other plays in August Wilson’s Pittsburgh Cycle are also relevant to Ma Rainey’s Black Bottom. For instance, Joe Turner’s Come and Gone and Fences similarly explore the fraught, racist dynamics between white people and Black people in a post-slavery United States. To that end, contemporary plays like Suzan-Lori Parks’s Topdog/Underdog or Antoinette Nwandu’s Pass Over build on this focus, bringing many of Wilson’s concerns about racism into the 21st century.
Key Facts about Ma Rainey’s Black Bottom

Black Bottom. “Ma Rainey’s Black Bottom” is an actual song by Ma Rainey. The title refers to a dance known as the “Black Bottom,” which Black performers popularized in early 20th-century New Orleans.

Kidnapping Bessie. There is a well-known—but false—tale claiming that Ma Rainey kidnapped another famous blues singer named Bessie Smith and forced the young musician to join her touring act. Even though this is a tall tale, it is the case that Rainey and Smith shared the stage and had a personal relationship with each other. 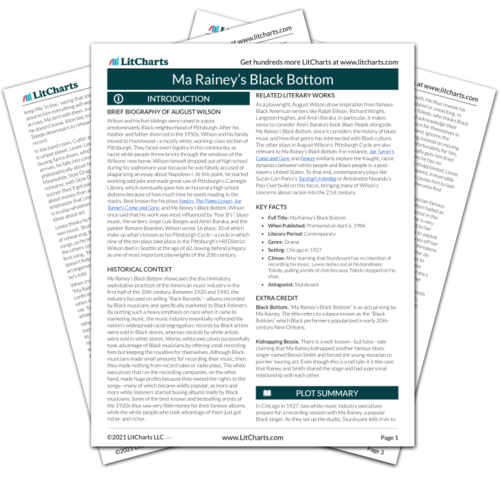 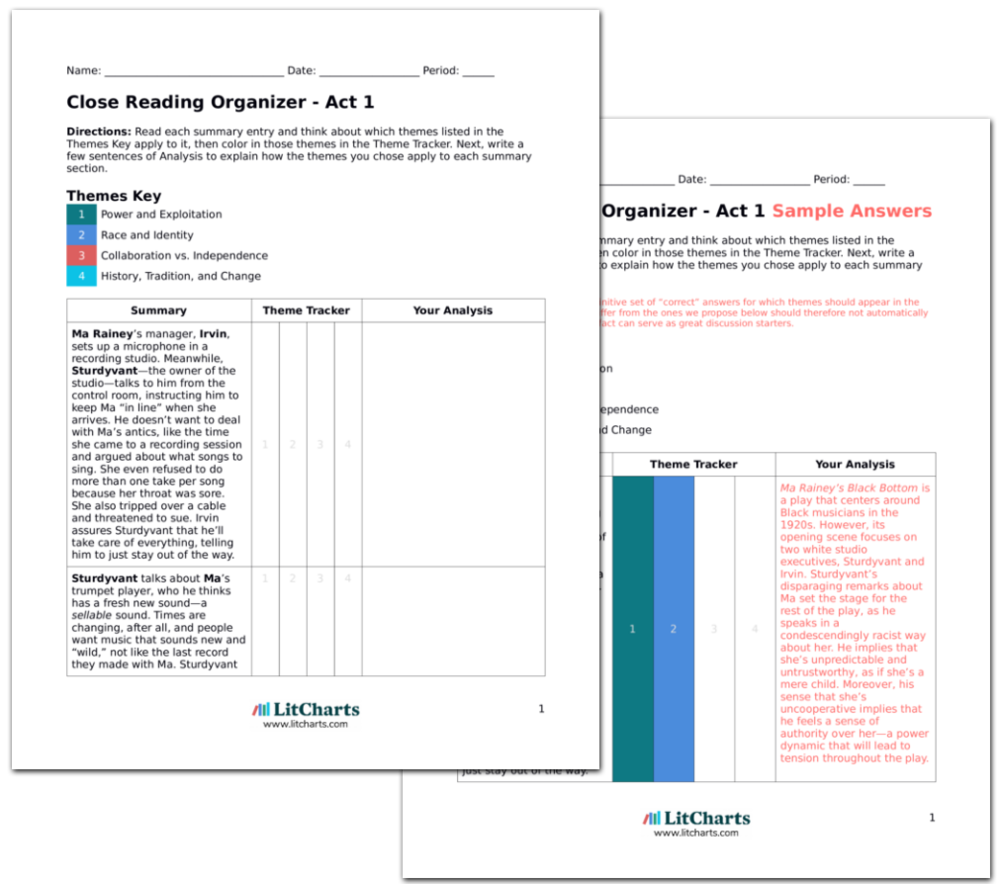