Welcome to the LitCharts study guide on Gustave Flaubert's Madame Bovary. Created by the original team behind SparkNotes, LitCharts are the world's best literature guides.

A concise biography of Gustave Flaubert plus historical and literary context for Madame Bovary.

A quick-reference summary: Madame Bovary on a single page.

In-depth summary and analysis of every chapter of Madame Bovary. Visual theme-tracking, too.

Explanations of Madame Bovary's symbols, and tracking of where they appear.

An interactive data visualization of Madame Bovary's plot and themes.

Gustave Flaubert was born and raised in Rouen, the son of a wealthy, middle-class surgeon. A neighbor often read Don Quixote aloud to Flaubert when he was very young, and he knew Quixote’s story by heart. He attended school in Rouen and then law school in Paris, where he made many literary friends. After a few years, Flaubert left law school and moved to Croisset, a small town near Rouen, where he lived for the remainder of his life. In 1846, about the time he left Paris, he began the one important romantic relationship of his life – a literary and epistolary friendship with the poet Louise Colet. Between 1846 and 1850, when he began work on Madame Bovary, Flaubert travelled with friends through the Middle East. On that journey, he contracted venereal diseases that weakened him for the rest of his life. He had written two shorter works before Madame Bovary, a novella called November and a baroque, magical book called The Temptation of Saint Anthony; his literary friends advised him to stay away from the supernatural and the lyrical and to shift his focus onto daily life. From then on, he alternated between the two modes. Madame Bovary, Sentimental Education, the Three Stories and the unfinished Bouvard and Pécuchet describe the lives of his contemporaries, especially the petit bourgeoisie, but in the historical novel Salammbô, published just after Madame Bovary, he returns to the lurid style of his earlier work. Flaubert wrote slowly and painstakingly, and was much less prolific than many of his contemporaries. He devoted himself to the labor of creating a perfect sentence, and the accident of the perfect word (le mot juste). He died at home of a cerebral hemorrhage.
Get the entire Madame Bovary LitChart as a printable PDF.
"My students can't get enough of your charts and their results have gone through the roof." -Graham S.
Download 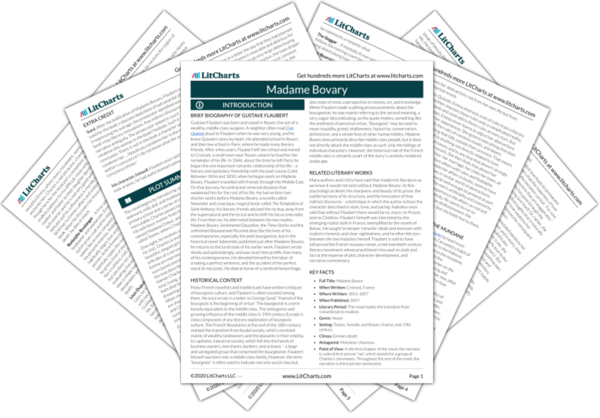 Many French novelists and intellectuals have written critiques of bourgeois culture, and Flaubert is often counted among them. He once wrote in a letter to George Sand: “Hatred of the bourgeois is the beginning of virtue.” The bourgeoisie is a term loosely equivalent to the middle class. The emergence and growing influence of the middle class in 19th century Europe is a key component of any literary exploration of bourgeois culture. The French Revolution at the end of the 18th century marked the transition from feudal society, which consisted mainly of wealthy landowners and the peasants in their employ, to capitalist, industrial society, which fell into the hands of business owners, merchants, bankers, and artisans – a large and variegated group that comprised the bourgeoisie. Flaubert himself was born into a middle-class family. However, the term “bourgeois” is often used to indicate not only social class but also state of mind, a perspective on money, art, and knowledge. When Flaubert made scathing pronouncements about the bourgeoisie, he was mainly referring to the second meaning, a very vague idea indicating, as the quote implies, something like the antithesis of personal virtue. “Bourgeois” may be used to mean stupidity, greed, shallowness, hypocrisy, conservatism, philistinism, and a whole host of other human foibles. Madame Bovary does primarily describe middle-class people, but it does not directly attack the middle-class as such: only the failings of individual characters. However, the historical role of the French middle class is certainly a part of the story’s carefully rendered landscape.

Other Books Related to Madame Bovary

Many authors and critics have said that modernist literature as we know it would not exist without Madame Bovary: its fine psychological detail, the sharpness and beauty of its prose, the subtle harmony of its structure, and the innovation of free indirect discourse – a technique in which the author echoes the character described in style, tone, and pacing. Nabokov once said that without Flaubert there would be no Joyce, no Proust, and no Chekhov. Flaubert himself was interested by the emerging realist style in France, exemplified by the novels of Balzac. He sought to temper romantic ideals and excesses with realism’s honesty and clear-sightedness, and he often felt torn between the two impulses himself. Flaubert is said to have influenced the French nouveau roman, a mid-twentieth-century literary movement whose practitioners focused on style and fact at the expense of plot, character development, and narrative commentary.
Key Facts about Madame Bovary

Sued. After the publication of Madame Bovary, Flaubert was sued for the book’s obscene depictions of extramarital affairs. In expressing his outrage, the prosecutor identified some of the book’s key literary innovations, free indirect discourse and narrative ambiguity. The prosecutor stated in court: “Who can condemn this woman in the book? Nobody. Such is the conclusion. There is not in the book a character who can condemn her…. Would you condemn her in the name of the author’s conscience? I do not know what the author’s conscience thinks.”

His character, himself. Flaubert once said that when Emma took arsenic, he had awful stomach pains.