When Frankl first arrives at Auschwitz, he is forced to surrender his unpublished manuscript on logotherapy. Over the course of his time in the four camps in which he is imprisoned, Frankl realized that he badly wanted to rewrite this manuscript, and further, that he wanted to write another manuscript about psychology within concentration camps. Frankl turned his thoughts toward the manuscript when he was struggling, and used it as way to keep himself motivated to stay alive. For example, when one of his camps was infected with typhoid, Frankl wrote keywords from his manuscript on scraps of paper to keep his mind alert. In the second half of the book, Frankl uses the manuscript to symbolize hope for the future and the importance of having something outside of oneself to live for.

Get the entire Man’s Search for Meaning LitChart as a printable PDF.
"My students can't get enough of your charts and their results have gone through the roof." -Graham S.
Download 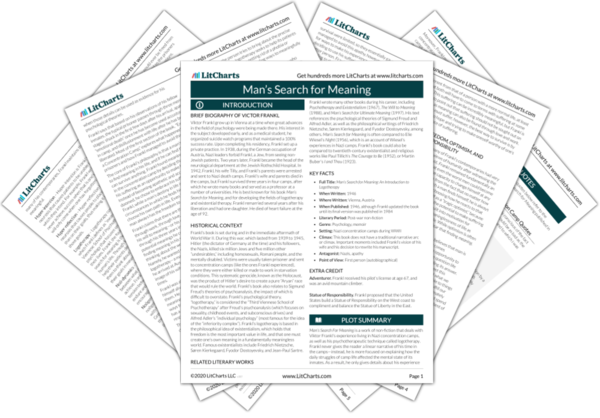 The timeline below shows where the symbol Frankl’s Manuscript appears in Man’s Search for Meaning. The colored dots and icons indicate which themes are associated with that appearance.

...had their possessions looted or destroyed by the guards. Frankl tried to save his scientific manuscript that he was carrying with him, but was forced to surrender it. This proved to... (full context)

...Frankl tried to keep his own mind busy and active by trying to rewrite his manuscript on scraps of paper. (full context)

...very quickly. When Frankl’s opportunity appeared, he hurried to collect some provisions and gather his manuscript scraps before fleeing. He made the rounds with his patients for a final time, but... (full context)

...to meaning was frustrated in Auschwitz and he was not able to work on his manuscript, the tension that frustration caused kept him alive and in a much better state of... (full context)