Download this LitChart! (PDF)
Teachers and parents! Struggling with distance learning? Our Teacher Edition on Marigolds can help.

Get LitCharts A+
Lizabeth is the narrator of the story. From an unspecified moment later in time, she remembers a difficult summer in rural Maryland when she lost her innocence and came of age. That summer, Lizabeth, her brother Joey, and their neighborhood friends are living in poverty, surrounded by dust and ugliness. The only splash of color is Miss Lottie’s marigolds, which the children hate because they’re too beautiful—they stand out against the ugliness of the town. One day, Lizabeth and her friends start decapitating a few of the marigolds, which makes Lizabeth feel ashamed. This marks the beginning of her transformation to adulthood, because she’s able to have complicated feelings about something that once would have felt simple to her. Lizabeth’s truly devastating moment of transition comes later, after she overhears her father sobbing—apparently he’s unable to find work, and his tears shake Lizabeth to her core, because she realizes that the world isn’t as stable or understandable as she once thought. In her bewilderment, Lizabeth takes out her rage on Miss Lottie’s flowers. She tramples and pulls them, destroying the entire garden, then looks up and sees Miss Lottie standing over her. But she sees Miss Lottie differently in this moment: she’s not a witch, just an old woman who grew dazzling marigolds. Lizabeth feels compassion for the first time in her life, an emotion that signals the loss of her innocence and transition to adulthood.

The Marigolds quotes below are all either spoken by Lizabeth or refer to Lizabeth. For each quote, you can also see the other characters and themes related to it (each theme is indicated by its own dot and icon, like this one:

I don’t know why I should remember only the dust. Surely there must have been lush green lawns and paved streets under leafy shade trees somewhere in town; but memory is an abstract painting—it does not present things as they are but rather as they feel.

Poverty was the cage in which we all were trapped, and our hatred of it was still the vague, undirected restlessness of the zoo-bred flamingo who knows instinctively that nature created it to be free.

Miss Lottie’s house was the most ramshackle of all our ramshackle homes.

For some perverse reason, we children hated those marigolds. They interfered with the perfect ugliness of the place; they were too beautiful; they said too much that we could not understand; they did not make sense.

Perhaps we had some dim notion of what we were and how little chance we had of being anything else. Otherwise, why would we have been so preoccupied with destruction?

Suddenly I was ashamed, and I did not like being ashamed. The child in me sulked and said it was all in fun, but the woman in me flinched at the thought of the malicious attack that I had led.

“Ain’t no man oughtta eat his woman’s food day in and day out, and see his children running wild. Ain’t nothing right about that.”

The world had lost its boundary lines. My mother, who was small and soft, was now the strength of the family; my father, who was the rock on which the family had been built, was sobbing like the tiniest child. Everything was suddenly out of tune, like a broken accordion. Where did I fit into this crazy picture?

I gazed upon a kind of reality which is hidden to childhood. The witch was no longer a witch but only a broken old woman who had dared to create beauty in the midst of ugliness and sterility.

For one doesn’t have to be ignorant and poor to find that life is barren as the dusty roads of our town. And I too have planted marigolds.

Unlock with LitCharts A+
Get the entire Marigolds LitChart as a printable PDF.
"My students can't get enough of your charts and their results have gone through the roof." -Graham S.
Download 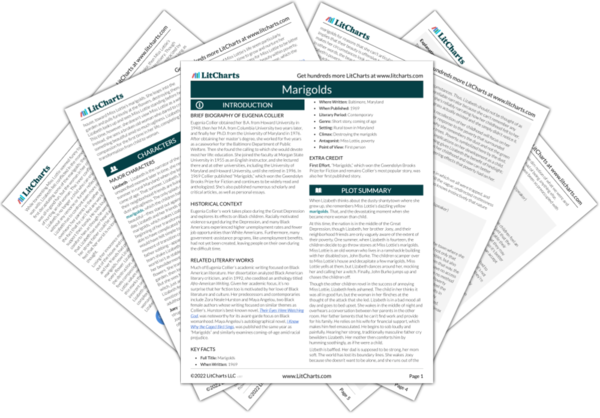 The timeline below shows where the character Lizabeth appears in Marigolds. The colored dots and icons indicate which themes are associated with that appearance.

When Lizabeth recalls the town that she grew up in, the thing she remembers most is dust.... (full context)

Lizabeth grew up in a shantytown in Maryland during the Great Depression. As she remembers it,... (full context)

As a child, Lizabeth and her friends were only vaguely aware of the extent of their poverty—they didn’t have... (full context)

In her childhood, Lizabeth lives with her parents and her younger brother, Joey. Her older siblings have already left... (full context)

During the summer Lizabeth and Joey spend most their days playing. They amuse themselves by doing things like drawing... (full context)

Lizabeth remembers the day that marked the end of her innocence. She is loafing under an... (full context)

As the children begin to gather stones, Lizabeth hesitates. She’s torn between wanting to join in the fun and feeling that it all... (full context)

Lizabeth wonders if, as children, they were not more aware of their poverty than she previously... (full context)

Lizabeth throws a stone and cuts the head off one of the marigolds. Miss Lottie yells,... (full context)

Mad with the power of inciting Miss Lottie’s rage, Lizabeth runs out of the bushes and chants “Old lady witch, fell in a ditch, picked... (full context)

Though the other kids are in a state of merriment after their fun, Lizabeth suddenly feels ashamed. She’s conflicted: the child in her says it was all in good... (full context)

Lizabeth wakes in the middle of the night and hears her parents talking through the thin... (full context)

Her father begins to sob, loudly and painfully. Lizabeth has never heard a man cry before—she didn’t know that men ever cried. She covers... (full context)

Finally, Lizabeth’s mother comforts her father by humming to him, as if he were a frightened child.... (full context)

Lizabeth lies awake even after her parents have stopped talking and gone to sleep. She feels... (full context)

Lizabeth runs as if the furies are after her, and Joey follows. She stops at Miss... (full context)

As Lizabeth gazes into Miss Lottie’s eyes, she sees a kind of reality that’s hidden from children.... (full context) 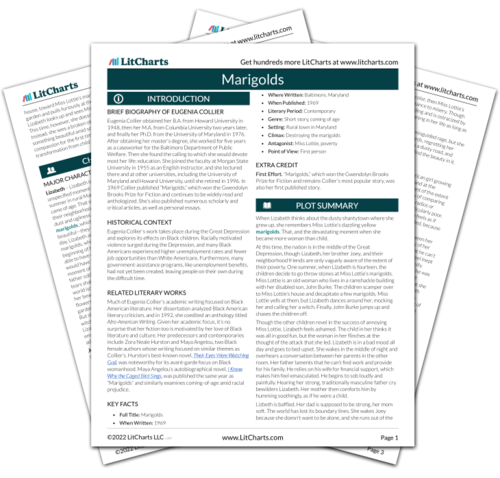 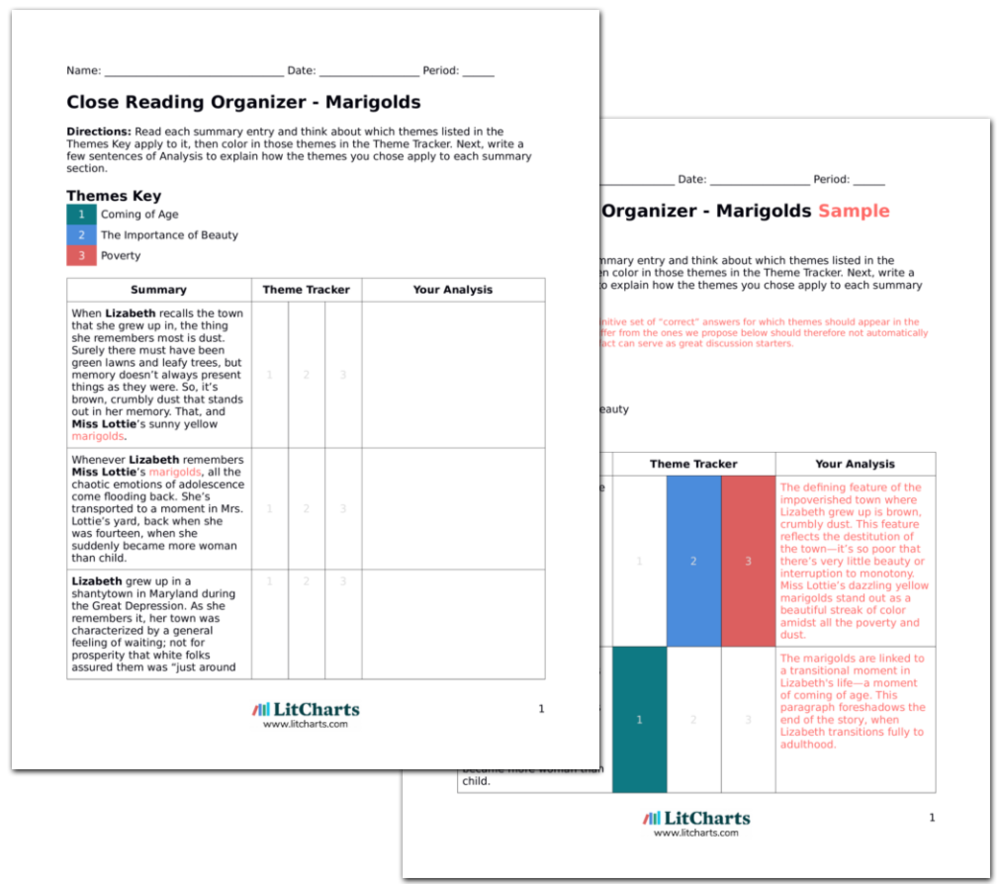