Get LitCharts A+
LitCharts assigns a color and icon to each theme in "Master Harold" … and the Boys, which you can use to track the themes throughout the work.

The most readily apparent cripple in the play, Hally’s father, isn’t just a cripple in body but, it seems due to his alcoholism and attitude, is spiritually crippled as well. He is a broken man unable to give Hally the love and affection he needs, unable to teach him moral lessons. In that respect he is like the apartheid-era South Africa in which the play unfolds. He is unable to provide Hally with much besides the unfair sense of entitlement and privilege that accompany the color of his skin. Hally’s education then, like Sam’s, is interrupted and broken, albeit for different reasons. Willie too, is a kind of moral cripple, unable to see that beating the women he cares about is the very thing that keeps them away. And though Hally, unlike his father, isn’t physically crippled, his ability to empathize (feel with) his friends and mentors—to even see them as friends and mentors— has been shattered by his family life, his culture, and his education. Sam, the fleetest dancer of the three, seems also to have the fleetest spirit, though in one respect at least he considers himself a failure—he was unable to fully open Hally’s eyes to the injustice and bigotry before them.

The ThemeTracker below shows where, and to what degree, the theme of Cripples and Broken Things appears in each scene of "Master Harold" … and the Boys. Click or tap on any chapter to read its Summary & Analysis.
How often theme appears:
scene length:
Scene
"Master Harold" …...
Get the entire Master Harold & the Boys LitChart as a printable PDF.
"My students can't get enough of your charts and their results have gone through the roof." -Graham S.
Download 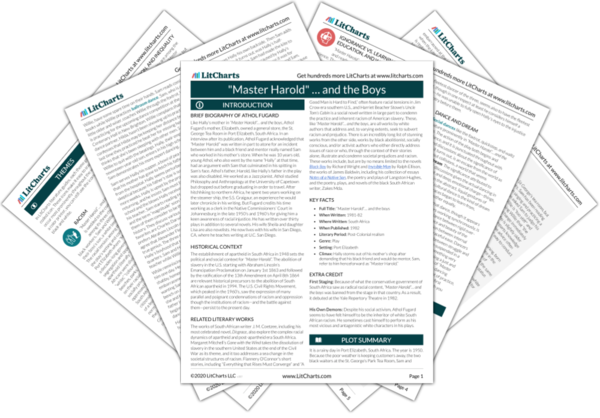 Cripples and Broken Things Quotes in "Master Harold" … and the Boys

Tried to be clever, as usual. Said I was no Leonardo da Vinci and that bad art had to be punished. So, six of the best, and his are bloody good.

I’ve heard enough, Sam! Jesus! It’s a bloody awful world when you come to think of it. People can be real bastards.

I know, I know! I oscillate between hope and despair for this world as well, Sam. But things will change, you wait and see. One day somebody is going to get up and give history a kick up the backside and get it going again.

“...Napoleon regarded all people as equal before the law and wanted them to have equal opportunities for advancement. All ves-ti-ges of the feu-dal system with its oppression of the poor were abolished.” Vestiges, feudal system and abolished. I’m all right on oppression.

…I got another rowing for hanging around the “servants’ quarters.” I think I spent more time in there with you chaps than anywhere else in that dump. And do you blame me? Nothing but bloody misery everywhere you went.

The sheer audacity of it took my breath away. I mean, seriously, what the hell does a black man know about flying a kite?...If you think I was excited and happy, you got another guess coming… When we left the boarding house to go up onto the hill, I was praying quietly that there wouldn’t be any other kids around to laugh at us.

HALLY: You explained how to get it down, we tied it to the bench so that I could sit and watch it and you went away. I wanted you to stay, you know. I was a little scared of having to look after it by myself.
SAM: (Quietly) I had work to do, Hally

Would have been just as strange I suppose, if it had been me and my Dad… a cripple man and a little boy! Nope! There’s no chance of me flying a kite without it being strange.

Don’t try to be clever, Sam. It doesn’t suit you. Anybody who thinks there’s nothing wrong with this world need to have his head examined... If there is a God who created this world, he should scrap it and try again.

There’s no collisions out there, Hally. Nobody trips or stumbles or bumps into anybody else. That’s what that moment is all about. To be one of those finalists on the dance floor is like… like being in a dream about a world in which accidents don’t happen.

It’s beautiful because that is what we want life to be like. But instead… we’re bumping into each other all the time. Look at the three of us this afternoon… Open a newspaper and what do you read? America has bumped into Russia, England is bumping into India, rich man bumps into poor man… People get hurt in all that bumping, and we’re sick and tired of it now.

HALLY: He’s a white man and that’s good enough for you.
SAM: I’ll try to forget you said that.

HALLY: To begin with, why don’t you start calling me Master Harold, like Willie.
SAM: Do you mean that?
HALLY: Why the hell do you think I said it?
SAM: If you make me say it once, I’ll never call you by anything else again

HALLY: I don’t know. I don’t know anything anymore.
SAM: You sure of that, Hally? Because it would be pretty hopeless if that was true. It would mean nothing has been learnt in here this afternoon, and there was a hell of a lot of teaching going on… 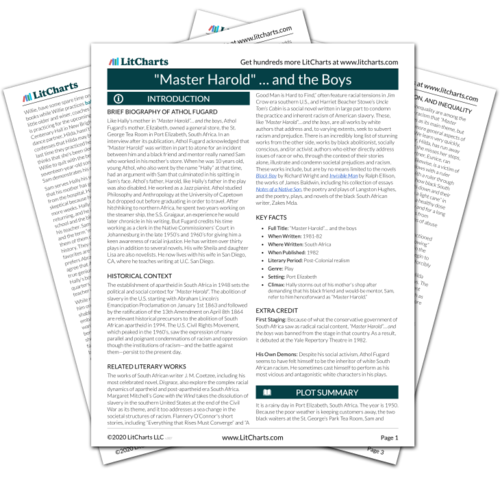 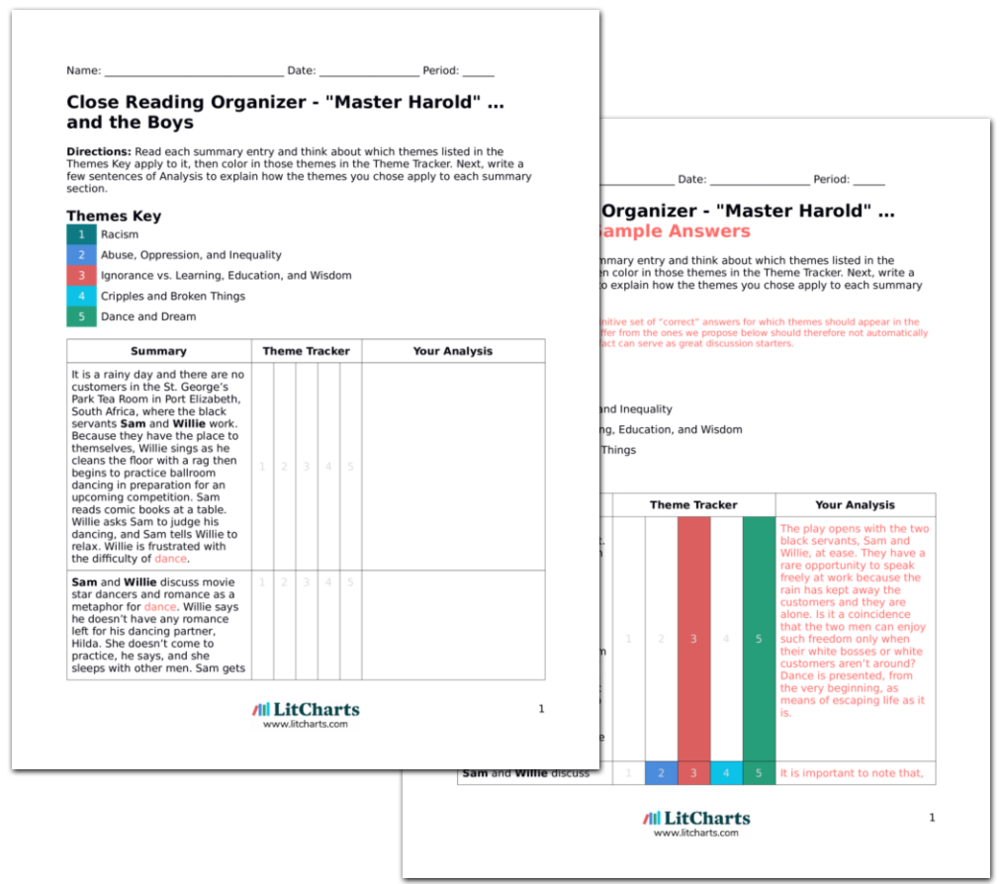