In the third and fourth parts of his book, Lewis moves from an analysis of the logical bases for Christianity to a discussion of how a Christian lives—i.e., how to translate God’s teachings into one’s day-to-day existence. Lewis emphasizes the importance of Christian “practice”: rituals, ceremonies, and other religious behaviors (e.g., praying, going to church, giving money to charity, etc.) that must be repeated again and again, sometimes against the Christian’s own will. It is not enough, Lewis argues, to merely believe in God and Christ; one must “exercise” this belief in the real world through the various forms of practice (an interpretation of Christianity that arguably reflects Lewis’s Anglican faith).

Lewis offers many different reasons for the importance of practice in the Christian religion. One of his most intriguing and controversial points is that Christianity is a religion of “the body as well as the mind.” At various points in the book, Lewis argues that Christianity is unique among world religions in glorifying the human body and encouraging its followers to respect their own bodies. Lewis even suggests that when good Christians worship Jesus Christ, they “feel” his presence in their bodies, not just their thoughts. While Lewis admits that he doesn’t know how, exactly, the human body can experience faith, he cites the religious importance of the body as a reason for such Christian rituals as Holy Communion, the act of ingesting wafer and wine that, according to Christian theology, either literally or symbolically become Jesus Christ’s blood and body. Lewis does not argue that all Christians must take Communion. However, he defends the practice of Communion on the grounds that it puts mankind’s entire being—body and mind—in touch with God. As a general rule, he argues that all Christians, regardless of their sect or denomination, must participate in some forms of practice as a way of engaging their bodies with God.

Another reason for the centrality of practice in Christianity is that practice is a vital reminder of the strength of Christian tradition. All Christians, regardless of their piety or passion, go through periods where they question their faith. In such times of crisis, Lewis argues, practice can be an important reminder of such doubters own religious belief. By praying in church, celebrating Christian holidays, etc., a reluctant Christian reminds herself that, while her own belief may be weak, the Christian religion itself remains strong.

The final—and perhaps most important—reason that Christianity requires practice, not just belief, is that practice and repetition are the best ways to foster genuine religious belief and passion. Lewis argues that Christianity requires various forms of practice and ritual in order to teach its adherents how to love God and Jesus. It is very difficult to start out loving God; however, humans simulate the love of God in the act of prayer, among other rituals. Gradually, the act of pretending to love God encourages genuine love for him. The notion that affected love leads to genuine love is one of the most famous ideas in Mere Christianity. Indeed, Lewis argues that when people pretend to like one another, they slowly begin to like one another. Thus, while it may be easy to make fun of arbitrary-seeming Christian practices like prayer, Communion, or Mass, Lewis argues that these practices, far from being arbitrary or absurd, are vital parts of the religion. By exercising one’s body and mind in praise of God, a good Christian can be reminded of the strength of the church and develop a sincere love for the almighty. 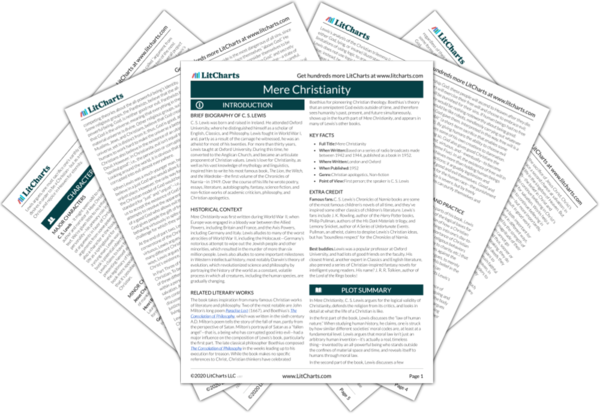 Below you will find the important quotes in Mere Christianity related to the theme of Christianity and Practice.
Book 2, Chapter 5 Quotes

There are three things that spread the Christ-life to us: baptism, belief, and that mysterious action which different Christians call by different names—Holy Communion, the Mass, the Lord's Supper. At least, those are the three ordinary methods […] I am not saying anything about which of these three things is the most essential. My Methodist friend would like me to say more about belief and less (in proportion) about the other two. But I am not going into that. Anyone who professes to teach you Christian doctrine will, in fact, tell you to use all three, and that is enough for our present purpose.

Morality, then, seems to be concerned with three things. Firstly, with fair play and harmony between individuals. Secondly, with what might be called tidying up or harmonizing the things inside each individual. Thirdly, with the general purpose of human life as a whole: what man was made for: what course the whole fleet ought to be on: what tune the conductor of the band wants it to play.

The application of Christian principles, say, to trade unionism or education,

must come from Christian trade unionists and Christian schoolmasters: just as Christian literature comes from Christian novelists and dramatists—not from the bench of bishops getting together and trying to write plays and novels in their spare time.

Most of the man's psychological makeup is probably due to his body: when his body dies all that will fall off him, and the real central man, the thing that chose, that made the best or the worst out of this material, will stand naked. All sorts of nice things which we thought our own, but which were really due to a good digestion, will fall off some of us: all sorts of nasty things which were due to complexes or bad health will fall off others. We shall then, for the first time, see every one as he really was.

Now suppose you come to a country where you could fill a theatre by simply bringing a covered plate on to the stage and then slowly lifting the cover so as to let every one see, just before the lights went out, that it contained a mutton chop or a bit of bacon, would you not think that in that country something had gone wrong with the appetite for food? And would not anyone who had grown up in a different world think there was something equally queer about the state of the sex instinct among us?

Let the thrill go—let it die away—go on through that period of death into the quieter interest and happiness that follow—and you will find you are living in a world of new thrills all the time. […] It is much better fun to learn to swim than to go on endlessly (and hopelessly) trying to get back the feeling you had when you first went paddling as a small boy.

That raises a terrible question. How is it that people who are quite obviously eaten up with Pride can say they believe in God and appear to themselves very religious? I am afraid it means they are worshipping an imaginary God. They theoretically admit themselves to be nothing in the Presence of this phantom God, but are really all the time imagining how He approves of them and thinks them far better than ordinary people.

Do not waste time bothering whether you 'love' your neighbor; act as if you did. As soon as we do this we find one of the great secrets. When you are behaving as if you loved someone, you will presently come to love him.

Crowns are mentioned to suggest the fact that those who are united with God in eternity share His splendor and power and joy. Gold is mentioned to suggest the timelessness of Heaven (gold does not rust) and the preciousness of it. People who take these symbols literally might as well think that when Christ told us to be like doves, He meant that we were to lay eggs.

What matters is the nature of the change in itself, not how we feel while it is happening. It is the change from being confident about our own efforts to the state in which we despair of doing anything for ourselves and leave it to God.

The Bible really seems to clinch the matter when it puts the two things together into one amazing sentence. The first half is, 'Work out your own salvation with fear and trembling,—which looks as if everything depended on us and our good actions: but the second half goes on, 'For it is God who worketh in you'—which looks as if God did everything and we nothing.

You never supposed that your actions at this moment were any less free because God knows what you are doing. Well, He knows your tomorrow's actions in just the same way because He is already in tomorrow and can simply watch you. In a sense, He does not know your action till you have done it, but then the moment at which you have done it is already 'Now' for Him.

And the present state of things is this. The two kinds of life are now not only different (they would always have been that) but actually opposed. The natural life in each of us is something self-centered, something that wants to be petted and admired, to take advantage of other lives, to exploit the whole universe. And especially it wants to be left to itself.