Download this LitChart! (PDF)
Teachers and parents! Struggling with distance learning? Our Teacher Edition on Milkweed can help.

Welcome to the LitCharts study guide on Jerry Spinelli's Milkweed. Created by the original team behind SparkNotes, LitCharts are the world's best literature guides.

A concise biography of Jerry Spinelli plus historical and literary context for Milkweed.

A quick-reference summary: Milkweed on a single page.

In-depth summary and analysis of every chapter of Milkweed. Visual theme-tracking, too.

Explanations of Milkweed's symbols, and tracking of where they appear.

An interactive data visualization of Milkweed's plot and themes.

As a child, Jerry Spinelli wanted to be either a cowboy or a professional baseball player. In high school, however, he stumbled upon writing as a future career path when his poem about a championship football game was published in a local paper. He majored in English at Gettysburg College and also took writing seminars at Johns Hopkins University. After writing four unpublished novels for adults, he once again found his path by accident when one of his stories caught the attention of a children’s publisher. As a result, Space Station Seventh Grade came out in 1982, and from then on, Spinelli wrote exclusively for kids. In 1990, Maniac Magee won the Newbery Medal. Spinelli now lives in Phoenixville, Pennsylvania, in the Philadelphia metro area. He and his wife, Eileen, had six children together, and they now have over 20 grandchildren.
Get the entire Milkweed LitChart as a printable PDF.
"My students can't get enough of your charts and their results have gone through the roof." -Graham S.
Download 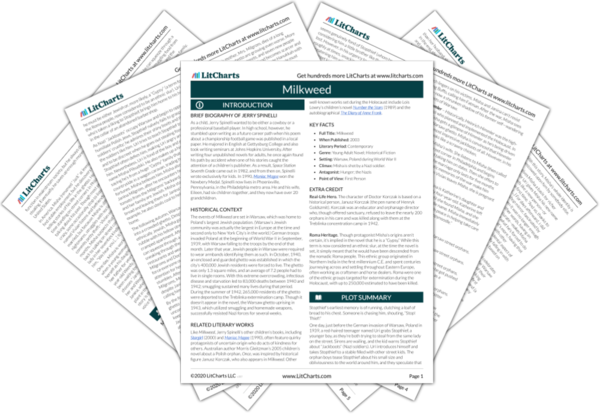 The events of Milkweed are set in Warsaw, which was home to Poland’s largest Jewish population. (Warsaw’s Jewish community was actually the largest in Europe at the time and second only to New York City’s in the world.) German troops invaded Poland at the beginning of World War II in September, 1939, with Warsaw falling to the troops by the end of that month. Later that year, Jewish people in Warsaw were required to wear armbands identifying them as such. In October, 1940, an enclosed and guarded ghetto was established in which the city’s 400,000 Jewish residents were forced to live. The ghetto was only 1.3 square miles, and an average of 7.2 people had to live in single rooms. With this extreme overcrowding, infectious disease and starvation led to 83,000 deaths between 1940 and 1942; smuggling sustained many lives during that period. During the summer of 1942, 265,000 residents of the ghetto were deported to the Treblinka extermination camp. Though it doesn’t appear in the novel, the Warsaw ghetto uprising in 1943, which utilized smuggling and homemade weapons, successfully resisted Nazi forces for several weeks.

Other Books Related to Milkweed

Like Milkweed, Jerry Spinelli’s other children’s books, including Stargirl (2000) and Maniac Magee (1990), often feature quirky protagonists of uncertain origin who do acts of kindness for others. Australian author Morris Gleitzman’s 2005 children’s novel about a Polish orphan, Once, was inspired by historical figure Janusz Korczak, who also appears in Milkweed. Other well-known works set during the Holocaust include Lois Lowry’s children’s novel Number the Stars (1989) and the autobiographical The Diary of Anne Frank.
Key Facts about Milkweed

Real-Life Hero. The character of Doctor Korczak is based on a historical person, Janusz Korczak (the pen name of Henryk Goldszmit). Korczak was an educator and orphanage director who, though offered sanctuary, refused to leave the nearly 200 orphans in his care and was killed along with them at the Treblinka concentration camp in 1942.

Roma Heritage. Though protagonist Misha’s origins aren’t certain, it’s implied in the novel that he is a “Gypsy.” While this term is now considered an ethnic slur, at the time the novel is set, it simply meant that he would have been descended from the nomadic Roma people. This ethnic group originated in Northern India in the first millennium C.E. and spent centuries journeying across and settling throughout Eastern Europe, often working as craftsmen and horse dealers. Roma were one of the ethnic groups targeted for extermination during the Holocaust, with up to 250,000 estimated to have been killed. 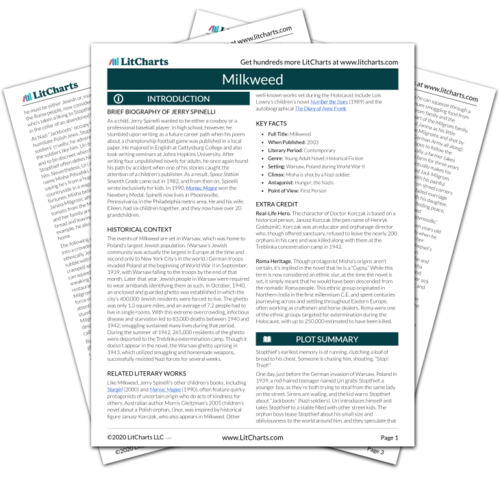 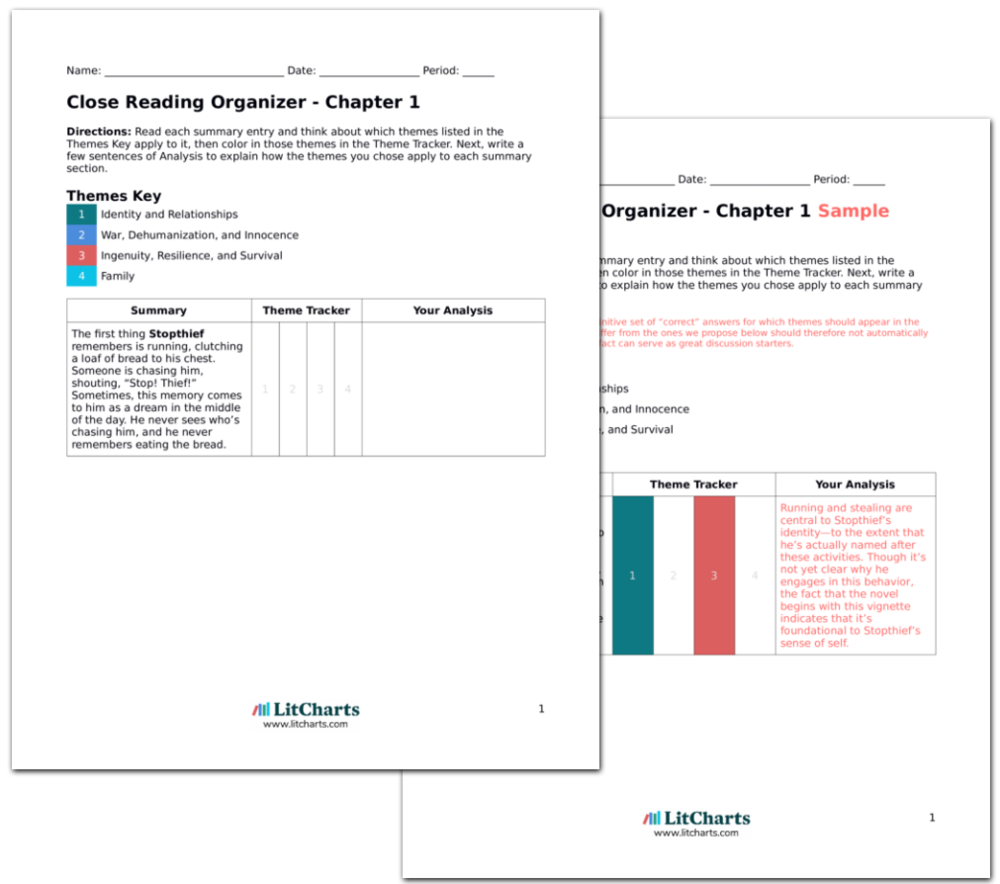