Download this LitChart! (PDF)
Teachers and parents! Struggling with distance learning? Our Teacher Edition on Minor Feelings can help.

Get LitCharts A+
Cathy Park Hong’s father grew up relatively poor in a village near Seoul, and as a child, he watched a U.S. soldier nearly murder his own father (Hong’s paternal grandfather) in cold blood during the Korean War. After the 1965 Immigration and Nationality Act enabled skilled Asian immigrants to get visas, Hong’s father pretended to be a mechanic and migrated to the U.S. with Hong’s mother. However, he spent most of his career working as a life insurance salesman in Los Angeles. Eventually he managed to buy an industrial warehouse, which funded Hong’s education. Yet Hong warns her readers against interpreting her father’s story as a classic “model immigrant” story: he was also a belligerent heavy drinker, and he was always distinctly aware of (and highly frustrated with) the racism he faced from white Americans.

When the 1965 immigration ban was lifted by the United States, my father saw an opportunity. Back then, only select professionals from Asia were granted visas to the United States: doctors, engineers, and mechanics. This screening process, by the way, is how the whole model minority quackery began: the U.S. government only allowed the most educated and highly trained Asians in and then took all the credit for their success. See! Anyone can live the American Dream! they’d say about a doctor who came into the country already a doctor.

Get the entire Minor Feelings LitChart as a printable PDF.
"My students can't get enough of your charts and their results have gone through the roof." -Graham S.
Download 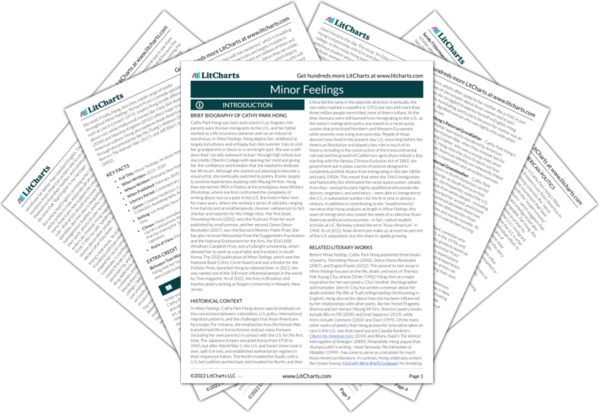 The timeline below shows where the character Cathy Park Hong’s Father appears in Minor Feelings. The colored dots and icons indicate which themes are associated with that appearance.

In Korea, Hong’s father grew up poor but succeeded in school. In 1965, the U.S. began allowing a few... (full context)

Hong’s father may sound like the kind of “model immigrant” who wouldn’t care about race, but actually,... (full context)

...not herbal medicine. When her college roommate’s father introduced himself as a Korean War veteran, her father refused to respond—and she scolded him in the car afterwards. He angrily asked if he... (full context)

...dragging Vietnamese doctor David Dao off an overbooked plane to open up more space. Like Hong’s father , Dao dresses conservatively “to project a benign and anonymous professionalism.” While the media avoids... (full context)

...have strong family values, Hong saw her neighbors’ families and professional lives constantly falling apart. Her father ’s best friend (and her dentist) drank himself to death; another was murdered by his... (full context)

...group of white kids mocked her accent, and one girl kicked her to the ground. Hong’s father yelled at the girl, but Hong was terrified that the neighbors would retaliate. Five years... (full context)

...it, besides curse words, and they put their own spin on American customs. For instance, Hong’s father has a habit of telling everyone “I love you.” She held off on using her... (full context)

...hard to satisfy their parents—either to pay off debts or fulfill unrealistic expectations. But fortunately, Hong’s father ran a successful business and supported her interest in poetry. In contrast, her mother was... (full context)

...it as an “answer key” for interpreting Dictee, and emphasizing her personal connections to Cha. Hong’s father grew up in Busan as a refugee at the same time as Cha; her uncle... (full context) 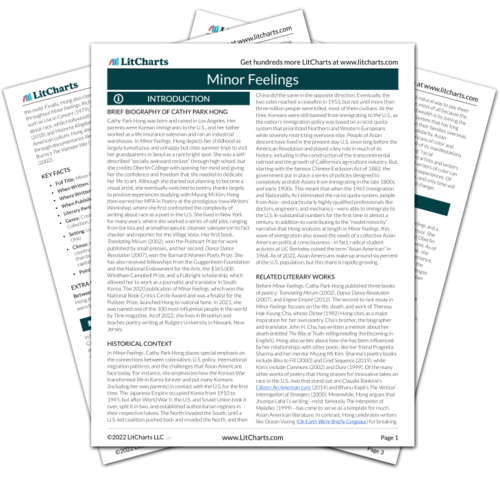 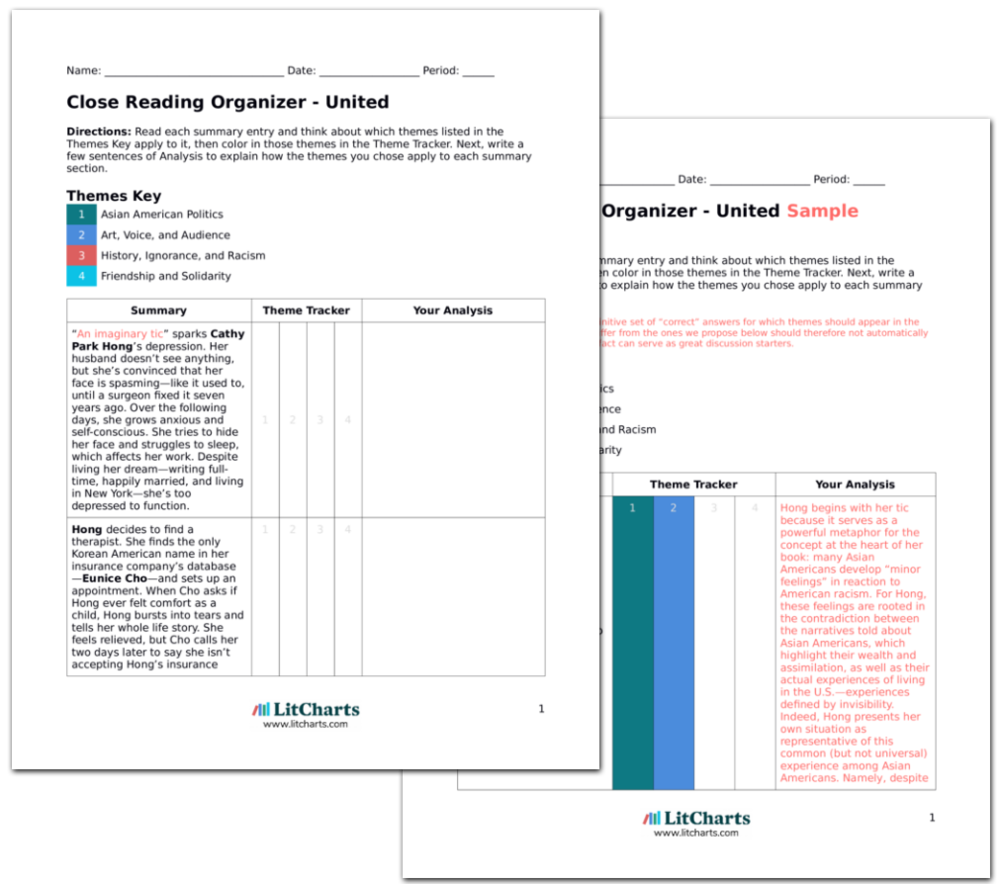