Download this LitChart! (PDF)
Teachers and parents! Struggling with distance learning? Our Teacher Edition on Moll Flanders can help.

Welcome to the LitCharts study guide on Daniel Defoe's Moll Flanders. Created by the original team behind SparkNotes, LitCharts are the world's best literature guides.

A concise biography of Daniel Defoe plus historical and literary context for Moll Flanders.

A quick-reference summary: Moll Flanders on a single page.

In-depth summary and analysis of every section of Moll Flanders. Visual theme-tracking, too.

Explanations of Moll Flanders's symbols, and tracking of where they appear.

An interactive data visualization of Moll Flanders's plot and themes.

Defoe was born in the parish of St. Giles Cripplegate in London to James Foe, a successful candle-maker and butcher, and his wife, Anne, who died when Defoe was just 10 years old. Defoe’s father was a Presbyterian dissenter—meaning he did not follow the Church of England—and even though it was illegal to worship outside the Church of England, Defoe was educated at a dissenting academy in London, where he most likely attended a Unitarian church. After his schooling, Defoe became a merchant, dealing mostly in wool and wine, and he married Mary Tuffley, a wealthy merchant’s daughter, in 1684. Defoe was accused of marrying Mary for her dowry, but though it is said they had a rocky union, they were married for 47 years and had eight children together. In 1685, he joined the Monmouth Rebellion, which attempted to overthrow King James II of England, but Defoe was later pardoned. After Mary II and William III were crowned as Queen and King of England in 1689, Defoe worked as a trusted adviser and spy for King William. By 1692, Defoe was bankrupt and later arrested and jailed for excessive debts. After he was released from prison, Defoe travelled for a bit before returning to England in 1696. Around this time, Defoe began writing—mostly political, economic, and social essays and pamphlets—and published An essay upon projects, a series of writings on society and economics, in 1697. In 1703, Defoe was arrested for his political and religious views—like his father, Defoe was a nonconformist—and he was sent to Newgate Prison, the same prison where Moll Flanders is held in Defoe’s novel of the same name. He was later released and went on to write over 300 essays, novels, and pamphlets. He published his most famous work, Robinson Crusoe, in 1719; however, the book was originally published with Robinson Crusoe as the author as well as the title character and was received much like a travel journal. Defoe wrote Moll Flanders in 1722, but the book was published without an author and was assumed to be an autobiography. It was not until 1770, many years after Defoe’s death, that he was credited as the book’s author by a London bookseller. He wrote one of his last books, The Complete English Tradesman, a political work that also focuses on trade, economics, and marriage, in 1726. Defoe died of a likely stroke in 1731, at which time he was penniless and still running from creditors. He was 70 years old.
Get the entire Moll Flanders LitChart as a printable PDF.
"My students can't get enough of your charts and their results have gone through the roof." -Graham S.
Download 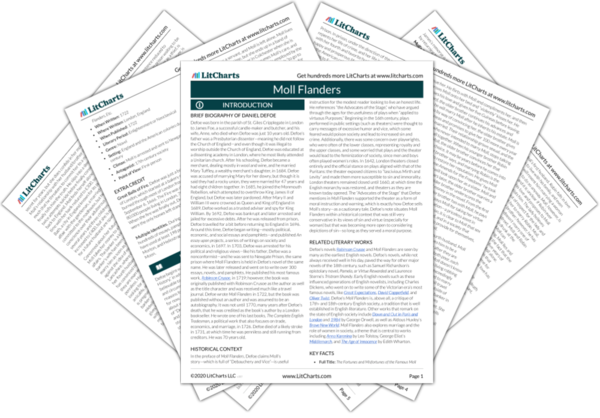 In the preface of Moll Flanders, Defoe claims Moll’s story—which is full of “Debauchery and Vice”—is useful instruction for the modest reader looking to live an honest life. He references “the Advocates of the Stage,” who have argued through the ages for the usefulness of plays when “applied to virtuous Purposes.” Beginning in the 16th century, plays performed in public settings (such as theaters) were thought to carry messages of excessive humor and vice, which some feared would poison society and lead to increased sin and crime. Additionally, there was some concern over playwrights, who were often of the lower classes, representing royalty and the upper classes, and some worried that plays and the theater would lead to the feminization of society, since men and boys often played women’s roles. In 1642, London theaters closed entirely and the official stance on plays aligned with that of the Puritans: the theater exposed citizens to “lascivious Mirth and Levity” and made them more susceptible to sin and immorality. London theaters remained closed until 1660, at which time the English monarchy was restored, and theaters as they are known today opened. The “Advocates of the Stage” that Defoe mentions in Moll Flanders supported the theater as a form of moral instruction and warning, which is exactly how Defoe sells Moll’s story—as a cautionary tale. Defoe’s note situates Moll Flanders within a historical context that was still very conservative in its views of sin and virtue (especially for woman) but that was becoming more open to considering depictions of sin—so long as they served a moral purpose.

Other Books Related to Moll Flanders

Defoe’s novels Robinson Crusoe and Moll Flanders are seen by many as the earliest English novels. Defoe’s novels, while not always received well in his day, paved the way for other major novels of the 18th century, such as Samuel Richardson’s epistolary novel, Pamela, or Virtue Rewarded and Laurence Sterne’s Tristram Shandy. Early English novels such as these influenced generations of English novelists, including Charles Dickens, who went on to write some of the Victorian era’s most famous novels, like Great Expectations, David Copperfield, and Oliver Twist. Defoe’s Moll Flanders is, above all, a critique of 17th- and 18th-century English society, a tradition that is well established in English literature. Other works that remark on the state of English society include Down and Out in Paris and London and 1984 by George Orwell, as well as Aldous Huxley’s Brave New World. Moll Flanders also explores marriage and the role of women in society, a theme that is central to works including Anna Karenina by Leo Tolstoy, George Eliot’s Middlemarch, and The Age of Innocence by Edith Wharton.
Key Facts about Moll Flanders

Great Balls of Fire. Defoe was just a boy during the Great Fire of London, which started at a bakery on Pudding Lane and burned through most of London from September 2 to September 6, 1666. The Fire was devastating, and of the 80,000 people living in London, 70,000 were left homeless. When the fire was finally out, Defoe’s house and two others were the only homes left standing in Defoe’s neighborhood.

Multiple Identities. During Defoe’s career, in which he wrote hundreds of essays, pamphlets, and novels, he was known to have used at least 198 pen names, including T. Taylor, Andrew Morton, and Heliostrapolis, secretary to the Emperor of the Moon. 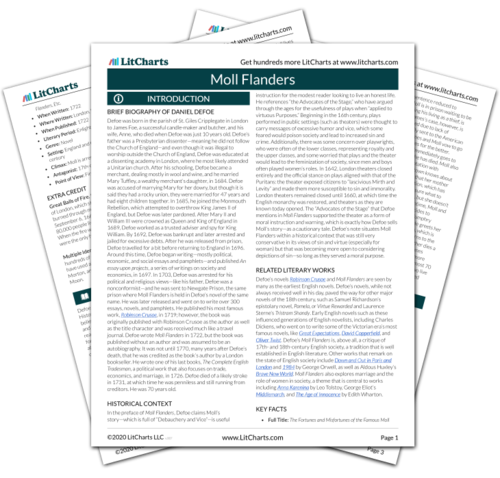 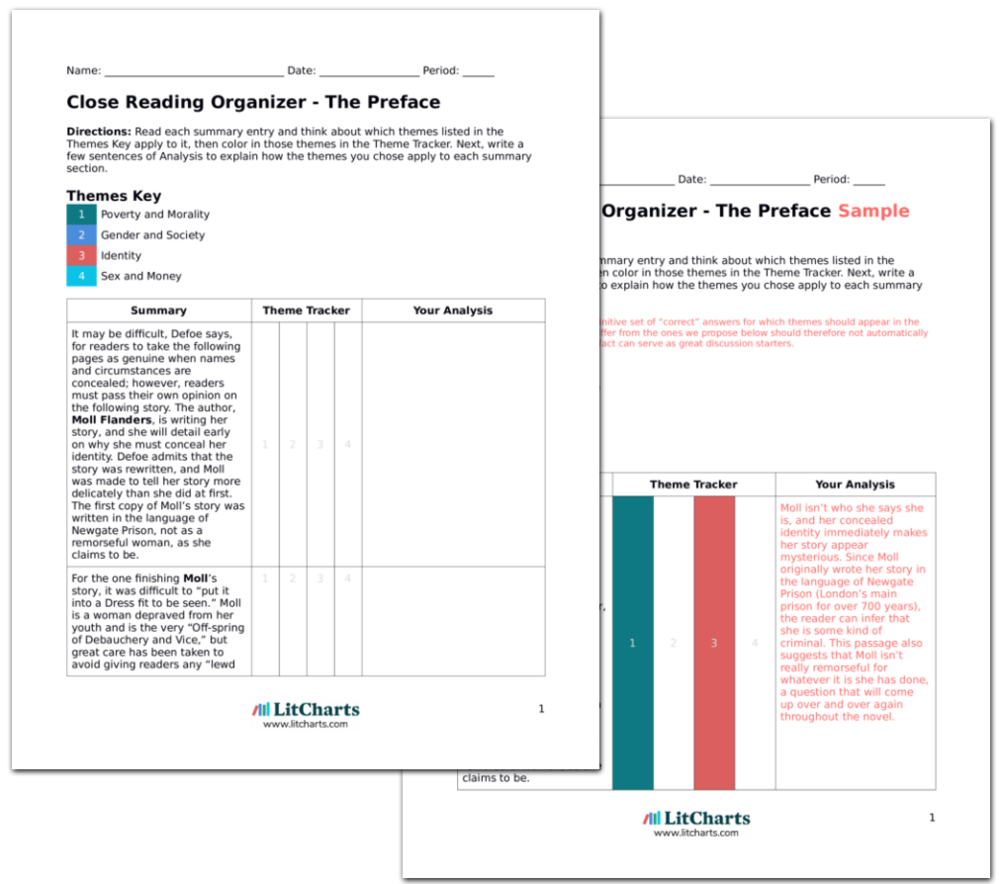